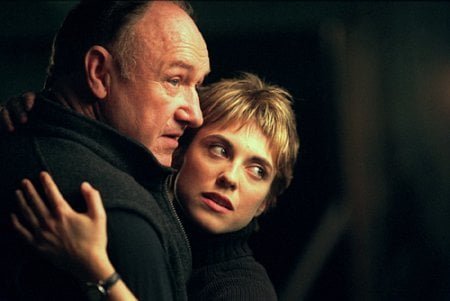 The job goes sour when Joe Moore (Gene Hackman) gets his kisser dead center on a video surveillance tape during a daring, daytime jewelry store robbery. When his fence, Bergman (Danny DeVito), reneges on paying off Joe's crew with their share of the loot, Moore is forced to do One Last Job before he can get away with his pretty young wife, Fran (Rebecca Pidgeon), and sail off into the sunset in David Mamet's "Heist."

Helmer Mamet has made a career of examining the hard-boiled side of life with his dog-eat-dog real estate world in the Pulitzer Prize winning play, "Glengarry Glen Ross," (translated to the screen in 1992 by director James Foley) and his directing debut with the con game drama "House of Cards." He delves into the hard crime scene with his latest opus about a master criminal trying to extract himself from his longtime life of crime and danger.

Hackman and Delroy Lindo, as Joe's colleague, confidant and friend, Bobby Blane, have good chemistry between them as longtime partners in crime but they are constrained by the lack of dimension Mamet gives their characters. The script, by the director, is too busy with its intrigue within intrigue and a keep-you-guessing who is going to do what to whom and do you think it's going to hurt? There is the author's typical snappy dialog like Joe's declaration that "I wouldn't clear my throat without a backup plan." Or, when Joe talks about his dangerous wife Fran: "She could talk her way out of a sunburn," it's like eating popcorn - you enjoy the rapid fire banter and quips while you're watching, but it is all soon forgotten as you walk out of the theater.

While Gene Hackman and Lindo fare OK with their portrayals of the veteran crooks, Danny DeVito and Rebecca Pidgeon suffer from the experience. DeVito renders little more than line reading to his character Bergman, unconvincingly delivering Mamet's noir dialog. The helmer's spouse, Pidgeon, is just plain wrong for the role of strong partner/loyal wife/femme fatale Fran. Where the character should have come across with strength and mystery, she feels more confused and ill motivated. The implication, by the film's end, is that Fran is not just another tool of Joe's trade and should not be treated lightly - a woman scorned and all that stuff. Sam Rockwell is adequate as Bergman's mole during the Big Heist, but improperly conceived as a love interest for Fran. Ricky Jay, a seasoned veteran to character acting, finally gets some of the limelight as one of Joe's permanent crew members, Pinky Pincus.

Techs are straightforward without bringing attention to anything in particular. Robert Elswit ("Magnolia") shoots the action sequence, especially the machinations of the heist, with rapid fire camera work and a seconds-ticking-away imperative of getting the job done before the law falls down upon the thieves ears. The straightforward crime sequences are convoluted with the intrigues of Mamet's tale, though. The scam within a scam within a scam premise where loyalties are questioned and re-questioned gets tedious after a while and is a distraction to the caper itself. Costuming by Renee April covers the bases well as the crime planners must layer disguise over disguise as they move forth on executing the Swiss Job, as the last big heist is called, stealing millions in Geneva-bound gold ingots.

The film noir that Mamet strives for is lost in the many twists and turns of plot manipulation that make up the bulk of "Heist." The fine actors in the leads were cheated from having the characters they deserve and fall prey to the cat's cradle-like plot.