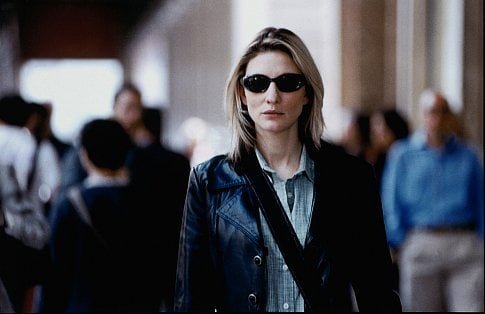 Frustrated by her attempts to bring a drug trafficker to justice through the Italian police, widowed English teacher Philippa Placard (Cate Blanchett, "Bandits") gets radical and plants a bomb in the office which serves as a front for Vendice (Stefano Santospage). Things go horribly wrong and four innocent civilians, including two children, are killed while Vendice survives. Philippa learns of the tragedy during a police investigation and her anguish captures the heart of a young Carbinieri, Filippo (Giovanni Ribisi, "Boiler Room"). The lovestruck lieutenant successfully plots their escape, but from her hell, can Philippa attain "Heaven?"

German director Tom Tykwer has explored fate and chance in his films "Run, Lola, Run" and "The Princess and the Warrior," falling far short of the works of the late, great Polish director Krzysztof Kieslowski. Working from a script by the master himself (and Kieslowski's writing partner Krzysztof Piesiewicz), Tykwer stifles his more obvious, showy tendencies and the restraint proves a good thing. Unfortunately, the film doesn't sustain its initial promise with a jarring, new-agey tone creeping into the second half.

The film begins with Filippo and an instructor speaking over helicopter flight training animation. 'You can't keep flying higher,' warns the instructor. 'How high can I fly?' asks Filippo, as the camera pans up into a blue video sky.

With marvelous economy, Tykwer builds unbearable suspense using Hitchcock's old maxim on showing your audience the bomb. Philippa prepares her explosive and purposely sets off towards a futuristic office building. Stepping off a curb, she's almost killed by a motorbike as she's en route to deliver death. She enters the building, heads upstairs and engages a timing device. A father and his two little girls wait for an exterior glass elevator to descend. Creating an embarrassing diversion with Vendice's secretary, Philippa slips her bomb into his wastebasket and departs. The trio head up in the elevator. A cleaning woman empties Vendice's basket into her larger one. Philippa calls the secretary with a demand that she come downstairs to stop her car alarm. The cleaning woman waits for an elevator. Philippa rides an escalator downwards towards the subway while in the distance, an elevator creeps up the side of the building. It arrives with three occupants and the father convinces the janitress there's room. We watch the doors close from a corridor. A few seconds later we hear an explosion and the elevator doors twist open enough to show the light from outside.

Filippo, who we learn is following in his retired police chief father's (Remo Girone) footsteps, falls in love with the anguished Philippa and plots an elaborate escape, then enables her vigilantism before the duo shave their heads and make off into the Italian countryside. Filippo's dad meets the lovers and provides money. Philippa asks a friend, Regina (Stephania Rocca, "Love's Labour's Lost"), to hide them, but Regina warns that helicopters have already surveyed her farm. Fatalistically, the two arrive there anyway.

While Kieslowski's voice is clear in the film's first half, he seems to lose his way somewhat in the second and Tykwer's filmmaking style emerges more strongly, the latter half recalling "The Princess and the Warrior's" lovers on the run right down to a bit of fancy involving a getaway vehicle. The film begins to acquire the artificiality of the opening training animation. Kieslowski's heavy-handedness in giving his leads the same name, and then the same birthday, seems out of character. The actors' relationship becomes more symbolic and less realistic.

Blanchett is stunningly photographed and delivers a fine performance through most of the film. She nails the pivotal scene where she learns what her action has wrought. Ribisi is also good, although his character is more symbolic. Younger than Philippa, Filippo reflects the children she has killed and the innocence Vendice has destroyed. (He's cooed over by a shopkeeper who admires his new uniform and has an odd bed wetting incident.) However, when the two run bald-headed through the hills they're just not believable as a couple in love.