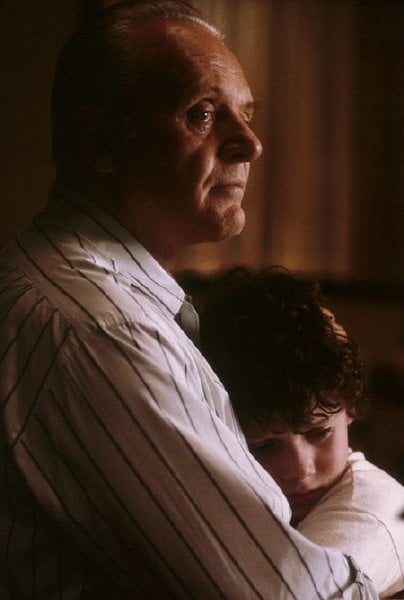 Screenwriter William Goldman ("The Princess Bride") has solved what makes so many of King's more recent writings problematic by stripping out the silly supernatural aspects of his novella and focusing on the human drama. While there are a couple of small, forgivable bumps in the adaptation (which may be attributable to editing and only slightly affect story clarity), director Scott Hicks ("Shine," "Snow Falling on Cedars") has turned in a film in the tradition of King adaptations "Stand By Me" and "The Shawshank Redemption."

Bobby-o, as his mother calls him, is disappointed when his eleventh birthday gift isn't the Schwinn bike he's had his eye on, but a library card. Yeah, it's an adult library card, but he knows it was the fact that it was free that caused his mother to choose it. Buddy Carol's quick to point out that Bobby's mom always has new clothes, but he defends her, noting her job in an office requires her to look nice.

When Ted offers Bobby a job reading him the newspaper for $1 a week, Bobby's thrilled - he can save for his bike. Mom reluctantly agrees, as long as they remain on the porch. But what Ted really needs is for Bobby to keep an eye out for 'the low men' in their flashy cars, men out to exploit Ted for a mysterious power he has. While Ted enriches Bobby's life with literature and friendship, Bobby's exposed to violence and treachery, becoming a young adult in the process.

Scott Hicks brings us his third period tale of a tortured adult reflecting on the lost innocence of his youth. This is a beautiful production, with Virginia perfectly standing in for an old New England town (production design by Barbara Ling, Art Direction by Mark Worthington, Set Decoration by Leslie E. Rollins). Kids eat dinner on TV trays in front of black and white televisions playing "The Lone Ranger" and Providence pool halls are cool and shadowy. The sound mix by Tod A. Maitland adds to the nostalgic feel with a background composed of barking dogs, wind chimes and cicadas. Cinematographer Piotr Sobocinski ("Red") composes with a golden, backlit glow in his last screen credit (the film is dedicated to him).

Hopkins never once recalls Hannibal Lecter in his sensitive portrayal of a man on the run willing to make time for a young boy. His accent is too refined for a man who moves in with all his belongings in a paper bag, but that's a small quibble. Hope Davis gives her best performance to date as a self-centered woman who gets more than she deserves before her eyes are opened to her own selfishness. Yelchin and Boorem are great as the kids (we've had a wealth of child actors of late). Celia Weston ("Snow Falling on Cedars") adds as a bartender who helps Bobby connect with his late father and Alan Tudyk ("A Knight's Tale") plays a pivotal three-card monte pitchman with just the right amount of hucksterism and growing frustration. Adam Lefevre ("You Can Count on Me") personifies the piggish machismo of Liz' Garfield's boss, Donald Biderman. David Morse ("Dancer in the Dark") plays the adult Bobby in the films' bookending scenes.

"Hearts in Atlantis" is a moving nostalgia piece where an underlying darkness encroaches on a small town summertime childhood.