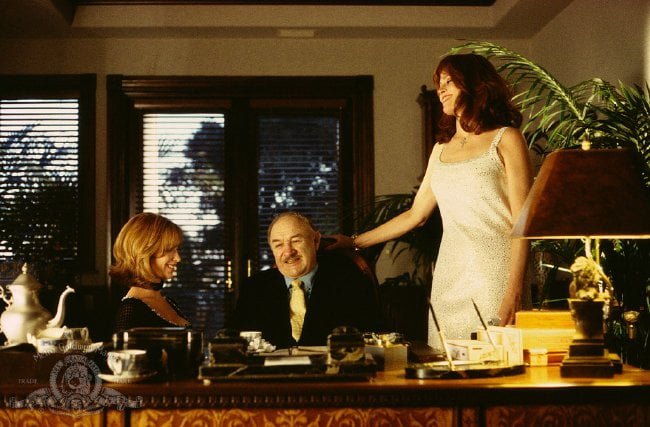 Max (Sigourney Weaver) lures wealthy men into marriage so daughter Page (Jennifer Love Hewitt) can seduce them and the duo can cash in on a quick settlement. Page is itching to con solo, so mom sets up a bankruptcy ruse to ensure her cooperation for one, last big Palm Beach score in "Heartbreakers."

This female rendition of "Dirty Rotten Scoundrels" doesn't break any new ground, but is more entertaining than it has any right to be due to its talented cast who are clearly enjoying their own shenanigans.

The film opens at Max's marriage to Dean Cummano (Ray Liotta), a formerly womanizing chop shop owner who clearly adores her. Max plays Dean hilariously, dancing til dawn before slipping off into champagne-induced snoring on their wedding night. The next morning a contrite Max makes a nauseous dash to the bathroom, so Dean decides to drop in at the office before embarking on their honeymoon. There, planted as his new secretary is Page, with lethal cleavage, a skirt barely covering her butt, and a propensity for dropping things. Max discovers the two in a compromising position and makes off with her new Mercedes and 300 grand.

After getting busted by the IRS (which turns out to be a mother to daughter scam played by old buddy Anne Bancroft), the two head to Palm Springs and pick William B. Tensy (Gene Hackman), a billionaire tobacco man, as their next sting. While Max reinvents herself as Russian Olga at an auction, Page tries to set up her own mark, but instead gets entangled with local bartender Jack (Jason Lee, "Almost Famous"), who, she's informed, owns the bar and the two million dollar parcel of land its situated on. Meanwhile, Dean decides he can't live without his ex-wife and makes his way to Florida.

As written by Robert Dunn, Paul Guay and Stephen Mazur, "Heartbreakers" is a fairly typical slapstick caper comedy which would have been pretty limp in lesser hands (and indeed, Love Hewitt's on again, off again seduction of Jack paints her as a psychotic harpy and becomes annoying). Director David Mirkin ("Romy and Michele's High School Reunion") lets his cast of pros run with it, though, to surprisingly entertaining results.

Sigourney Weaver, looking smashing at 50, revels as the femme fatale whose early abandonment when pregnant makes her overprotective of her daughter's potential romantic entanglements. An early bet between Max and Page to get an unsuspecting dupe (Kevin Nealon) to buy one of them a drink has Max hilariously trump Page with smarts over youthful sex appeal. Put on the spot at a Russian eatery, 'Olga' pays off a wised up waiter (Yakov Smirnoff) and ditches a Russian folk song to deliver a campy version of 'Back in the U.S.S.R.'

Liotta puts a comic spin on past wiseguy performances and turns up the notch on physical comedy. He's terrific, even bringing warmth to his character. Gene Hackman is riotously repulsive as the constantly smoking billionaire. The always likeable Jason Lee's laid back lover is such a nice guy it's a bit of a head scratcher why he'd fall for Page, although he presumably can see the softness beneath the brittle surface. Love Hewitt proves herself as a pratfaller and mostly keeps her own among this cast of seasoned pros. Nora Dunn adds some sharpness as Tensey's maid.