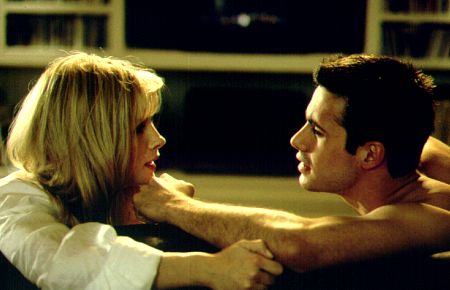 Pretty young art restorer Amanda Pierce (Monica Potter) has a great job at the Metropolitan Museum of Art, but you can't say the same about her luck with men. When she catches her latest beau in the, shall we say, arms of another woman, a model, she rushes away and gets an apartment with, guess what? A bunch of models in "Head Over Heels."

When naive art restorer Amanda (Monica Potter, "Patch Adams") finds her new boyfriend in bed with a model, she starts looking for a new apartment in the Big Apple and, after a brief stay with friend Lisa (China Chow, "The Big Hit"), finds a fabulous one. The hitch? She must share it with four models. Amanda, still smarting from her bad relationship, also falls "Head Over Heels" for Jim (Freddie Prinze Jr.), a guy she 'meets cute' in her new building's lobby (she's sexually attacked by his Great Dane, Hamlet).

Amanda's four new roomies claim to have banded together because they're the only four non-smoking models in NYC, but they're really a cliched United Nations of hair color. Holly (Tomiko Fraser) represents the African American, Candi (Sarah O'Hare) is a ditzy blond Aussie, Jade (Shalom Harlow, "In and Out") is the brunette and Roxanna (Ivana Milicevic, "Enemy of the State"), a flame haired Russian. They immediately make it their cause to make over the already stunning Amanda and get her connected with Jim, the fashion executive whose apartment can be spied on from their living room. Meanwhile, Amanda's coworkers (the flip side of her roomies comprised of three batty old women and her lesbian friend Lisa) also push her towards romance.

As soon as attraction between the two stars is established, the film takes an absurd twist into "Rear Window" territory when Amanda (and none of her roommates) believes she sees Jim murder a model. The police (wisely) blow off the girls as bubbleheads, so they begin to tail Jim. Disgustingly unfunny bathroom humor, in a desperate attempt to connect with the successful gross out humor of "There's Something About Mary" and "Meet the Parents," ensues.

This script - (Screenplay and Story By Ron Burch & David Kidd; Story By Ed Decter and John Strauss, "There's Something About Mary") is the sorriest piece of work that's been greenlit in over a year of weak Hollywood product. The smallest details are ripped off from Amanda's profession to an aquarium scene that recalls "Manhattan" to a climatic Amanda utterance that originated in "Sid and Nancy!" Director Mark Waters ("The House of Yes") keeps focus on his relatively small cast in what must be the deadest Fashion Week in NYC history.

I have a rule that no film receives an F rating if it has anything at all going for it. While the cast is bland with a capital 'B,' O'Hare and Milicevic bring some personality to the lame proceedings. Technically the film is adequate.

"Head Over Heels" has its head firmly planted someplace other than over its heels.

In a word, "Head Over Heels" is a mess. It starts off as offbeat romantic comedy with Amanda, a fish out of water, thrown into a pool of sharks - her four super-model roomies, Jade (Shalom Harlow), Roxana (Ivana Milicevic), Candi (Sarah O'Hare) and Holly (Tomiko Fraser). Their goal is to get Amanda a man and things progress along this path, inanely, for a while. Then, suddenly, the flick morphs into a rip-off (the filmmakers probably call it an homage) to Alfred Hitchcock's "Rear Window" and a totally silly murder mystery.

When Amanda agrees to pay her roommates $500 a month for what is essentially a closet, she enters a world where men constantly hang around the front door of the gorgeous models in hopes of getting the privilege to lavish money upon one or all of the beautiful girls. As the five become friends, the models take on the quest to find Amanda the man of her dreams. This turns into a Peeping Tomasina tale when Amanda and her new buddies spy on a handsome neighbor, Jim Winston (Freddie Prinz, Jr.), a fashion executive.

Amanda gets weak in the knees when she finally meets Jim, a condition that only used to happen when she saw a great painting, and true love appears imminent. At this point, about 45 minutes into "Head Over Heels," things twist and Amanda believes she has witnessed murder of a woman, by her new amour, in his shade-drawn apartment. The police, of course, find nothing and treat Amanda and her girlfriends as a bunch of bubbleheads.

The girls decide to forego the police and begin their own investigation of events. But, this becomes muddled and confused as we lose sight of "the murder." Is Amanda looking to solve the supposed killing or is she looking for Mr. Right? It becomes apparent that it's the latter she wants as she romances and beds Jim, even though she's remains uncertain about his possible murderous streak. Everything is tied up, sloppily, by the film's end.

The story for this mess is attributed to a committee of writers - John J. Strauss, Ed Decter, David Kidd and Ron Burch - and it shows in its scattershot approach to the disjointed material. Two of the hacks responsible for "Head Over Heals." Strauss and Decter, hale from "There's Something About Mary," and bathroom humor pervades the whole tale, mostly in poor taste. Wee-wee and toilet jokes, number two gags, (unfulfilled) T&A humor and other childish whimsy are used to replace a real story with what amounts to 90 minutes of unfunny vignettes.

The press material for "Head Over Heals" touts Freddie Prinz, Jr., as the Cary Grant of the new millennium. He's not. In fact, this extraordinarily bland actor never seems to change from one film to the next. His expressions vary between blank and uncomfortable and he gives no life to his dual character here. Oh, yeah, you find out in the second half that Jim Winston is really Bob Smoots, an FBI agent working under cover on some case or another. But, who really cares?

Top-billed Monica Potter is pretty enough as Amanda, but her good looks can't help her get around the horrible script. The camera loves to look at her in close up and she suffers the least, of the two leads, from the bad writing. The four women playing Amanda's roommates are a quartet of good-looking ladies, providing ample eye candy. Sarah O'Hare comes across best, in a slapstick way, as Aussie model Candi. Her ongoing cosmetic surgeries and comic pratfalls rep some of the few laugh throughout the film. The rest of the cast should have stayed home.

Director Mark Walters shoulders the burden of responsibility for "Head Over Heals" and should do what he can to place blame elsewhere. There is little, if any, chemistry from the behind the camera crew to help lift the leaden script from its doldrums.

Mein Gott in Himmel! What were these people thinking?! If a friend suggests going to see "Head Over Heels," run away as fast as you can and get yourself a new friend. The fact that it's in focus is one of the few reasons this doesn't get the absolute lowest grade.