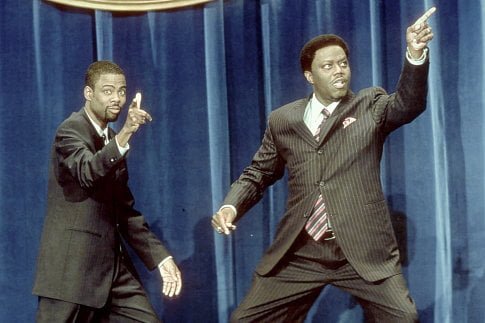 Radical minded (read: cares about the people) alderman Mays Gilliam (Chris Rock) is ousted from his job for his unconventional, apolitical ways. The untimely death of the front-running presidential contender and his running mate forces the powers that be to pick a new candidate. Since the party, headed by future prexy hopeful Senator Bill Arnot (James Rebhorn), knows that whomever they pick will lose, they pluck Mays from his obscure existence and push him into the presidential limelight in "Head of State."

Chris Rock makes his directorial debut with a script that he co-wrote with Ali LeRoi and his premier effort is, at the least, derivative. It's "Mr. Smith Goes to Washington" meets "The Candidate" with a little of "The Distinguished Gentleman" and "Rocky" thrown in and liberally stirred. The story wears its heart on its sleeve as liberal, caring, intelligent, kind and really, really nice Mays tries his best to make a difference in the hood. But, cutbacks, urban redevelopment and underhanded political hacks push him out.

Gilliam is approached by the party's (names are never mentioned but I think you can figure out which is which) campaign manager Martin Geller (Dylan Baker) and consultant Debra Lassiter (Lynn Whitfield) to run for the Big Enchilada, but he doesn't know that their goal is to make sure he loses, just not too badly. He agrees to take on the daunting task (in true Hollywood tradition, the election is just seven weeks away) and mouths the meaningless platitudes in one campaign speech after another. Of course, Mays, with his big brother Mitch's (Bernie Mac) wise help, sees that he is not speaking his true mind and he shucks the pinstriped suite and red-white-and-blue tie and dresses as himself in sweats and sneakers. He also drops the party rhetoric and becomes a candidate of the people, by the people and for the people.

On the other side of the fence is incumbent party hopeful, Vice President Brian Lewis (Nick Searcy), whose right to claim the throne of power is based on being "vice president for eight years, a war hero and Sharon Stone's cousin." His campaign slogan, repeated many times so you get the point that the man has no real platform, is "God bless America, and no one else." Gilliam's motto when he is talking to the people about social and political injustice is "That ain't right!" The lines of good and smart versus ignorant and stupid and firmly drawn in "Head of State" and you won't need to be a rocket scientist to figure out which is which.

Rock and LeRoi's script, besides dealing with the political future of the entire United States, if not the world, also deals more personal things like love, integrity, keeping your word and personal ambition. The latter is personified by Robin Givens as Kim, Mays fiancée who, when she learns he has lost his alderman job, promptly and shrilly declares him an unambitious loser and quickly and unceremoniously dumps him. Of course, when she learns that he is running for president and all is forgiven as she tries to wile her way into the possible position as First Lady. Givens should have worn a mask, rather than risk recognition, with this silly character and its unnecessary and slapstick subplot.

Rock is amusing at times but I think that, for his directing premier, he took on too many tasks with his script that tries to cover everything. There is a love interest for the presidential hopeful in the person of Lisa Clark (Tamala Jones), a hard working young lady who attracted Mays attention before these heady days and is uninterested in the glamour of his new role in America's future. Jones is pretty and works well with Rock but her disinterest in all that is going on around her feels contrived. Dylan Baker and Lynn Whitfield are wasted as the party henchmen who have a sudden change of heart toward Mays and his chances of success. This Cinderella fairy tale feels forced.

The draw for "Head of State," and almost a reason for the price of admission, for a matinee anyway, is Bernie Mac as Mays's big bro. Mitch is a Chicago bail bondsman who thrives on crime. He is street smart and the only person that Mays can trust so it's a logical Hollywood film step to have Mitch, with the election a few short weeks away, step in as his little bother's running mate. Bernie Mac steals the show with his sassy talk, tough demeanor and love for his brother. He gets the most out of his politically incorrect interviews - when he is asked about NATO, he says he never met the man - and provides a funny diversion to the plodding, liberal plot.

There is a great deal of crowd appeal in "Head of State" if the reaction of the audience at the screening I attended is any indication. Much laughter and applause was garnered with such events as Mays getting rich, middle age and white folk to spontaneously begin to line dance The Slide at a fund raiser, or to break into Ebonics speech. The film also castigates drug use, minor-aged drinking (in the form of "Crib" malt liquor - its orange and there is a nipple on the bottle) and promotes that parents use a good whack on the ass as a form of childrearing rather than leave that responsibility to the schools, which should educate and not discipline. There is a lot of sensible liberal thinking in the heart of "Head of State," but its black and white (no pun intended) simplicity make it lightweight fare at best.

A few questions, even considering the fantasy elements of "Head of State," come up: would "the party" really have to recruit an out-of-work alderman to run for president? Is Mays Gilliam even remotely old enough to run for this country's greatest office (which, by the way, requires the candidate be at least 35 years old)? I guess I'm delving too deeply into things for a lightweight comedy/fantasy. It will appeal to its target audience but, except for Bernie Mac's charm, is forgettable.