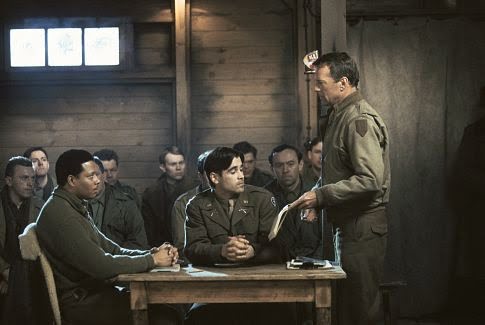 When senator's son Lieutenant Tommy Hart (Colin Farrell, "Tigerland") is plunged from his cushy desk job into a German POW camp, he unknowingly earns the American commanding officer's disregard by lying about his interrogation by the Germans. Telling him there's no more room in the officers' barracks, Colonel William McNamara (Bruce Willis) assigns Hart to an enlisted mens' barracks run by the racist, black-market-trading Bedford (Cole Hauser, "Tigerland"). The arrival of two Tuskeegee airmen, the camp's first black men, and McNamara's decision to make the officers the Lieutenant's responsibility, signals the real beginning of "Hart's War."

Adapted from John Katzenbach's novel by Billy Ray ("Volcano") and Terry George ("The Boxer") and directed by Gregory Hoblit ("Primal Fear"), "Hart's War" is an old fashioned picture that plays like a cross between "Stalag 17" and "A Soldier's Story" without attaining the quality of either. This WWII flick is a diverting enough entertainment and technically assured, but one has to wonder about a climatic act sold as heroism when the filmmakers have exposed their hero's altogether different intent.

Hart's journey to the camp is compelling. An offer of a ride and delivery of a holiday case of champagne results in a German ambush and crash that leaves Hart catapulted into a snow covered pit filled with dead soldiers. He's interrogated until he points out a fuel dump. His POW train is strafed by P-51s until the passengers bodily spell out their identities.

Initially, Tommy is welcomed into the enlisted men's barracks, with Bedford making a holiday offering of a new pair of boots, but the climate changes dramatically with the arrival of Lieutenants Lincoln Scott (Terrence Dashon Howard, "Angel Eyes") and Lamar Archer (Vicellous Reon Shannon, "The Hurricane"). When Archer's set up by a knife discovered under his mattress, he's summarily executed by SS Major Wilhem Visser (Marcel Iures, "Mission: Impossible"). Scott publicly threatens Bedford with death and shortly thereafter Bedford's murdered. McNamara requests a trial and appoints Hart as Scott's counsel. McNamara's reasons are mysterious, but Hart's surprised by assistance from Visser, a Yale alumni with a taste for American jazz and Mark Twain.

"Hart's War" is about many things - class, racism, courage and nobility among them - but it weakens any points it might have made by not providing the necessary character motivation for those that embody them. Scott gives a moving speech about the plight of black officers to an audience that clearly has it in for him, yet is pegged to make a self-sacrificing gesture for that same group. The Colonel is shamed into a courageous act. Hart himself is established early on as a coward and liar. Oddly, the only character that intrigues and gains any sympathy is the cultured SS Major.

Bruce Willis plays the Colonel with squinty eyes and a semi-permanent semi-smirk, except for a couple of scenes where he gets serious. Flavor of the month Colin Farrell continues to fail to whet my appetite while his "Tigerland" colleague Hauser spices things up as the self-motivated bigot. Howard is saddled with being saintly, although he delivers the goods with his oratory moment. Iures walks away with every scene he's in.

Hoblit's made a good looking film (cinematography by Alar Kivilo, "The Glass House") that works on the whodunit level as its larger themes get lost in the murk of its own making.