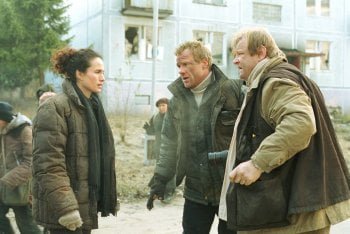 Pulitzer-prize winning photojournalist Harrison Lloyd (David Strathairn, "Limbo") tells his Newsweek boss Sam Brubeck (Alun Armstrong, "Proof of Life") that he's quitting his dangerous job because his 'luck-meter's down to 0,' Sam convinces him to take that proverbial 'one last assignment.' No one expected the Serb-Croatian conflict in Yugoslavia to become a full-fledged war and Sam's soon faced with delivering bad news to Harrison's photo-editor and wife Sarah (Andie MacDowell, "Town and Country"). Refusing to believe her husband is dead, Sarah leaves their two children in the care of her mother and goes to bring him home in "Harrison's Flowers."

"Harrison's Flowers" is one of those coulda, woulda, shoulda films that frustrates with its unrealized potential. Featuring strong performances from Andie MacDowell and Adrien Brody and scenes of genocide that overpower anything in "Welcome to Sarajevo," director/writer/producer Elie Chouraqui's ("Les Menteurs") film is undermined by low budget battle sequences, a weak love triangle conflict, one too many coincidences and a lousy title. ("Harrison's Flowers" refer to his botanical hobby partaken of in a refuge-like greenhouse. The flowers' symbolism as his family and his pursuit's nurturing nature is clumsy at best.)

We know Harrison and Sarah have a strong marriage based on the workplace teasing she endures on a morning after one of Harrison's returns from abroad. (This scene also serves as a counterpoint to the evasive, guilt-ridden, embarrassed reception she endures before hearing of Harrison's fate.) Harrison's colleagues are introduced at an awards dinner, where he'll be presenting his best friend Yeager (Elias Koteas, "Novocaine") with a Pulitzer of his own. Harrison's accosted by a scruffy, coke-sniffing Kyle (Adrien Brody, "The Affair of the Necklace") in the men's room. Kyle, bereft with the loss of a young, unheralded colleague, accuses Harrison of a cushy lifestyle while hardscrabble photographers endure greater danger for little reward.

Soon after, Harrison's declared dead but Sarah's convinced she's spotted him on a CNN tape from Vucovar and believes he called her the night before even though she could hear nothing. Within days she's driving across the Yugoslavian border with a young stranger looking for his wife. They're almost immediately caught within a conflict where tanks crush their car before soldiers blithely shoot Sarah's companion in the head and she barely escapes rape. She's found in a catatonic heap by Stevenson (Brendan Gleeson, "The General") and Cathy (Marie Trintignant) who bring her back to their base and an astonished Kyle, who recognizes her. Admiring her guts and admitting that no one witnessed Harrison's body, Kyle is the only one who agrees to press on to Vucovar, a place of horrors no press have been able to gain access to. During their journey, Kyle, Stevenson and Sarah are met by Yeager, who's always carried a torch for Sarah and has come to bring her home. When she remains steadfast, Yeager commits as well.

Chouraqui's vision of a love story put to the ultimate test is only partially successful. MacDowell, giving her best performance since "Unstrung Heroes," is convincing as a woman who'll stop at nothing to find her husband yet aside from that office teasing and a couple of sexual moments, Sarah and Harrison are presented as a fairly typical couple raising two kids. Yeager's feelings are unrecognized by Sarah and no effort is made to delve into her impact on his friendship with Harrison or his marriage. Much more intriguing is the relationship she builds with Kyle, who's clearly humbled by the strength of her love and somewhat guilty over his harassment of Harrison. Also weak is a dependency on characters always seeming to be in the right (or wrong as the case may be) place, with New Yorkers routinely stumbling upon each other in Croatia and photographers always around the corner from fresh devastation.

Where Chouraqui succeeds is in depicting the horrors of genocide, with civilians being shot in the streets and children rounded up into enclosed areas to have a grenade tossed their way. Dead soldiers heaped in piles like cordwood become almost a routine sight. Chouraqui maintains a strong level of tension throughout and MacDowell's reactions to this slaughter help bring home the atrocities. Nicola Pecorini's ("Fear and Loathing in Las Vegas") urgent camera work featuring effectively grainy closeups won Best Cinematography at the San Sebastian film festival.

Harrison Lloyd has been a top-rated photojournalist for years and has survived the ordeals of his job almost unscathed. But, he knows that his luck must run out sooner or later and he wants to give it all up for himself, his wife Sarah (Andie MacDowell) and their two kids. His boss (Alun Armstrong) convinces him to hang on "for just a little while" and ships Harrison off to the unknown of the Bosnian civil war. When word comes back that Lloyd was killed, Sarah does not believe it and heads right into the middle of the war to find her husband in "Harrison's Flowers."

When Harrison takes his latest assignment, it is with the knowledge that it will likely be his last. Soon after his arrival in the former Yugoslavia he becomes yet another victim of the war and Sarah is told of his death. She knows her husband and best friend cannot be dead because she simply doesn't feel it in her heart. She puts the kids in the care of her mother (Diane Baker in an almost nonexistent role) and lands herself in the midst of the chaotic violence where brother is against brother and "ethnic cleansing" is the word of the day.

With rental car in hand, she is about to leave the safety of the airport when a young man, a local schoolteacher, begs a ride to her destination city of Vukovar. There are dangers signs apparent but the pair press on regardless. Suddenly, they are in the midst of a battle, a tank destroys the car, the young teacher is shot in cold blood and Sarah is nearly raped by a soldier. Fate spares her and she is left, stranded, in the middle of a war. Luck is with her, though, when she meets a colleague of Harrison, Kyle (Adrien Brody), who, impressed by her resolve, agrees to help her seek the truth about her husband. They enlist the assistance of a group of photojournalists (there is safety in numbers), including Irishman Mark Stevenson (Brendan Gleeson), and, together, make the trek through what Sarah comes to realize is real war, not just a living room TV view of it.

After seeing "Harrison's Flowers" it dawned on me that the story is very similar to that depicted in the Oscar winning 1984 film, "The Killing Fields." The difference is, while the older film was based on true events, this new opus is based on fabrication. Sarah Lloyd is happily married though she misses and worries about her husband when he is away on assignment. Harrison Lloyd, a world-renowned Pulitzer Prize winning photojournalist, is at the point in his dangerous career where he knows the odds are stacking against him, but he still takes the risky assignment in Bosnia. Sarah is supportive of Harrison, almost perfunctorily, as he heads off one more time. The only problem with this idyllic family is with their son, Cesar (Scott Anton), who has become estranged from his always-on-the-go dad.

The idea that Sarah would refuse to accept her husband's death - no one saw him die and there is no corpus to prove his death - and leap into danger for her man is a terrifically noble concept, completely far-fetched but very noble. You need to suspend disbelief and let the story unfold before you and accept Sarah's efforts. If you do that, you will be treated to a solid, well-acted adventure film that wears its condemnation and acceptance of the vagaries of civil war on its sleeve. And, surprisingly to me, Andie MacDowell does a credible job of portraying the driven, loving Sarah.

The actress is better known for her perfs in less violent fare such as "sex, lives and videotape" and "Four Weddings and a Funeral," so, when presented as an action figure (sort of), I was skeptical. The actress blends Sarah's resolve and vulnerability into a character who might just lay her own life on the line and enlist the willing help of others to get what she came for - Harrison. Adrien Brody, as the brooding, dedicated photojournalist, Kyle, leads the talented cast joining MacDowell. He is an idealist who is in constant struggle with showing, in his pictures, the truth of war and his desire to put an end to the violence of the very thing that is his subject matter.

Elias Koteas, as Harrison's best friend (who is, whether he knows it or not, totally enamored of his friend's wife) is the voice of reason even if his predictions of danger go unheeded by the headstrong Sarah. Brendan Gleeson, as the on-the-edge Stevenson, is volatile and unpredictable and is the unwitting cause of a death - one that I expected but was shocked by, anyway. David Strathairn has the unenviable job, as the title subject, of being the object of Sarah's search and is given little to do. His involvement is a prologue and an epilogue to the body of the film's action and could have phoned in the perf for his limited onscreen time.

Technically "Harrison's Flowers" does a good job of showing the devastation of war and the sudden, gut-wrenching way it can snuff out a life, unexpectedly, in the blink of an eye. The hyper-realism that films like "Saving Private Ryan" and "Black Hawk Down" have depicted of the ravages of battle - you could almost hear the bullets whizzing past your ear in those films - is handled in a more traditional manner (it looks like staged explosions going off around the protagonists). Still, the shock of war is a keystone of the film and director Elie Chouraqui does a solid job of showing the abrupt horror of the Bosnian conflict.