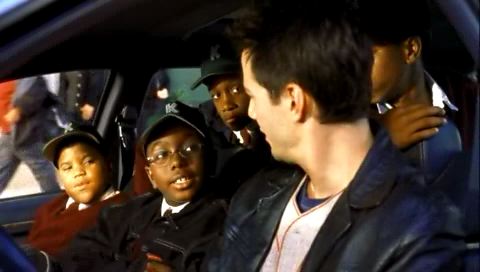 Conor O'Neill (Keanu Reeves) is a drunk up to his neck in gambling debts. When he turns to investment banker buddy Jimmy Fleming (Mike McGlone, "The Brothers McMullen") for yet another loan, Jimmy pitches him a deal - coach a Cabrini Green Little League team to fulfill Jimmy's corporate pledge and he'll pay Conor $500 a week. Conor reluctantly agrees and is surprised by his own feelings for the kids he comes to know in "Hardball."

Screenwriter John Gatins ("Summer Catch," "Ready to Rumble") Hollywoodizes Daniel Coyle's book "Hardball: A Season in the Projects" and serves up an uneven "The Bad News Bears" hybrid. Conor serves more as symbolic outside masculine interest than effective sports coach and is forced to sway wildly to the plot's mechanics, turning his concern for the kids and romantic interest in their teacher Elizabeth Wilkes (Diane Lane) off and on like a faucet.

Conor's a lowlife who exists by gambling on and scalping tickets to local sporting events with his best friend Ticky Tobin (John Hawkes, "The Perfect Storm"). He uses his deceased dad's betting account to place another bet when his own account's being called in and loses again. Now he's being hunted by two bookies, yet uses Ticky to introduce him to a third.

When he finds himself the coach of the Kekambas, eight ten year olds and an underage mascot G-Baby (DeWayne Warren), Conor needs to make a deal with Miss Wilkes and a suspicious mom to help Kofi Evans (Michael Perkins) deliver a book report in order to have enough kids to play. Then Conor finds out his responsibilities also include getting his kids home safely after he callously sends asthmatic Jefferson (Julian Griffith) home after dark and the poor kid winds up in the hospital, beaten up by the ever present drug dealers and gang members outside his home. Although Conor lives in a rundown, inner city apartment, his eyes are opened to the violence of daily life in Chicago's projects. He begins to take a real interest in the kids whose sole joy is found on the baseball field.

Ironically, the Keanu Reeves who's accused of only being able to deliver 'whoas' and 'dudes' is more believable in roles such as the investment banker he (unbelievably) tries to pass himself off as here than the lowlife he's cast as. Reeves has charm to spare with the kids and Lane but fails to convince in his drinking, gambling scenes. The guy just exudes too much inner peace to ever seem truly desperate. Diane Lane is solid as the inner city teacher who takes an interest in the unlikely guy who's fired up her students.

The kids, all but two making their film debuts, are all naturals, with young DeWayne Warren a standout as the crowd pleasing G-Baby. Also good is A. Delon Ellis, Jr. as the silent star pitcher who needs the rhythm of The Notorious B.I.G.'s 'Big Poppa' rap on his walkman in order to win. D.B. Sweeney wears the false bravado and shifty eyes of a competing coach in the game for himself rather than his team.

"Hardball" is directed by Brian Robbins ("Varsity Blues") in a straightforward manner, although he yanks his lead too abruptly through emotional shifts (Conor's boorish behavior towards Elizabeth on their first date and later abandonment of his team just don't wash as handled here). The PG-13 rated film has been criticized for the bad language spouting from the mouths of its kids, but it would seem unnatural for these kids to speak otherwise.

Admirably, "Hardball" avoids schmarm and offers numerous crowd-pleasing moments, but it only delivers a base hit instead of hitting one out of the park.

Conor O'Neill (Keanu Reeves) is a gambling addict in way over his head to the local bookies, owing them thousands. His best friend from childhood, Jimmy Fleming (Mike McGlone), has bailed his buddy out of such fixes many times before, but this time is just too much. Instead of just giving Conor the cash, Jimmy makes a deal - $500 a week for 10 weeks. The only catch is, O'Neill has to coach an inner city Little League baseball team in "Hardball."

The screenplay, by John Gatins, is based on the book by Daniel Coyle, an account of the author's own experience as a youth baseball coach in Chicago's notorious Cabrini-Green project. Director Brian Robbins brings the story back to the Windy City as it follows loser Conor hitting the bottom of his own personal barrel. He owes not just one, but two bookies big time, and his immediate future has visions of broken bones. Desperate, Conor tries to hit up Jimmy, a hot shot at a big time investment firm, only to sell his soul for $5000 and the agreement to coach the Kekambas, the ball team that Fleming's company sponsors. And, Conor will only get paid after each week of coaching the team.

The reluctant Conor meets the team for the first time and they are a mixed collection of kids, all shapes, sizes and ages and all with a desire to play ball. Little G-baby (DeWayne Warren), the smallest of the lot, is both team mascot and most dedicated player, despite his diminutive size. Miles (A. Delon Ellis, Jr.) is the team's star pitcher, but only if he can jive to "Big Poppa" on his headphones when on the mound. Jefferson (Julian Griffith) is a 'big-boned' boy with an asthma condition. Kofi (Michael Perkins) is possibly the Kekambas's best player. Andre (Bryan Hearne) is tough kid who needs the anchor of his team far more than he realizes, with Jamal (Michael B. Jordan) his best friend. Ray Ray (Brian Reed), Alex (Alexander Telles), Sterling (Sterling Elijah Brim) and Clarence (Christopher Loften) make up the rest of the team. I mention each of the kids by name for a reason. It is one of the best casting of a large bunch of young actors and they, uniformly, act the part of members of a team. My favorite is the charismatic little kid playing G-baby.

This is a movie, in concept, like many inspirational sports team flicks we've seen - "The Bad News Bears," "The Mighty Ducks," "Mystery, Alaska" and a myriad of others come to mind, of course. The difference lay in a subtle undercurrent of social commentary that "Hardball" conveys. Sure it's a rags to riches team tale as the Kekambas start out as a motley collection of kids and, over the weeks working with Conor and each other, become a worthy adversary for the opposition. There are also things said about the matriarchal nature of inner city life, where the father figure does not come to play in the equation of raising a child. Unfortunately, this aspect of the film is underplayed for the sake of the inspirational team story.

The screenplay tries to cover too much ground in its moderate run time. Besides the main yarn about the boys, there is also the fall and rise of gambler Conor, a budding romance between him and the kids' dedicate school teacher, Elizabeth Wilkes (Diane Lane), the aforementioned social commentary, ghetto violence, personal tragedy, triumph and redemption. To the makers' credit, the sentimentality does not get schmarmy, especially after the film's dramatic, sudden climax. Things never really get beneath the surface, either, as Robbins touches upon each social and personal subject but not giving time to explore each or, even, some fully.

Keanu Reeves as a low life gambling, and possibly booze, addict who has hit rock bottom doesn't quite cut it. He lacks the edge that someone out of control and desperate at their plight would have, but is likable as Conor, anyway. Diane Lane is under-utilized as the dedicated teacher and potential love interest, with both parts given short shrift in the story. John Hawkes is credible as O'Neill's sidekick Ticky Tobin. Mike McGlone made an affable debut in Edward Burn's "The Brothers McMullen" but is given virtually nothing to do here. D.B. Sweeney is the obligatory tight ass manager of the other top team, the Bua Was. Home run hitter Sammy Sosa makes an appearance as himself

"Hardball" isn't all it could be but its heart is definitely in the right place. There is a good, inspirational sports movie buried in here that provides good role models and a degree of thoughtfulness for kids. Be aware that there is graphic language and gang violence.