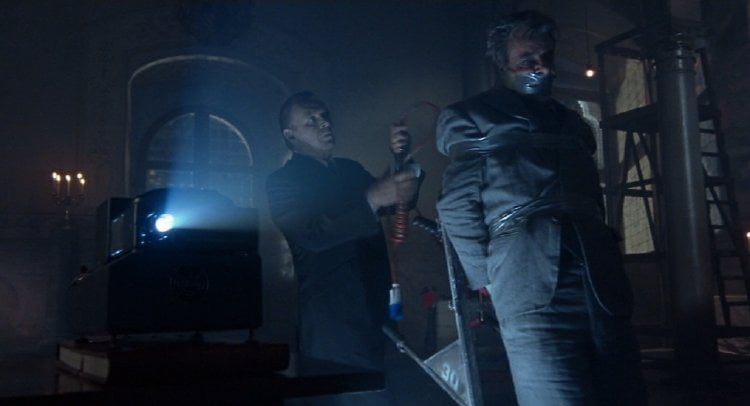 Ten years ago, director Jonathan Demme gave us a serial killer movie that was a masterpiece of its genre in "The Silence of the Lambs." Taking over the reins, director Ridley Scott ("Gladiator") brings Thomas Harris' third novel to feature Hannibal Lecter to the screen. Julianne Moore ("The End of the Affair") takes over the role of Clarice Starling, Gary Oldman joins the cast as the series' ever-present, yet changing, second villain Mason Verger, and Oscar winner Anthony Hopkins returns as the titular "Hannibal."

In the thirty odd minutes of screen time it takes for Hannibal to make an appearance, we discover that prison orderly Barney (Frankie R. Faijon, "The Silence of the Lambs") has been making a buck or two selling Hannibal Lecter items to a lucrative underground market. The unfathomably wealthy (home is the Biltmore Estate, which served as Melvyn Douglas and Shirley Maclaine's mansion in "Being There") and hideously disfigured Verger is a client of Barney's, being the only surviving victim of Lecter's. Verger is obsessed with exacting revenge and is offering a private, three million dollar reward for Lecter.

Meanwhile, Clarice Starling has become the whipping girl of the FBI after her high profile drug ring bust results in five deaths, raining bad publicity upon the Bureau. Starling's woes have practically been engineered by Justice Department official Paul Krendler (Ray Liotta, "Goodfellas"), a corrupt man in cahoots with Verger who puts Starling back on the Lecter case to lure him out of the shadows.

Across the Atlantic, Inspector Rinaldo Pazzi (Giancarlo Giannini, "Swept Away") meets Dr. Fell, a new library curator, while investigating the disappearance of his predecessor. Clarice's work in DC causes a request to go through Pazzi's offices and he comes to realize the charming Fell is the notorious Lecter. Rather than cooperate with the FBI in his official capacity, Pazzi, the husband of a much younger, beautiful wife, makes a fatal mistake by attempting to reap the monetary reward.

Screenwriters David Mamet ("State and Main") and Steven Zaillian ("Schindler's List") have pretty faithfully adapted the Thomas Harris novel for the screen. Yes, the notorious ending of the novel has been modified somewhat, but the spirit is essentially the same and Starling's actions are better justified. Unlike the first film, this Hannibal is presented as a thinner of the herd, a killer of the rude and greedy.

Hopkins, an actor who can serve up ham (see Coppola's "Dracula"), is once again note perfect as Dr. Lecter. The performance accounts for ten years of laying low while enjoying life's beauty and pleasures. There's humor in this performance (listen to his delivery of 'Okee dokey') as well as menace (watch him approach Inspector Pazzi, barefoot).

Moore is in a difficult spot reprising Foster's role. "Silence" was about Clarice and "Hannibal" is not. Moore is OK, playing career disillusionment by seeming tired and washed out, although she does show spark with the backbone she presents to male colleagues looking to mow her down.

The uncredited Oldman is unrecognizable beneath the work of a special effects makeup team which presents him with a reconstructed face resembling a Leatherface mask from "The Texas Chainsaw Massacre." Oldman does his job well, making Verger a more despicable character than Lecter, yet his diction is too clear for a man with no lips.

The best support comes from Italian mainstay Giannini, who gains sympathy for his actions and fear for his character as he treads too close, too often to a danger he does not comprehend. Liotta does his best work when he gets brainy.

The production is first rate across the board, if not at the masterpiece level of "Silence." Where that film used Hannibal's cells as descents into hell, this film uses motifs of pigeons, boars, and yes, even a lamb. Location work in Florence is notable, including an original outdoor opera of Dante's death.

As a sequel, "Hannibal" may not be up to "The Godfather: Part II" level, but director Ridley Scott and lead Hopkins have presented us with a buffet worth lingering over.