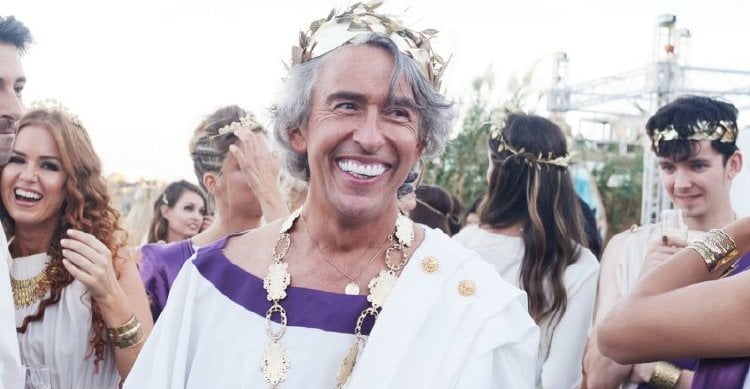 Sir Richard McCreadie (Steve Coogan) is a self-made billionaire – well, self-made from the sweat and toil of thousands – and is in the throes of planning an uber-extravagant 60th birthday party. For himself. No expense is spared, unless he can make a better deal in “Greed.”

When he was a young man, Richard McCreadie (Jamie Blackley, "Irrational Man") bucked his mother Margaret’s (Shirley Henderson) determination to fulfill her late husband’s wish that he receive a posh education, instead turning his expulsion for gambling in boarding school into an opportunity to make money in the discount fashion industry. By driving outrageous bargains and exploiting cheap Sri Lankan labor, Sir Richard McCreadie (Steve Coogan) becomes a billionaire, but when his tax dodging ways catch up to him, he decides an elaborate Mykonos 60th birthday bash is the best way to goose his image in “Greed.”

Using British fashion retail bottom feeder Sir Philip Green as his template, cowriter (with Sean Gray, HBO's 'Veep')/director Michael Winterbottom ("The Trip" series) has knocked off a broad inequality satire that delivers its message with a bullhorn. While “Greed” is certainly not subtle, every Trump supporter should watch this movie and ask themselves if this is the worldview he or she ascribes to because it certainly damn well is his. Winterbottom encouraged improvisation and Coogan, who has shown a scary affinity for portraying obnoxious gits (albeit highly entertaining ones), summons Trump and his ilk with his lack of empathy for Syrian refuges and his win at any cost ethos backed up by subplots featuring a string of bad faith bankruptcies, a bread and circuses agenda and the hired biographer, Nick (David Mitchell), who stands in for the audience. It is fitting that 45’s daughter was in business in the very industry featured here, her own business guilty of exploiting cheap foreign labor.

We are introduced to McCready arriving on the Greek isle where cheap Bulgarian labor is building a plywood ampitheater for his Roman themed party while a distressed lion tamer decries his charge’s treatment. McCready immediately complains about the Syrian refugees camping on the beach, stating his guests will be upset having their view ruined, the camp itself recalling the infamous Frye Festival. Soon those refugees will literally become unpaid slave labor after McCready himself cons them with a card trick, cajoled by McCreadie's assistant Amanda (Dinita Gohil) whose own mother died in a Sri Lankan sweatshop fire.

There is much fun to be had watching Coogan and Isla Fisher, playing his unabashedly shallow and fabulously well-matched ex-wife Samantha, debating the economics of hiring celebrity entertainment (Elton costs $1 million and Diana Ross has the nerve to bring a family entourage to induldge in a vacation but Tom Jones is a bargain at $350K while James Blunt, with only one hit under his belt, provides a ‘cheap’ private serenade for only $75K). McCreadie’s daughter Lily (Sophie Cookson) takes advantage of the goings on with a scripted reality romance with Fabian (Ollie Locke) she goes all Method on while his neglected son Finn (Asa Butterfield) lusts after his supermodel girlfriend (Shanina Shaik). Mother (the amazing Henderson impersonating a crone with an affected accent denying the character’s Irish roots), an ally since burning down Rich’s headmaster, provides acidic commentary.

Flashbacks (set to an 80’s soundtrack featuring The Clash and Gary Numan) show the man’s rise, driving sweatshop owners to the very edge of profitability and causing near riots by forcibly undercutting cab driver’s fares by 80%. A recent court appearance ticks off decades of gutting businesses with bad decisions, then leaving creditors in the lurch via bankruptcy, all while evading hundreds of thousands in tax.

The man sporting ridiculously fluorescent teeth and a toga pays Stephen Frye (himself) to emcee a party featuring a Pixie Lott performance filled out with shoddy celebrity impersonators while the real deal (good sports Colin Firth and Keira Knightley) send congratulatory ‘regrets’ via video. Winterbottom’s Eat the Rich comedy surprises with an outlandish comeuppance as excessive as the events which precipated it. Call it “The Trip to the Roman Empire: The Global Road to Ruin.”

Michael Winterbottom brings us a breezy satire on the rich, the famous and the beautiful that centers on Sir Richard and his balls-to-the-wall plans for his birthday bash. Along the course of the film, there are many flashbacks to various times in the discount clothing mogul’s life, showing how he made his money – from screwing anyone and everyone to get himself the best deal. And, he does not care who suffers because of his blind ambition and, yes, greed.

The subject of the disgustingly rich and their use and abuse of their fiscal and social power has reared its ugly head for decades or more. The public’s fascination for Hollywood stars (fostered by the movie moguls to make more money) in the 1920s and 30s; the peoples’ overwhelming need to watch the hit TV series during the 80s, “Lifestyles of the Rich and Famous” with Robin Leach, to see what they do not have and never will; and, more recently, “All the Money in the World” about John Paul Getty and his vast wealth and his kidnapped grandson, and HBO’s “Succession” about a fictional Rupert Murdock-like billionaire and his family.

The previous eras were about the hopes and dreams of the masses to share in the wealth and glamour they wish they could have. It was kind of a hopeless hope that one can be rich and famous. The latest tales of the .1 Percenters looks more on the absolute power they have in their circles and their ability to indiscriminately bully those who are weak and vulnerable – just because they can.

Winterbottom does spend a decent amount of time on the issues of labor exploitation in third world countries and the horror of Asian (and other regions) sweatshops where workers toil for twelve hours a day in horrendous conditions for a pittance. All so we in the west can pay big bucks for “designer” wear made from the blood, years and sweat of others. But, mainly, the filmmakers are making a statement against the exploitation of the poor by the rich.

The depiction, in “Greed,” of the opulent lifestyle and the uncaring excesses of the very, very wealthy is being played as a satire but, in the pit of my stomach, I do not think it is funny. Instead, it is just something that should be maligned for what it is – unmitigated greed.

Winterbottom assembles a collection of actors, both known and not-so-well known, to give the film its comedic flare, like Coogan, Isla Fisher, Stephen Fry and Shirley Henderson. But, the comedy is darkened by the thought that there exists a small segment of society that holds the rest of us, the 99 percent, in contempt and worse.