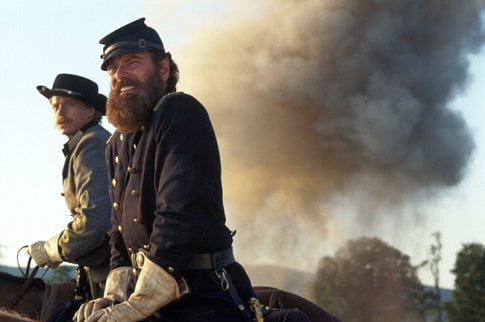 In 1993, Ted Turner turned the late Michael Shaara's Civil War novel The Killer Angels into a battlefield film epic about the turning point of that historic conflict with "Gettysburg." The same production team has tackled son Jeff Shaara's prequel about the first years of the war that lead to the monumental confrontation with "Gods and Generals."

Abraham Lincoln offered Colonel Robert E. Lee (Robert Duvall) command of the Federal Army, called to arms to put down the rebellious secessionists, but Lee chose instead to take the offer of his home state of Virginia and stand against the Union. Each side was fiercely righteous and so the Civil War, like all wars before and since, became a war of "Gods and Generals."

The film gets off to a bad beginning as Lee arrives to reject the president's commission. Unconvincing matte work, solemnly delivered dialogue and an unmoving camera give the scene all the drama of a historical school play.  Things continue on in this vein for an hour as sides are drawn with crowds of extras (most of whom are Civil War recreationists as used in "Gettysburg") failing to act naturally for the camera. Maxwell stages one scene, where two
Virginian volunteers discuss their low morale, with the two speakers shown amidst a long phalanx of silent marchers. He may as well have spotlit them.

Jackson was an earnestly devout man, but his call for wife Anna (Kali Rocha, "White Oleander") to join him in a reading of Corinithians to mark his departure is risible, partly due to Rocha's heaving bosom. Much better played is its counterpart, where Maine college professor Lawrence Chamberlain (Jeff Daniels, "Gettysburg") makes his decision to volunteer known to wife Fanny (Mira Sorvino, "The Grey Zone"). Daniels' introduction lifts the film up a notch. He's an injection of "Gettysburg's" glory.

However, "Gods and Generals," which covers the Virginia battles leading up to Gettysburg, is mostly about Jackson. The film makes a strong case that Jackson's untimely death (from pneumonia while recovering from friendly fire which cost him his left arm) may have changed the Civil War's outcome.  Fredericksburg falls, but Lee's clever strategy is showcased when the Yanks fail miserably at their attempt to take Richmond. Jackson, whose faith made him believe that he 'was as safe in war as in bed,' was Lee's right hand man.

"Gods and Generals," which covers three years vs. "Gettysburg's" three days, offers far fewer fighting sequences than "Gettysburg," and when it does it doesn't articulate the battle plan cinematically. Maxwell throws characters spouting their lines, frequently in the form of poetry or prayer, at other characters while editor Corky Ehlers ("Gettysburg") ploddingly cuts from close-up to two-shot to close-up. Two black characters exist solely to make speeches about slavery. Martha (Donzaleigh Abernathy, TV's "Miss Evers' Boys") is a Fredericksburg slave who calls her family 'good people' but prays for the wounded Unionists who commission their home as a hospital. Jim (Frankie Faizon, "Red Dragon") is a free man who becomes a cook for Jackson's regiment. They both pray for the freedom of Negroes one evening.  While no Black characters are present on the Yank side, Chamberlain answers his brother Tom's (C. Thomas Howell, "Gettysburg") comment that some men resent fighting for darkies by stating that they should all be willing to die for the Negroes' freedom. The human side of all these people gets
obscured by earnest sloganeering.

Lang makes Stonewall Jackson spring to life, but is hampered by the script's agenda. A third act relationship with a five year old girl (Lydia Jordan), intended to signify Jackson's separation from his newborn daughter, comes across like a Shirley Temple/Bill Bojangles Robinson act. Daniels is good but underutilized. Brian Mallon, another "Gettysburg" returnee, adds spirit whenever Hancock is in a scene. Kevin Conway, though, reissues his Lucky Charms blarney as Buster Kilrain. Sorvino's brief apearances offer relief in a higher calibre of acting than is present throughout most of the film. Ted Turner dons his Civil War duds for the requisite cameo once more.

Technically, the film is third rate. Cinematographer Kees Van Oostrum ("Gettysburg") does little more than point and crank his camera. Effects work and stunts are unconvincing, from cheesy matte work to breakaways that break too soon and bodies which fly from explosions too late. Titles are used so often one awaits one that reads 'Are you still awake?'  Original Music by Bob Dylan, Randy Edelman ("Shanghai Knights") and John Frizzell ("Ghost Ship") is alternately inappropriate or cliched.

"Gods and Generals" should have been a rich opportunity to explore the bonds of religious belief and war with a backdrop of the most troubled time in U.S. history in what may be an era to replace it. Instead, it is merely a good portrait of Stonewall Jackson, surrounded by a bad movie.

I thought that the elder Shaara's fabulous work was one of the best combinations of historical accuracy and literary license that I ever read. I was thrilled when Turner, with director/screenwriter Ronald F. Maxwell, brought the ambitious novel to the big screen and did so with the energy and majesty that the incredible event required and deserved. This same team, headed by Maxwell once again, adapts Shaara the younger's continuation of his father's historical fictionalization of America's greatest challenge to its democratic way of life. Unfortunately, Turner and company dropped the ball with "Gods and Generals."

Granted, the wealth of documentation and information available for the creating of "Gettysburg" allowed for the fixings to accurately, with the proper scope, show the strategies, tactics, bravery, stupidity, luck and utter horror of that most famous battle in American history. "Gods and General" covers much more ground and Jeff Shaara's book effectively tells of the years of fighting leading to those three July days in that small Pennsylvania town of 1863. I have been anticipating, for some years, the film about the momentous battles that led General Robert E. Lee to bring the War of the Confederacy right into the heart of the Yankee north. The fact that the original team was involved encouraged me all the more.

"Gods and Generals," most unfortunately, does not even come close to the quality, composition, characterizations and sheer scope of battle of the earlier film. Maxwell and company recreates such historic events as the first Battle of Bull Run (the first Battle of Manassas to those south of the Mason-Dixon line) and the battles of Fredericksburg and Chancellorsville. But these epic and brutal events are handled in an isolated manner with the bulk of the story, mainly, about the rise to fame and glory of General Thomas "Stonewall" Jackson (Stephen Lang), the roots of the heroism of Colonel Lawrence Chamberlain (Jeff Daniels) and, to a woefully small degree, the strategies, struggles and pain of Robert E. Lee (Robert Duval).

A major difference between the two Civil War works is the handling, by Maxwell, of these dialogue-laden scenes accompanying the dramatic battles of "Gods and Generals." In the earlier film the speeches are used to advance the story, explain the strategies and establish the relationships between the players. There are some noble monologues from the various characters that explain why each side is fighting in the war that is ripping the United States in two. The speeches are heartfelt and well delivered and, at times, touching and emotional. These same kind of speeches are not handled well in "Gods and Generals" with the extended two-player scenes - General Thomas (Stonewall) Jackson (Stephen Lang) reciting poetry or the bible to his wife (Kali Rocha), several time, is the principle two shot used far too often - that expostulate on the righteousness of the cause. The speechifying scenes are generally wooden and boring, not inspirational, and succeed in only bogging things down. This is a very bad thing for a film nearly four hours long.

Another important flaw with "Gods and Generals" lay in the lack of significant characters both in the foreground and in the back. "Gettysburg" spawned many good performances from many talented character actors. Even smaller key performances, like Richard Jordan's last role as the conflicted southern General Lewis Armistead, are fully developed and real people, not just historical figureheads. The new film does not capably dwell below the characters of southerner Jackson and northerner Chamberlain, in a reprise of that character from the first film. Lang commands the film as the stalwart, religious family man and brilliant strategist that General Lee considered his right hand. The actor gives ole Stonewall the bright-eyed fervor of a man who believes the cause he fights for is the will of God. Unfortunately, none of the actors around him come close to the spark Lang's intensity.

Jeff Daniels is used far too little in his almost-cameo role as the civilian educator who volunteered his services to his state and country to lead his men the best way he can. It's too bad that Chamberlain's story isn't mined as well as Jackson's. Robert Duvall is cast, this time around, as Robert E. Lee (Martin Sheen played the military genius in "Gettysburg"), and actually resembles Lee. He is not given the opportunity to give life to the man and appears in just a few short scenes. While the first film had many strong perfs - Tom Berenger as James Longstreet, Sam Elliot as General Burford, Jordan's Armistead, Stephen Lang as flamboyant General George Pickett, Kevin Conway, C. Thomas Howell and a myriad of other character actors fleshing things out - "Gods and Generals" is cast with mostly little known or unknown actors who are given little to do except appear in costume and mouth their stilted dialogue.

It amazes me that the production team - helmer/writer Ronald Maxwell, cinematographer Kees Van Oostrum, editor Corky Eehlers, composer Randy Edelman and others - that produced the fine "Gettysburg" are the same ones involved with "Gods and Generals." It feels like the new film was made before the original and cheaps out with shoddy special effects for the battle scenes - CGI explosions are obvious and abound and contribute to the film's artificiality. The Civil War re-enactors give these battles the enormous scope of the monumental slaughter but they cannot save the movie from itself.

"Gods and Generals" is a shallow effort that fails to capture the strategies that Lee, and their masterly execution by Jackson, used to almost succeed in dividing America forever. There is a feel of political correctness as Maxwell hits you in the face with the slavery issue that was made moot by Lincoln's Emancipation Proclamation, banning the owning of another human being in all of the United States. After that, the war that went on for years more was one of states rights, the main issue that sparked the War Between the States in the first place.

I had high hopes for "Gods and Generals." I was disappointed in a major way.