Gigantic: A Tale of Two Johns 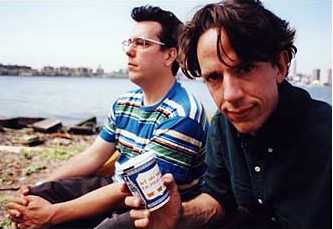 Born showman John Flansburgh met his shy, quiet underclassman John Linnell while the two attended Junior High School in Lincoln, Massachusetts in the 1970s and the two have been together ever since. They formed the truly alternative, quirky band They Might Be Giants in early 80's Brooklyn and by 1989 had scored an appearance on The Tonight Show performing their first top ten hit, "Birdhouse In Your Soul," with the Doc Severenson orchestra. Director A.J. Schnack takes us into their world in innovative ways in "Gigantic (A Tale of Two Johns)."

They Might Be Giants were always a part of my musical landscape, but I never knew too much about them nor went so far as to see a performance or purchase a CD. While this documentary skirts personal details, such as whether the Johns have romantic relationships and how their significant others view their symbiosis, it has the desirable effect of blossoming a new found respect for the pop duo. Hard core fans should simply be ecstatic.

The husband and wife team of director A.J. Schnack and producer Shirley Moyers both follow the standard documentary format and deviate from it. We know we're in for something different when the filmmakers segue to Lincoln, Massachusetts' Chairman of the Board of Selectman declaring the documentary begun from a discourse by Illinois Senator Paul Simon on his state's famous president of the same name. Talking head commentaries from the band's former record promoter, manager, fellow musicians and fans are kept visually interesting by each speaker's signature sepia photo of TMBG over his or her shoulder. Their subjects are illustrated by cutting to TMBG live performance footage, videos, and dramatic lyric readings by Janeanne Garofalo, Andy Richter and former Spinal Tap members!

The band's musical growth is documented with archival footage, animation and an insider look at the band promoting their most recent album, "Mink Car." Recollections of their inspired Dial-A-Song, run from Flansburgh's home answering machine, are hilarious, while a story of fans picketing the show where they first performed with a full band has the significance of Dylan switching to electric guitar. A People Magazine writer's comment that in 1985 he was still able to write about what excited him speaks volumes about how the industry has changed from the days an independent act could get rotation on MTV. "Gigantic" recalls "The Compleat Beatles" in its ability to show a band's evolution artistically and historically.

Flansburgh and Linnell self-deprecatingly reflect upon each other's talents. They seem to truly admire each other and obviously bring out each other's strengths. Comparisons to Lennon and McCartney are inevitable and their many admirers provide them. This feel-good lovefest may seem to almost flirt with being self-congratulatory, yet there's not a whiff of insincerity about it.

I'm not a fan of modern rock music, whether it be hip hop, rap, punk, art rock or pop. To my old mind, there hasn't been any pure, original rock since the mid-70's with the likes of the Eagle's "Hotel California" and Gerry Rafferty's "City to City." (Please note when you read this review I am not saying anything negative about today's contempo tunes, I'm just saying there is little of it I genuinely like. Hey, I'm a grumpy old guy.) So, I can't say that I was thrilled with the idea of seeing a documentary about the band, They Might Be Giants.

Then I saw the documentary.

Even to a curmudgeon like me, the freshman effort by AJ Schnack, "Gigantic: The Tale of Two Johns," is a well thought out, intelligently constructed insight into the near 20 year history of the principle members of TMBG, John Flansburgh and John Linnell. I vaguely remember their name popping up for club gigs in Boston way back when I even listened to rock stations. Then, I sat down and watched these guys and was stunned to find out just how prolific and talented they are. Not only did they have top ten songs like "Istanbul (Not Constantinople)" and "Birdhouse In Your Soul", they have a Grammy for the theme to the hit TV comedy "Malcolm In the Middle." They also created the theme and incidental music for "Austin Powers: The Spy Who Shagged Me," "The Daily Show with Jon Stewart" and ABC News' "Nightline Primetime's Brave New World." These guys are talented.

Schnack and his documentary team conducted over 50 interviews with, for those in the know, Frank Black (former lead singer of the Pixies), Dave Eggers (author, "A Heartbreaking Work of Staggering Genius"), Joe Franklin (NYC talk show host), Ira Glass (host of public radio's "This American life") and many, many more talking heads. Moving and poignant is the neat bridging mechanism and segue into the actual songs - personalities Harry Shearer, Janeane Garofalo, Michael McKean and Andy Richter give nice readings of TMBG's smart, witty and emotional lyrics.

The shear magnitude of the exposure (unknown to an ostrich like me) that Linnell and Flansburgh had for two decades is pretty remarkable unto itself. These two talented musical artists broke all kinds of ground, making their national TV debut on Late Night with David Letterman, and appearing on The Tonight Show with Jay Leno, Late Night with Conan O'Brien, The Larry Sanders Show, The Late Late Show with Craig Kilbourne and, in one of TV's great performances, a gig on The Tonight Show with Johnny Carson. The duo performs with the legendary Doc Severnson and the superb NBC Tonight Show band in a terrific, kickass rendition of "Birdhouse in Your Soul."

"Gigantic: The Tale of Two Johns" is the kind of documentary about two talented, inventive musicians that makes me understand why they would have a dedicated following. I may not like modern rock music, but I like these guys and their docu, too.