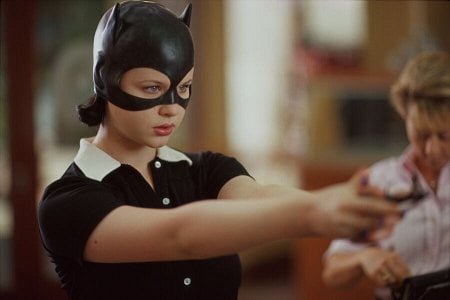 Enid (Thora Birch, "American Beauty") and Rebecca (Scarlett Johansson, "The Horse Whisperer") are best friends and determined outsiders graduating from High School. While Rebecca's set on getting a job and finding an apartment that she and Enid can share, Enid's having trouble finding a direction and becomes fascinated by an older, nerdy record collector, Seymour (Steve Buscemi). Daniel Clowes and director Terry Zwigoff ("Crumb") adapt Clowe's graphic novel, "Ghost World."

In the film adaptation, Enid's clearly the more caustic, artistic one ('That's really gonna happen,' she states to an over eager classmate who suggest they get together during the summer), while quieter Becky is more focused. Ironically, Enid must make up art class during summer school in order to complete her diploma, where she drolly endures the antics of clueless teacher Roberta (Illeana Douglas, "Stir of Echoes"). She barely puts up with her meek, single dad (Bob Balaban, "Best in Show") and is horrified when he begins to see old flame Maxine (an almost mummified looking Teri Garr), whom she really loathes.

For entertainment, Enid and Rebecca lure a lonely-hearts loser out on a bogus date. When they run into the man again at a yard sale, Enid, to Becky's complete mystification, is intrigued and begins an odd relationship with Seymour. At this point Becky pretty much falls out of the picture.

What makes "Ghost World" worthwhile are the terrific performances from Thora Birch as the ultimate counter culture wiseass and Steve Buscemi, who finds exactly the right note for a difficult character. Seymour's pathetic, but acknowledges it (he refers to himself as a cranky eccentric specimen). Enid's fascinated because Seymour knows who he is and has housed himself in his own weird world of old 78s and vintage artifacts. Birch, sporting an overripe body and cats eye glasses, puts up a hip front to hide the fear of growing up and eventually drags Seymour into her confused state of being.

Clowes and Zwigoff throw in plenty of amusing sidelines, too. Enid and Rebecca share a crush on Josh (Brad Renfro, "Apt Pupil") and constantly torture him at the convenience store where he works and where the Greek owner is in a constant battle with a hilarious mullet-head. Enid's art teacher Roberta is hilariously out of touch, preferring a jumble of coat hangers with a pandering description to Enid's own Crumb-like artwork. Enid's stab at a job selling concessions at a movie theater is an amusing example of knowing self defeatism.

But Zwigoff allows the central story to drift away, arriving at an unsatisfying conclusion for both Enid and Seymour. Becky steps over the line into grownup land by becoming concerned with material household goods, her rebellious move of skipping college landing her in a job at a coffee shop.

"Ghost World's" ectoplasmic protagonists are haunting, but it's ethereal conclusions leave us wanting.

Enid (Thora Birch) and Rebecca (Scarlet Johansson) are two malcontented teenage girls on the brink of graduation from high school and the very threshold of adulthood. Outsiders to their parents and peers, the girls carry on an almost non-stop caustic commentary that spares no one. When Enid points her poisoned wit in the direction of a hapless, alienated grouch, Seymour (Steve Buscemi), she realizes the he is much like her and an unusual friendship develops in "Ghost World."

Director Terry Zwigoff hit the big-time with his much-awarded 1995 documentary, "Crumb," about the life and family of cartoonist Robert Crumb (of "Keep On Truckin'" fame). Zwigoff, a close friend to the artist, created an evocative, sympathetic look into a truly bizarre genius. With "Ghost World," he joins with Daniel Clowes as they adapt the graphic novelist's comic book creation for the big screen. The story begins with Enid and Rebecca as a pair of intellectual sophisticates who know they are too cool and smart for words. Their outsider status gives them the right, they think, to whatever they damn well please for their own amusement.

One day, while going through the personals, Enid stumbles upon a plaintive ad by a lonely guy looking for a woman in a yellow dress that he, literally, bumped into at the airport weeks before. The girls decide to have some fun and call the guy, pretending to be "the woman," and leave a message setting up a meet. As they watch, from a distance, the poor schmuck sit and wait - for nothing - at a local diner, Enid has the first stirrings that, maybe, this wasn't such a funny idea. She begins a personal campaign to get to know the man, Seymour, who, oddly, holds much in common with the troubled teen.

Meanwhile, Rebecca has graduated high school (Enid has to go to summer school to finish her art class), secured a job and is saving for an apartment that she and Enid have always talked of sharing. Becky is sorting out her plans for the future while her friend rejects, outright, any notion of conventionality. The two begin a parting of the ways as Enid grows closer to Seymour, especially when her sad sack father (Bob Balaban) makes noises about getting back together with his ex-wife, Maxine (Teri Garr), whom the teenager can't stand. Enid makes it her goal to help Seymour find the lady in the yellow dress, but this decision, and the separation from Rebecca, leaves her to confront her coming of age alone.

Zwigoff performs the leap from documentary to feature films in a seamless manner that makes "Ghost World" not seem like a freshman fiction flick. There is some initial comparison to another teen angst film, "Heathers" (1989), but where the older film, especially the violence, was fantasy based, the comic book-inspired tale is firmly rooted in teen reality. Enid and Becky aren't out to kill the popular people here, but are not beyond using a sharp tongue to cut down "normal" people. The girls are not unique in their views. Even I remember, as a teenager, knowing 10 times more than any adult, holding the older folk in a benign, superior contempt. Enid, especially, puts forth this teen philosophy when you don't quite fit in - when in doubt, attack.

Thora Birch and Scarlett Johansson are co-billed in "Ghost World," but the veteran Birch takes over early on and is the real star of the film. The young actress has over a decade of experience under her belt, starting, at age six in "The Purple People Eater" and made the leap to more adult roles with her work in the Oscar-winning "American Beauty." As Enid, she's a little over-weight and cloaks herself in Gothic-inspired costumes that ensure that she hides her inherent prettiness. As she singles out Seymour for her own brand of amusement, she begins to make the first, unconscious, moves to maturity. Birch is solid in the role and puts a firm imprint on the complexity and sometimes confusion that make up Enid.

In a brilliant bit of casting, Steve Buscemi is nothing less than terrific as Seymour. The actor has a talent for playing the hapless misfit and can be counted on to put a unique spin on each character. Seymour may be a loser but, with his love for old jazz music and dedication to his old 78-rpm record collection, he has something that he believes in. Enid sees that his geek world may not be much to look at, but it is his own. The relationship and physical attraction that bond Enid and Seymour is frank, believable and, sometimes, touching. Buscemi should get attention at year's end for this gem of a performance.

Scarlett Johansson ("The Horse Whispered") starts off strong but, as Rebecca starts to find herself, she sets what are, to Enid, conventional goals and aspirations. As Becky gets "normal" she grows more and more distant from her friend, eventually fading from the picture, both in screen time and with her character's importance to the story. Johansson does a solid job in the diminished role. The veteran actors that help to flesh out the background are an odd, not always successful, mix. Illeana Douglas gives a dead on perf as Enid's summer school art teacher, Roberta. The woman is in a position to help her wards, but is so inured in her own vision of art that she is unable to recognize the talent behind Enid's caricature drawings. Bob Balaban plays Enid's dad as a clueless dolt who doesn't understand anything about his daughter. Teri Garr's cameo appearance as Enid's soon-to-be-again stepmom does nothing for the film. Brad Renfro, as the girls' friend, object of desire and target for teen torment, gets little air time and less to do.

Techs are sharp, especially the outfitting of Thora Birch by Mary Zophres ("Fargo"). The music, especially, has a place as a character in "Ghost World." Vintage jazz and blues tunes abound with particular attention paid to the 1931 Skip James song, "Devil Got My Woman." Of course, contemporary music is amply supplied, but the blues rules. Artwork, especially Seymour's Cook's Chicken scrapbook and Enid's portfolio of drawing, are a nice addition by Sophie Crumb, daughter of Robert.

"Ghost World" is a true teen movie, not just for girls. The angst, confusion and growing pains depicted are not aimed at one sex or the other and has a lot to say for both.