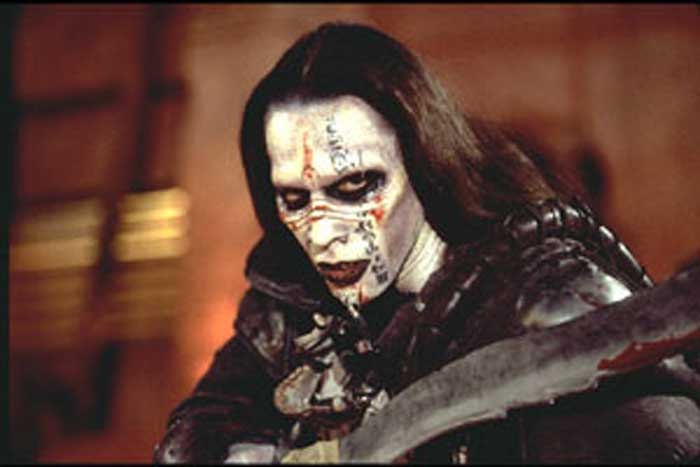 It's 175 years into the future and Mars is colonized by over ½ million Earthlings. To ensure order on the pioneer planet terrestrial laws apply and are enforced vigorously by the MPF (Mars Police Force). When an unmanned trained arrives from a far flung mining station, the only one aboard, handcuffed, is Lt. Melanie Ballard (Natasha Henstridge), and she has a horrifying story to tell her superiors in John Carpenter's "Ghosts of Mars."

The lieutenant was second in command on a team sent to bring in James "Desolation" Williams (Ice Cube), the red planet's most notorious criminal. Desolation is being held at Shining Canyon mining station, but when the cops arrive, they find the place deserted except for those held in the fortified confines of the local jail. Commander Helena Braddock (Pam Grier) splits up her crew, sending Ballard and two troopers, Kincaid and Descanso (Clea Duvall and Liam Waite), to locate Williams. Braddock and smart-mouthed Sergeant Jericho (Jason Statham) reconnoiter the compound and find some of the colony's inhabitants - headless corpses hung upside down in a gruesome, ritualistic display.

The cause of the slaughter is soon apparent when Braddock spots the remaining miners, possessed by some force that has rendered them inhuman. Self-mutilation is the norm for these creatures, led by a Marilyn Manson wannabee, Big Daddy Mars (Richard Cetrone), and the creepy critters are out for blood. The beleaguered cops and the few still-human survivors of the colony must battle the vicious monster of Mars until the train that took them into Shining Canyon returns. It's kill or be killed, or worse, be possessed by the ghosts of the distant planet.

"Ghost of Mars" is meat and potatoes filmmaking. John Carpenter is known, of late, for some truly hack work, like "Escape from LA" and the presumptuously titles "John Carpenter's Vampires." With "Ghosts" the helmer works from a script co-written with Larry Sulkis and tells a fairly conventional cops against the bad guys. Setting it on Mars gives it ready-made sci-fi status, but it is, still, a routine survival story.

Natasha Henstridge is not bad as the veteran Mars copper. She is too pretty and well made up for the character and is too Hollywood looking, but she acquits herself with the physical moves required. Ice Cube has done the same sullen tough guy character too many times and, while likable in a punch-you-in-the-face way, it's a carbon copy perf we've seen before. Jason Statham, with his Cockney accent and insouciant ways, makes himself notable and should get more work after "Ghosts of Mars." Blaxploitation icon Pam Grier is, sadly, used up very quickly and loses her head early on. Almost everyone else is alien fodder, including the aliens.

Techs aren't as cheesy as in "Escape from LA," but there is an artificiality to the whole thing that never lets you forget you are watching a movie. The story goes through its paces with the requisite explosions, machine gun fire and alien butt kicked as the steadily dwindling number of humans try to get away from the possessing Martians. The last moments of the end of the film give rise to the possibility of a sequel, if the box office numbers are good.