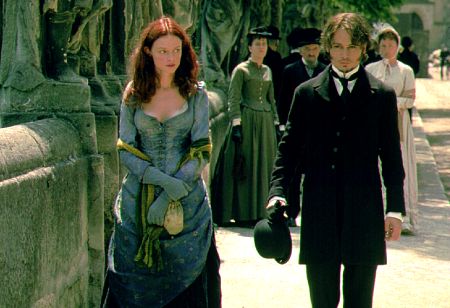 "One day men will look back and say I gave birth to the twentieth century."

In 1888, Inspector Abberline (Johnny Depp), addicted to opium and absinthe, has visions which help him solve crimes.  When he begins to have narcotic inspired dreams of petticoats soaked in blood, he's catapulted into the case of one of the most notorious serial killers in history, Jack the Ripper, who mutilated five prostitutes in the Whitechapel district of London.  Allen and Albert Hughes ("Menace II Society") direct this adaptation of the graphic novel by Alan Moore and Eddie Campbell, "From Hell."

Mary Kelly (Heather Graham), Kate Eddowes (Lesley Sharp, "Naked"), Liz Stride (Susan Lynch, "Nora"), Dark Annie Chapman (Katrin Cartlidge, "Naked") and Polly (Annabelle Apsion, "The War Zone") are friends who work the streets and try to protect one another from the street thugs who harass them for a pound a week in protection money. When one of their own, Ann Crook (Joanna Page), a girl lucky enough to have married an artist, Albert (Mark Dexter), and have a lovely baby, is kidnapped, and then one of the five brutally murdered, they suspect the men who torment them daily. But Abberline, who only Mary Kelly trusts, immediately dismisses that theory. His footwork uncovers the real identity of Prince Albert and his interview with Sir William, (Ian Holm, "Big Night") practitioner to the Royals, confirms his suspicions that the murderer must have the education of a surgeon.

While Abberline's deputy Godley (Robbie Coltrane, "Nuns on the Run") covers for him, rousing him from opium dens, his boss, Sir Charles Warren (Ian Richardson, "Dark City"), demands he collect facts before making a move, all the while nudging him towards a preconceived verdict against a Wild West Indian, Jew, butcher or tailor as certainly no Englishman could have committed these acts. Yet an elegant coach, driven by the tortured Netley (Jason Flemyng, "Snatch"), carries a top-hatted gentleman bearing pricey clusters of grapes into the working class district of Whitechapel. In reality the Ripper's true identity can only be conjectured, but "From Hell" posits a Freemason conspiracy designed to protect the family of Queen Victoria.

While Johnny Depp delivers a great cockney accent, he disappoints in the fictional role of Abberline. The character's attempts to deaden the pain of losing his wife in childbirth with drugs and alcohol leave Depp mostly in a reactive stupor. Worse, the romance with Mary Kelly is given no foundation other than one beautiful person hooking up with another. The casting of Heather Graham in the costarring role is the film's biggest problem. While the other four actresses, particularly Cartlidge, make attempts to actually look like prostitutes of the period, Graham is too clear of skin and white of teeth, betraying the immaculate attention to detail found in every other element of the film. In one realistic scene, we see the five friends sleeping tied to a wooden bench until a man unties the rope, awakening them as they tumble forward and go outside to wash up in a trough. Yet Heather looks like a cover girl. Look to supporting players Cartlidge, Lynch, Flemyng and Richardson for the interesting performances as when Flemyng's Netley lures Cartlidge's wary Annie into a dark alley like Deniro did Lorraine Bracco in "Goodfellas."

The film's real stars, though, are the technicians. Academy award winning production designer Martin Childs ("Shakespeare in Love") may receive another nomination for his recreation of London's Whitechapel district in Prague. Millennium Effects ("Saving Private Ryan") created exactly detailed reproductions of the Ripper's five victims, thankfully seen only fleetingly or partially obscured. Peter Deming ("Mulholland Drive") uses some nice photographic effects, such as a motion control shot showing the comings and goings of a crime scene while the victim and surrounds remain static in the frame. He gives us an under-carriage view of the Ripper's coach steps, which descend towards his victims like a guillotine. Makeup errs with Graham's fresh-facedness and the Ripper's obvious pupil prosthetics, but is dead on with Netley's disfigured ear and the general grittiness of the other street characters.

Despite its unconvincing romance, "From Hell" presents an interesting puzzle which clicks into place neatly.