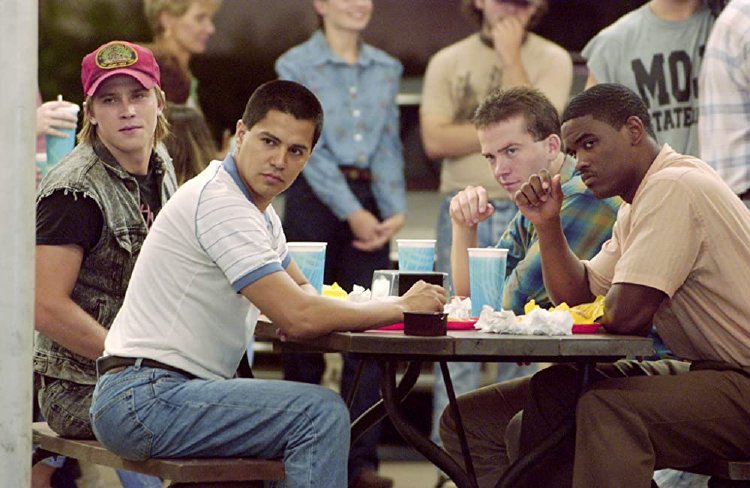 It’s the beginning of the 1988 football season and the Permian High School Panthers of Odessa, Texas, have the state’s best record of wins ever. But, the oil town has fallen on rough times with the petroleum business, literally, drying up and the local economy in shambles. The sole escape left to many town folk is to watch the Panthers reign supreme and instill hope in “Friday Night Lights.”

Director and co-writer Peter Berg (with scribe David Aaron Cohen, adapting the book by H.G. Bissinger, Friday Night Lights: A Town, a Team and a Dream), brings us to small town middle America with the based-on-true story about a high school football team taking on the challenge to win the state championship. But, there is a deeper psychological burden placed on the team by the town fathers. With the Odessa economy weakened and unemployment rising, the people of the Texas town turn toward the Panthers for relief, if for just a few months, from the daily grind – quite a load for a group of 17 year olds to shoulder.

Peter Berg does a solid job conveying the excitement, stress and challenge of a small town football team under the intense scrutiny of their supporters. Unable to shed the awesome responsibility, the members of the Panthers, when confronted by virtually any adult in Odessa, are constantly given the order (not request) to “get it done,” often by former champion players from the team’s winning years.

Friday Night Lights” concentrates its focus on the Panther’s coach, Gary Gaines (Billy Bob Thornton), and about a half dozen of the players. Where I expected Gaines to be an iron man coach and hard taskmaster (not having read the book), Thornton plays him as a more thoughtful man trying to juggle the pressures exerted upon him by the town fathers to win, win, win, with the responsibility for training and teaching his teenaged wards. With the film concentrating on the many games played, Thornton isn’t give a great deal of time to develop his character but the actor manages to create a 3D personage in Coach Gaines.

The young supporting cast, too, is not given much screen time to gain dimension but the youthful actors rise above the two-dimensional nature of their characters. Most notable is Derek Luke as cocky, talented offensive running back, Boobie Miles. Boobie knows he is the best on the team and makes no bones about letting everyone know. He has an assured life ahead of him with a college scholarship almost guaranteed and a future berth in the NFL – until he is tackled during a game and the tell tale “pop” is heard as his knee takes a hit. Suddenly, Miles’s future is not so assured. Luke fully develops his character, garnering sympathy and respect.

The other members of the team don’t get the chance to flesh out their player characters as much as Derek Luke, but they give it their best. Lucas Black, as quarterback Mike Winchell, is a concentrated young man trying to be the best he can at the game while also caring for his psychologically challenged mother. The young actor maintains the intensity he showed as a boy in the darkly sinister 1995 TV series “American Gothic” and uses it well in the limited role of Mike. Garrett Hedlund also puts dimension into his role of player Don Billingsley, a talented player living in the shadows of his champion dad (Tim McGraw), a hard-drinking martinet who berates his son publicly for not being as good as he was years ago. (This relationship gets the black-and-white treatment as Don and his dad go from being adversaries to the clichéd I-love-you-dad/I-love-you-son resolution in the end.)

Jay Hernandez is also quietly effective as Brian Chavez, a player who gets the job done without fanfare or showboating. Lee Thomson Young gives an understated performance as the third string running back living in Boobie’s shadow until he must belly up to the bar and take over for the injured star player. Grover Coulson gets decent mileage as I.V. Miles, Boobie’s uncle and mentor. The rest of the supporting cast fills up the background in a decent, though two-dimensional, fashion.

Techs are solid all around, with one notable exception. Lenser Tobias Schliessler takes the football action too close to the camera, giving the film a jarring, almost documentary look that loses the game in favor of tight, confusing images. Where the game plays should give the viewer a sense of tactics and strategy, Schliessler, instead, concentrates on the tackles and hits. The way “Friday Night Lights” shows the game prevented me from getting any sense of what the game of football really is. This “flaw” detracts from the rest of the well-crafted behind the camera work.

Friday Night Lights” is a slice of small town life where the success or failure of their beloved team will resonate and set the mood of the townsfolk for the entire year. The story follows the ’88 football season with a lot of energy, culminating in the big championship between the Panthers and the favored Dallas-Carter team – who look like a bunch of steroid cases in comparison to the Panthers. The Cinderella story does not follow the expected path and the big finale, which takes up the last quarter of the film, is handled with excitement.

Friday Night Lights” is being touted as the best football film ever. I don’t agree with that but do find it an interesting sports film that gives a believable feel to its small town sports fanatic mentality.