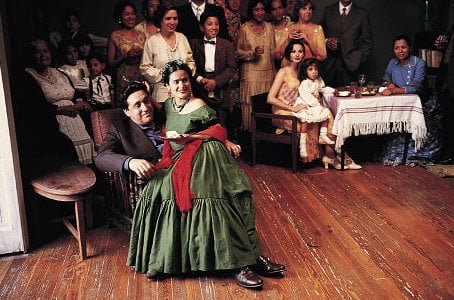 Schoolgirl Frida Kahlo (Salma Hayek), hidden from view, chides portly painter Diego Rivera (Alfred Molina) for being fat just as he is about to have his passionate way with his nude art model. The high-spirited girl, a short while later, is on a bus that collides with a tram and she is severely injured, requiring that she be encased in a full body cast. To help alleviate the boredom of her ordeal, her parents buy her art supplies and the soul of a painter is born in "Frida."

The daughter of a European Jewish photographer and Mexican mother, Frida Kahlo (Salma Hayek, "Traffic") was crippled by polio as a young girl only to suffer extensive injuries years later in a bus accident that would keep her in pain for the rest of her life. During her lengthy convalescence, Frida began to paint and once she could walk again, she audaciously visited famous muralist, Communist and womanizer Diego Rivera (Alfred Molina, "Chocolat") for a critique of her work. Rivera swept Frida into a new social circle and then his bed, before making her his third wife in 1929. The emotional torment caused by her husband in addition to the physical pain she already suffered defined the art created by "Frida."

Producer/star Hayek's long held passion for a film version of "Frida" succeeded where many had failed before her. But while director Julie Taymor's visual sense once again explodes on screen, the irony is that passion is exactly what "Frida" lacks. The film is gorgeous to look at but emotionally flat.

Four screenwriters (Clancy Sigeland, Diane Lake, Gregory Nava and Anna Thomas) are credited for adapting Hayden Herrera's biography and they tick through the defining events of Frida's life without getting at the minutiae that would make it breath. Her experiences, such as miscarriage, alienation in New York, bisexuality and horrific medical treatments are tied to her paintings, but Kahlo's fierce identification with her Mexican heritage is never commented upon.

Hayek always looks the part, believable as a young schoolgirl sneaking trysts with teenage lover Alex (Diego Luna, "Y Tu Mama Tambien") as equally as a middle aged woman of severely declining health, yet too frequently her delivery is awkward enough to evoke the quotes around her pronouncements. Much more natural is Molina as the bearish, larger than life painter whose politics clashed with his commissions. Support is also uneven. Valeria Golino ("Escape from L.A.") is fiery as Rivera's ex-wife Lupe, but Ashley Judd is out of place as Rivera pal, photographer Tina Modotti. Roger Rees (TV's "Cheers") is touching as Frida's father (despite an accent that wanders a bit) while Oscar winner Geoffrey Rush fails to convince as Leon Trotsky. Edward Norton ("Red Dragon") is fine in a small role as Nelson Rockefeller while Antonio Banderas plays a role so small one wonders why he's credited.

"Frida" soars highest with Taymor's inventive visuals, beautifully realized by production designer Felipe Fernandez del Paso ("Men With Guns"). Watershed moments are shown in paintings which spring to life. Frida's medical diagnosis is given by freakish Mexican Day of the Dead puppets. A simple moment, as a young Frida approaches the building where Diego is working, is striking in the juxtaposition of the flaming red of Kahlo's blouse against a pale yellow church and pastel blue sky, as caught by the eye of cinematographer Rodrigo Prieto ("Amores Perros").

The success of "Frida" is that it inspires a desire to know more about the artist. It's failure is that it doesn't suffice in and of itself.

Director Julie Taymor follows up her stunning filmmaking debut, "Titus," with a work that her star, Hayek, strived for years to get made. The resulting product is a beautifully crafted work, particularly on the visual level, that does a solid job of telling the life story of Mexican artist Frida Kahlo. While not quite the caliber of "Titus," "Frida" is a decent follow up work but lacks the major talents that made the former film such an outstanding achievement.

Salma Hayek does an earnestly stalwart job in portraying the title character. She capably carries off depicting Frida as a teenager all the way through to her end as she succumbed to the torments of her long-suffering body a quarter of a century later. I think a more multifaceted actress could have elicited more from the character but Hayek is to be credited for following her vision to bring the life of this remarkable woman to the screen.

The film could have been dubbed "Diego" as both the focus on the larger-than-life Rivera and his wonderful portrayal by Alfred Molina are the mainstay of the film. The character's presence is palpable, even when Diego is not on screen, and somewhat overshadows Frida's story. Molina does a terrific job in showing the bombastic artist's lust for life. He is a dedicated communist, though he doesn't mind the non-worker's perks that his talent has afforded him. He loves women, perhaps too much as he has been through two divorces because of his philandering ways. When Frida, still recovering from the terrible accident, brings him her first works for an honest critique, he is captivated by her unabashed charm and talent and takes her under his wing.

Frida proves herself to be Diego's equal on many levels, even understanding his lecherous ways - to a point. They get married after Rivera promises to always be loyal to her and they have an exciting, fast paced life surrounded by their artist friends. The couple gets along mainly because they are equals and Frida gives as good as Diego gets and willfully takes her own carnal knowledge with members of both sexes, including famous Paris chanteuse Josephine Baker and revolutionary leader Leon Trotsky.

Supporting cast has various degrees of success with Valeria Golino getting the best chance to give her character, Lupe Marin, Diego's passionate second ex-wife who still carries a torch for the charismatic artist. Geoffrey Rush stretches believability as the intellectual Leon Trotsky. I didn't feel for a minute that there was any tangible attraction between him and Frida. Ashley Judd, as femme fatale Tina Modotti, is unimpressive as is Edward Norton as Nelson Rockefeller, who confronted Rivera over the controversial and infamous mural that was supposed to grace the wall of Rockefeller Center. The conservatives objected to the depiction of Communist icon Lenin in the painting and Rivera refused to compromise, resulting in the destruction of the artist's best-known work. Roger Rees, as Frida's loving father, has some real chemistry with Hayek. Antonio Banderas appears in an almost nonexistent cameo as David Alfaro Siqueiros that can only be a favor to his friend Hayek.

Visually, "Frida" is a stunning achievement in imagination, art design, set and costume. Director Julie Taymor and company quite literally bring Kahlo's art to life with recreations of her work given to subtle animation that is surreal eye candy. The helmer has a proven ability to achieve visually arresting mise-en-scene and she puts her artistic eye to work here as well. The techs working with her - cinematographer Rodrigo Prieto, production designer Felipe Fernandez del Paso, art director Bernardo Trujillo, costume designer Julie Weiss - are first rate and help propel the film, looks wise, above the script and weaker secondary characters.

The homogenized screenplay, based on Hayden Herrera's book Frida: A Biography of Frida Kahlo, is episodic in nature and has the feel of many hands involved. Indeed, there are four credited scripters - Clancy Sigal, Diane Lake, Gregory Nava and Anna Thomas - and the film sometimes feels like pieces were parceled out to each.

"Frida" is a good film that has some brilliant moments of artistry throughout. Salma Hayek deserves kudos for working so long and hard to bring her passionate vision of fellow Mexican Frida Kahlo to the screen.