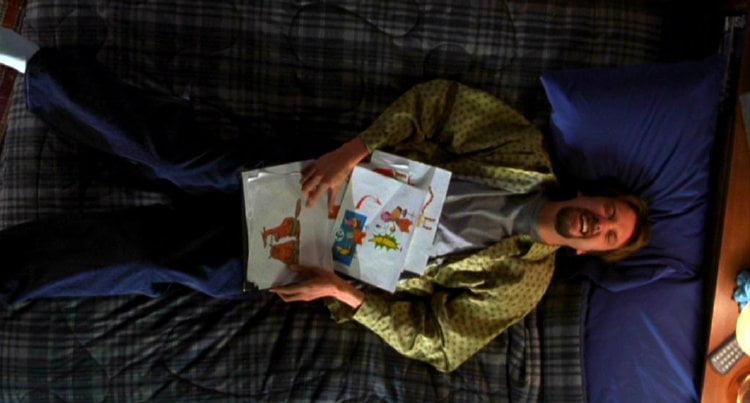 Gord Brody (Tom Green) is an aspiring animator approaching thirty who still lives in parents Jim (Rip Torn) and Julie's (Julie Hagerty, "Airplane") basement. As dad declares all out war, Gord secures a job in a cheese sandwich factory in far off LA and sets off to make his dreams come true. Gord doesn't make much of a go on his first attempt and lands back home with fawning mom and outraged dad in "Freddy Got Fingered."

Tom Green cowrites (with "Tom Green Show" scribe Derek Harvie), directs and stars in what is essentially Tom Green's primal scream. So, if Tom Green screams in an empty theater, does he make a sound?

It's clear that "Freddy Got Fingered" is at least partially autobiographical and Green sure has one hell of a complex about his dad (mom gets off easier when sonny boy advises her to go out and have sex with basketball players and Greeks). While this may be of interest to his hard core fans, there's little about Green's mania on display here to recommend this movie to anyone else.

The film starts promisingly enough, with a well executed skateboarding scene through a shopping mall set to the Sex Pistols' 'Problem' (Green's put together a first rate soundtrack) and yes, I laughed a few times. Green's flummoxing of a security guard with psychotic ramblings and his attempt to draw, make music and eat at the same time (the 'daddy would you like some sausages' scene repeatedly shown in the film's trailer) are inspired comedy. But what's funny about a paraplegic girlfriend who gets turned on by having her legs caned or a skateboarding injury that results in an exposed kneecap? A baby delivery bit shows some groan-inducing promise until enough blood is splattered to coagulate the laughs. Younger (by three years) brother Freddy's internment at The Institute for Sexually Abused Children does nothing but confirm one's worst fears regarding the film's title and Green's infamous 'handling' of a real horse, while not nearly as shocking as it would seem, doesn't make sense. By the time he repeats the gag with an elephant at film's end, the overall effect is numbness.

While "Freddy Got Fingered" has the admirable end result of depicting the harm in demeaning a child's self esteem, it's essentially a whole lot of Tom Green running around being noisy. Rip Torn, what were you thinking?