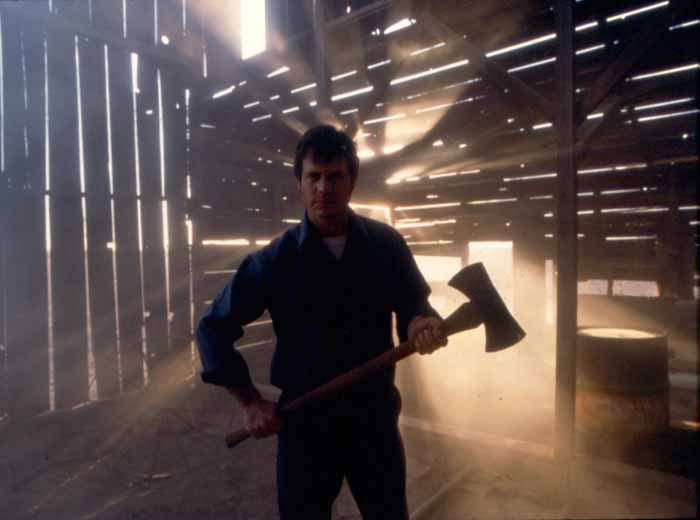 FBI Agent Wesley Doyle (Powers Boothe, "U-Turn") is visited by a man who says he's Fenton Meiks (Matthew McConaughey, "The Wedding Planner") and knows who the 'God's Hand' killer is. Doyle's doubtful, but agrees to drive the cuffed man to the Thurman municipal rose garden, where Meiks says the bodies are buried. Along the way, Meiks tells him a hair-raising tale of two generations of murderous religious fanaticism in star Bill Paxton's directorial debut, "Frailty."

The unsettled 1970's, with their terrorism of hostage taking and airplane hijackings, were rich years for the horror genre. Bill Hanley's prescient script features a man on an apocalyptic mission from God tailor made for 2002, but directed by Paxton in a retro style that recalls 70's drive-in movies.

In 1979, Fenton (Matthew O'Leary, "Domestic Disturbance") brings up younger brother Adam (Jeremy Sumpter) in a small Texas town while their widowed dad (Bill Paxton, "A Simple Plan") works as a mechanic. The stable, supportive all-male household is jolted from its foundation one night when dad awakens the boys to tell them he's been visited by an angel with a message from God. The Apocalypse is approaching and demons are appearing on earth in human form in preparation for the battle. God has chosen the Meiks to destroy them. Fenton is terrified, fearing for his beloved dad's sanity, but Adam buys the story, thinking of them as a group of super heroes.

Dad is led to a metal rod and an axe inscribed Otis (he was promised three weapons, although I never noticed a third, and invisibility in carrying out his mission). Underneath a car one afternoon, dad has a vision of a male angel descending in flames and quickly scribbles down 7 names on a notepad. Soon he's dismembering a nurse in the backyard shed as his children watch, one horrified and one awestruck. Adam claims to see visions of the victims' demonic sins when dad lays his hands on them, but Fenton attempts to call in the authorities with disastrous results.

Paxton the director keeps Paxton the actor on an even keel. The kindly father shows no change in personality as he begins trapping and slaying people from neighboring towns, although a hint that the visiting angel had something distressful to say about Fenton gives the boy further cause for alarm (as well as suggesting the Old Testament story of Abraham). Young O'Leary is terrific in what amounts to the lead role of the film, a boy too young to be tortured with such a darkly complex moral conundrum. Sumpter is adequate, a wide-eyed follower. The script gives him no room to question events or his brother's differing interpretation of them.

In present day, McConaughey is all sweaty seriousness as the narrator to Boothe's hammy heavy. The story's final twists are narrated like the punch line to an urban legend campfire horror. The film's murky cinematography by Bill Butler ("Anaconda") and distressed, retro production design by Nelson Coates ("Kiss the Girls") add to the 70's drive-in flavor, as does the cheesy rose garden set.

This Southern Gothic thriller is an ode to older horrors with an unsettlingly relevant religious twist. Not all of first time screenwriter Hanley's twists are surprising, but his conclusion is deliciously ambiguous.