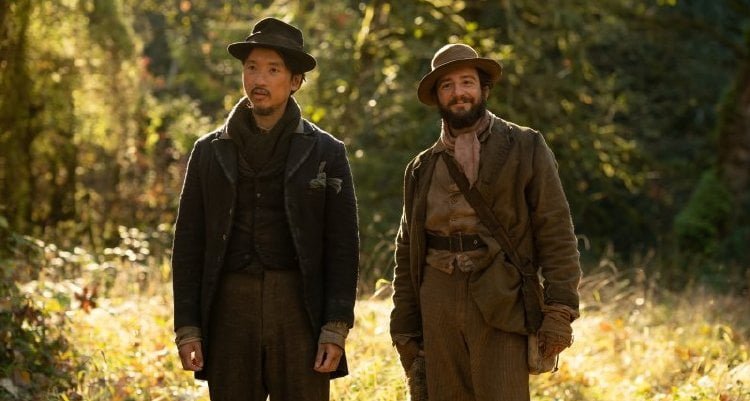 As the cook (John Magaro, “Carol”), for a group of fur trappers in 1820 Oregon territory forages for supplies, he comes across King-Lu (Orion Lee, “Star Wars: The Last Jedi”) hiding naked in the brush. Recognizing that the man is being hunted, Cookie gives him shelter and is later rewarded with an invite into King-Lu’s humble forest shed. The two men form an easy friendship that becomes a business partnership when King-Lu suggests they make use of the neighboring Chief Factor’s (Toby Jones) rare asset, The Royal West Pacific Trading Post’s “First Cow.”

Cowriter (with novelist Jon Raymond)/director Kelly Reichardt (“Certain Women) returns to the Pacific Northwest for a simple tale of friendship rooted in the compromised beginnings of American capitalism. Starting with the same William Blake quote (‘The bird a nest, the spider a web, man friendship’ ) that opens Raymond’s 2004 novel ‘The Half-Life,’ Reichardt foreshadows her characters’ fates with a present day prologue that recalls “Wendy and Lucy” as a young woman’s (Alia Shawkat) dog sniffs out human remains on a riverbank. She digs out a shallow grave where two intact skeletons lie side by side.

Cookie and King-Lu are a couple of outcasts, the quiet former baker’s apprentice dreaming of opening a hotel while the Chinese immigrant yearns for a nut tree farm. No sooner has Cookie announced that ‘there is nothing better than a buttermilk biscuit,’ than King-Lu is performing nighttime lookout duty from a tree as Cookie milks Factor’s cow, gently conversing with her. The next day, Cookie’s biscuits sell out and soon lines form as he fries oily cakes to order. Cookie and King-Lu’s fortunes are looking good, King-Lu hiding a bag of silver coins in a nearby tree as they decide where to settle.

But one of their most appreciative customers turns out to be Factor himself, the man never questioning how they’ve been able to make a cake that tastes like London. Wishing to impress a guest who disdains the region, Factor requests a custom clafoutis to serve for tea. All are indeed impressed, but when Factor shows off his cow to the assembled, bemoaning her lack of output, his guest is quick to note the animal’s affection for the baker. Cookie is ready to cut and run, but King-Lu demands that ever-fateful last dip into the well.

Although cinematographer Christopher Blauvelt shoots in a 4:3 aspect ratio that accentuates character, Reichardt gives us a strong sense of place, albeit one that is only beginning to take shape, a muddy crossroads for all manner of travelers and natives where Factor’s simple home with his cow tied to a tree represents the high point of society. The relationship between Magaro’s gentle, quiet Cookie and Orion’s talkative, scheming King-Lu out in the woods is like the inverse of “Old Joy’s” modern camping trip, two men forging a future together in the past versus two men realizing their paths have diverged in the present. The two actors fall into as easy a dynamic as their characters, ably supported by the naïve Jones and the pretty and compliant Evie the cow. (The film also features “Certain Women’s” Lily Gladstone, Ewen Bremner, Rene Auberjonois, Scott Shepherd, Gary Farmer and Mitchell Saddleback.)