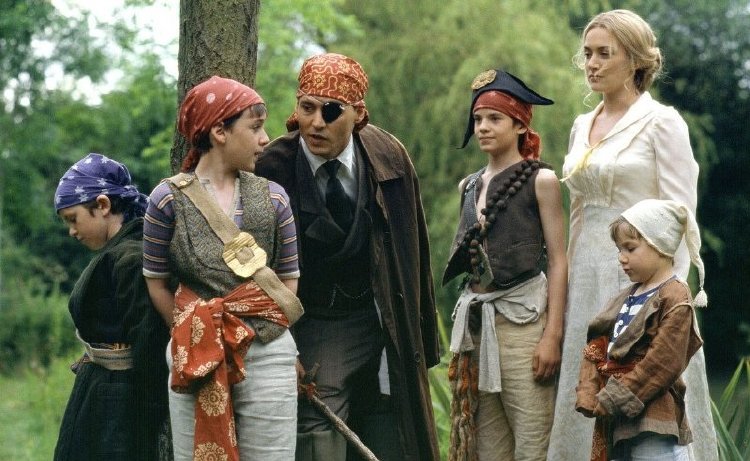 Scottish playwright J.M. Barrie (Johnny Depp) goes to work one day in London's Kensington Gardens and meets the Llewelyn Davies boys, a quartet that will provide much needed inspiration and become a life long commitment. The married Barrie's friendship with their widowed mother Sylvia (Kate Winslet) causes gossiping tongues to wag and his rocky marriage to flounder, but James persists in leading his adopted family into "Finding Neverland."

Scottish playwright J.M. Barrie (Johnny Depp) goes to work one day in London's Kensington Gardens and meets the Llewelyn Davies boys, a quartet that will provide much needed inspiration and become a life long commitment. The married Barrie's friendship with their widowed mother Sylvia (Kate Winslet) causes gossiping tongues to wag and his rocky marriage to flounder, but James persists in leading his adopted family into "Finding Neverland."

After trying, and failing, to entice his wife Mary (Radha Mitchell, "Man on Fire," "Everything Put Together") out for a walk, Sir James instead finds a playmate beneath his park bench. Michael (Luke Spill) is a young boy who says he's been imprisoned by the evil Prince George, in actuality his older brother (Nick Roud). Soon Barrie is delighting the Llewelyn Davies family by dancing with Wolfie, his Newfoundland dog - that is delighting all but one. Peter (Freddie Highmore, "Two Brothers"), the second eldest of the boys, doesn't believe that Wolfie is a dancing bear, instead 'just a dog.' Sir James is determined to help the serious boy get over the grief of losing his father and reawaken to the wonders of childhood.

David Magee's adaptation of Allan Knee's stage play "The Man Who Was Peter Pan" has a wonderful duality that Forster exploits to great effect. As Barrie has adventures with the boys, he is also shaping his play with American theatrical producer Charles Frohman (Dustin Hoffman, in his second thoroughly unaffected supporting performance of the year). The play within the play finds Barrie dressed as a pirate (shades of the Captain Jack!) cavorting with boys transformed into cowboys and Indians. Forster crosscuts between Barrie's imagined backdrops, soon to appear in those theater sessions, and the Llewelyn Davies' backyard garden. When Barrie turns in for the night, he and his wife enter separate, adjoining bedrooms, but his door opens to an open field and bright blue sky.

The real Barrie was always more comfortable around children than adults and his "Peter Pan" equates the release of childhood with the beginning of a journey towards death. The filmmakers of "Finding Neverland" use fantasy as the intrinsic link between both life journeys. Social mores are also explored from two angles, as the modern thinking Sylvia and Barrie create an unconventional family. Barrie's social-climbing wife and Sylvia's society mother, Mrs. Emma du Maurier (Julie Christie, "Troy"), both strongly disapprove of the connection between Barrie and the Llewelyn Davies. His friend, Sir Arthur Conan Doyle (Ian Hart, "Harry Potter and the Sorcerer's Stone"), even warns him of the pedophilic gossip surrounding his relationship with the boys.

The ever reliable Depp presents the author of "Peter Pan" first and foremost as a gentle man in the truest sense of the expression, trying to affect change by example, never demand. Depp is a natural working with children, achieving a sense of conspiratorial clowning amidst chaos, while treating the women in his life with deferential, courtly courtesy. His smooth citified Scottish accent never falters. Depp and Winslet click with a homey comfort and familiarity that given the times, hints at forbidden romance. Winslet is fabulous as a fiercely protective mother who has not closed herself off to her own womanliness. She's also independent, standing up to her mother's interference even when her resources are clearly lacking.

Mitchell, in a difficult role, remains sympathetic portraying a woman who clearly wants to connect with her strange husband, but does not know how. She and Depp dance around each other, always off by one step. Christie has a nice arc, introduced as almost villainous (her threatening gesture to the boys with a coat hangar is presented as the germination of Captain Hook), then gradually warming to Sir James' intentions and influence - she regains both the mother and the child within herself. Young Highmore shows an intensity beyond his years while Roud creates an eldest brother facing tough responsibilities at a young age, becoming an adult in the process. Support is strong even in the smallest roles, with Eileen Essell (the old Irish tenant of "Duplex") a standout in the second of her two brief appearances as theater-goer Mrs. Snow. Kelly MacDonald ("Intermission") is also strong as the play's Peter Pan.

"Finding Neverland" is a moving tribute to the man who encouraged his readers to never lose their sense of wonder. As Mrs. Snow's character so emotionally regrets, 'There's a crocodile chasing after all of us.'

Playwright J.M. Barrie (Johnny Depp) stands off stage and watches as his latest play meets a hohum audience response. Thus chastened, he takes to long walks in London’s Kensington Gardens with his oversized St. Bernard, Porthos, where he befriends a young widow, Sylvia Llewelyn Davies (Kate Winslet), and her four free-spirited sons. The young, plucky family inspires the author and leads him on his journey of “Finding Neverland.”

Director Marc Forster and screenwriter David Magee adapt Allan Knee’s stage play, “The Man Who Was Peter Pan,” and bring to the screen an imaginary and imaginative telling of how the century-long, immensely popular play, “Peter Pan,” came to be. Not having read Knee’s work, it is hard to see the line where his oeuvre leaves off and Hollywood takes over. To the filmmakers’ credit, their adaptation has a big-hearted, good-natured feel about it that rings true to its source material.

Johnny Depp, as James Barrie, adopts a soft Scottish burr with an educated melody about it that is pleasing to the ear. The actor also imbues the boyish sense of wonder and playfulness that the writer must have had to envision such a wildly fantastical story. In addition, there is real chemistry between Barrie and the Llewelyn Davies boys and their mother. Particularly strong is the relationship that develops between author and the second youngest boy, Peter (Freddie Highsmith). Barrie’s inspiration for his most famous character is a serious, taciturn little boy who resents James’s attempt to be their father figure when, in fact, Barrie is just trying to open the boy’s eyes and enjoy the world. In other words: to believe.

The core story of Barrie’s growing relationship with the stalwart and, thanks to Sylvia, progressive little family is coupled with other story lines and characters that make “Finding Neverland” a much more complex film. As James’s love for the Llewelyn Davies family nurtures and grows, his marriage to his wife, Mary (Radha Mitchell), continues to deteriorate. The socially conscious Mary is taken aback by her husband’s friendship with the pretty young widow and her boys and can’t cope with the scrutiny on her marriage by those casting judgments about her. Mitchell has the toughest role in the film, opposing the near angelic Sylvia, and acquits herself with a strong performance.

Kate Winslet is luminous as Sylvia. There is an assured lovingness to her manner that says that, no matter what happens, as long as she has her boys, all will be well. Winslet also gives a great deal of dignity as Sylvia’s fortunes turn and her health fails. The warm affection between Barrie and Sylvia is palpable and an aura of friendship and love surrounds them. The honest chastity of the love story is a breath of fresh air in today’s cliché and sex driven movies.

The four boys that make up the Llewelyn Davies brood are ably played by the young actors. Freddie Highsmith gives a good turn as the serious little boy, Peter, who eventually opens up to the child-like mind set of Uncle Jim. Nick Roud, as the eldest son, George, is convincing as the sibling who, though only a teenager, is ready to take on the responsibility as the family patriarch. Good, too, are Joe Prospero as #2 son, jack, and Luke Spill as the youngest Llewelyn Davies, Michael. Dustin Hoffman gives, as usual, a solid performance as American impresario and J.M. Barrie financial backer, Charles Frohman, providing comic relief as he frets over assuredly losing money with his writer’s wacky idea for a play. Ian Hart plays James’s friend and advisor, Arthur Conan Doyle, but the fame of the Sherlock Holmes creator is downplayed in favor of his friendship to Barrie – a nice touch by the filmmakers.

The story, as I said, has many things going on and you must pay attention to what’s going on. There is the love of a man for his “adopted” family; the love and friendship between James and Sylvia, and what that means in a Victorian England setting; the conflict between the artist and his ways and his responsibilities to his marriage with Mary; the conflict between Barrie and Sylvia’s mother, Emma du Maurier (Julie Christie), who sees the writer as a dangerous intruder into he family’s life; the behind the scenes look at staging a special effects extravaganza at the turn of the 20th Century; and, the creation of a fantasy adventure that would come to please and thrill untold millions of kids of all ages for over one hundred years.

The artfully accomplished production design by Gemma Jackson is a skillful blending of period sensibility and magical fantasy as the worlds shift between the reality of Victorian life and the imagination of Barrie’s world of pirates, fairies, Indians, a giant crocodile and the story of a flying boy who doesn’t want to grow up. Costume, by Alexandra Byrne, captures the Victorian era of stiff collars and frock coats for the men and restrictive corsets and modest dresses for the women. She crosses over into the fantasy world of Barrie’s making easily. Camera works, by Roberto Schaeffer, also lends to the look and feel of the real and fantasy worlds created.

Director Marc Forster, who solidified his position as a talented filmmaker with the harsh and hopeful Monster’s Ball,” has gone a lighter, more fanciful route with “Finding Neverland” and accomplishes things quite well. His exceptional cast and crew make for a warm, often delightful story that culminates in the first staging of his famous play and Barrie introducing Sylvia, in a sentimental sequence that works, to Neverland.