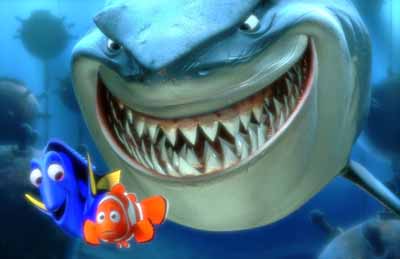 Marlin the clown fish (voice of Albert Brooks) was as happy as a clam with his lovely wife Coral (voice of Elizabeth Perkins) and about 400 babies about to hatch. But, when a vicious barracuda invades his new home he loses Coral and all but one of the eggs. That survivor, named Nemo, is now raring to go to school despite his overly protective father's fears and anxieties over the cold, cruel world. As fate and luck would have it a diver captures the venturesome little clown fish and Marlin must go on a quest for "Finding Nemo."

Marlin (Albert Brooks, "The In-Laws") is a sad and wary clown fish after having lost his wife and 299 unhatched babies to a vicious barracuda at the edge of Australia's Great Barrier Reef.  The one child saved, Nemo (Alexander Gould, "They") has an unformed fin, so dad is doubly overprotective of the lad.  On the first day of school, Nemo's embarrassed and challenged by his father's hand-wringing in front of his classmates and rashly swims out to a boat in deep water where he's promptly scooped up in a diver's net.  Distraught, Marlin sets out after the boat, picking up an unlikely companion, Dory (Ellen DeGeneres, "EDtv"), a blue tang with short term memory loss, on his way to "Finding Nemo."

Disney's "Pinocchio" meets "Memento" in the latest charming, computer animated film from executive producer John Lasseter's Pixar.  "Finding Nemo" doesn't reach the heights of "Toy Story" or "Monsters, Inc." because of a more familiar storyline, but its underwater marvels and fish tank politics will keep audiences alternating between delight and dread when they're not helpless with laughter.

Marlin presents his wife Coral with their new pink anemone home at the edge of a drop off and she accepts his embrace of the grandeur of the ocean.  After the deep issues tragic danger, though, Marlin is practically paralyzed with fear, rarely venturing far from safety.  His excitement of vast possibilities is reborn when Nemo gets his first look at the big blue, but Nemo's curiosity ironically lands him in a the fish tank of a dentist's office overlooking Sydney Harbour.

Meanwhile Marlin's anguished panic is offset by the spirited optimism of Dory, even if she can't quite remember what they're doing from one minute to the next.  The duo will face a trio of sharks, underwater mines, deep sea angler fish, the Eastern Australian Current and the belly of a whale.  And that's just before a series of surface adventures begin.  Even though he's confined to a tank, Nemo must be indoctrinated by swimming through a 'ring of fire' at the summit of Wannahawkaloogie and brave an escape mission within the tank's filtration system before his own literal fish-out-of-water experiences.

Pixar animators went the Disney route in their study of fish to capture natural movement.  This is exhibited in large scope by the darting of schools of silvery fish and in detail by the gradual blackening of Bruce the shark's eyes when he smells prey. Lasseter describes three different textures used for the fish bodies as "gummy, velvety and metallic" and while the fish look sensational underwater, they have the unfortunate cast of vinyl when shown on the surface.  Supervising technical director Oren Jacobs defines lighting, particulate matter, surge and swell, murk and reflections and refractions as the properties that make water look like water and Pixar delivers. Directors of photography Sharon Calahan and Jeremy Lasky have developed a complex and beautiful lighting scheme to recreate the sensation of snorkeling on a sunlit day. Composer Thomas Newman ("Road to Perdition") delivers an aural backsplash that never overwhelms the visuals.

As usual, vocal talents have been meticulously cast.  Brooks appears as a worrywort dad for the second time in as many weeks, but he's much better matched here with DeGeneres, who is "Finding Nemo's" biggest catch.  The concept of a fish with short-term memory loss sounded dubiously annoying, but DeGeneres just swims off with it.  Her infectious good nature and naive screw ups are made totally endearing.  Then, there's that whale singing...  Other denizens of the deep include Barry Humphries (a.k.a. Dame Edna) as Bruce and fellow Aussies Eric Bana ("Black Hawk Down") and Bruce Spense ("Dark City")as his hammerhead and mako self-help buddies, director Stanton as surfer-dude-speak sea turtle Crush and John Ratzenberger ("Toy Story") as an entire shape-shifting school.  The tank is ruled by Willem Dafoe's ("Spider-Man") Gill, a maimed moorish idol who yearns to return to the sea and his more satisfied pet store inhabitants Brad Garrett (TV's "Everybody Loves Raymond") as puffer fish Bloat, Austin Pendleton ("A Beautiful Mind") as Gurgle, a worried royal gramma, Vicki Lewis ("Pushing Tin") as damselfish Deb and Allison Janney ("The Hours") as Peach, the tank's lookout starfish.  Comic amusement is provided by Stephen Root ("Office Space") as a yellow tang that obsesses over tank bubbles and Joe Ranft ("A Bug's Life") as Jacques the fastidious cleaner shrimp.  Oscar winner Geoffrey Rush ("Frida") is a helpful pelican who connects the two different worlds. Nine year old Alexander Gould has just the right amount of pluck for the voice of Nemo.

"Finding Nemo" finds some familiar elements from past Pixars.  Darla, the dentist's bratty niece who may be Nemo's destiny, is a female replay of "Toy Story's" Sid while the colorful fish tank accessories evoke the 1989 short which precedes the film, "Knick Knack."  But the expert storytellers at Pixar are still unsurpassed in the genre, as evidenced by their clever, elevating use of the bathroom joke with a juvenile octopus who squirts black ink when scared, the bubble from an underwater explosion being misinterpreted by one of a pair of pelicans floating on the surface and a couple of crabs battling over waste from a water treatment plant.  The message in this delightful family entertainment even addresses both parent and child.  Dory spins Marlin's vow to never let anything happen to Nemo into a pronouncement of an existence devoid of experience, while Nemo learns that his fearful father's love will endure any danger.

If ever there was a Disney/Pixar title that might benefit from the 3D treatment, it's "Finding Nemo," and, thankfully they've done it just right.  Seeing the film on the big screen for the first time in almost 10 years with added dimension given to ocean corals, schools of fish the Eastern Australian Current and the murky depths of a sunken submarine was almost like seeing it anew.  Once again I marveled at the realism brought to ocean water where tiny particles are suspended and shafts of sunlight dance about - in sharp contrast to the crystal clear environment of the dentist's aquarium where Nemo has been imprisoned.  In fact, my original B+ score seems stingy now, ensuing years giving the references to past Disney films more of a sense of history than unoriginality.  The only flaw which remains in the film is the tendency towards a Plasticine look on some of the fish parts, even when such details as reflective scales are beautifully rendered.  Albert Brooks gives a heartbreaking performance as one of the most desperate family men in cinema, having to overcome deep rooted fears to save his son and Ellen DeGeneres, who is rumored to be returning to her role as Dory for a sequel, is as dippily delightful and, yes poignant, as ever.

This amiable, beautifully visualized fish-out-of-water (well, in-the-water, really, but, you know...) story that offers few, if any, plot surprises, but is such a good natured little film that it should do well with younger and older kids, their parents, grand parents, aunts, uncles, siblings and cousins. Heck, this should appeal to just about anyone with a sense of whimsy and fantasy.

The ongoing teaming of Disney and Pixar has always been successful and each of their collaborations can be rated very good on up. "Finding Nemo" will not be an exception. While the fishy characters, for the most part, are anthropomorphized with typical human traits, the environment that they live in - the deep, blue sea - is an amazingly realistic looking place. The computer graphics create a visual world that you would actually see if you dived down 50 feet on a coral reef - the waters in which our heroes live have the look and feel of reality.

The by-the-numbers story: the inquisitive and impatient son challenges an overly protective father's authority. The child, Nemo here, is snatched away because of his rebelliousness and it becomes the sole mission of his milquetoast father, Marlin, to overcome his fears and many adversities along the way to rescue his beloved son. Both learn much along the way and new, deep friendships are made. "Finding Nemo" is an honestly nice family film that blends virtual reality with its fantasy world.

The characters that populate the world in which Marlin must travel to save Nemo and the boy's world of captivity in a fish tank in the dentist's office are richly diverse. Brooks is a perfect choice of the whining, insecure dad who proves his real mettle when push comes to shove. Dory (voice of Ellen DeGeneres), a blue tang with short term memory problems, is lovable, charming and funny as she promptly forgets everything - except for the one crucial bit of information that will help Marlin find his son. The rest of the "supporting" cast is well matched with the vocals suiting the fish to which they are paired.

Nemo, as voiced by nine-year old Alexander Gould, has the right little boy quality, with intelligence and courage. The rest are just as well suited. Barry Humphries (known to most as Dame Edna) is amusing as Bruce the shark who is on a 12-step program to stop devouring fish. Willem Dafoe as Gill, Nemo's fellow inmate and much-scarred veteran of many escape attempts from the doctor's aquarium, is the sensei of his young friend. Helmer Andrew Stanton voices Crush, a 150-year old sea turtle, who is the epitome of "you are as young as you feel" surfer dude who helps Marlin on his quest to get to Sydney and find Nemo. Joe Ranft, who voiced the lovable chubby caterpillar in "A Bug's Life", is a riot in his small (no pun intended) but effective characterization of Jacques, the cleaner shrimp. There are many, many more familiar names in the voice cast.

Technically, "Finding Nemo" combines the familiar look of traditional cel animation but fully rendered with CGI and in all its vibrancy. The computer graphic work allows a level of realism of the undersea world that makes you want to grab a mask and fins and go down for a look yourself.

The early screening of "Finding Nemo" was preceded by the 1989 Pixar creation "Knick Knack," a marvelous early use of CGI that also displays the storytelling talents of its creators that have wonderfully been magnified to feature length miracles. "Nemo" isn't the best of the Disney/Pixar collaboration but it ain't shabby.