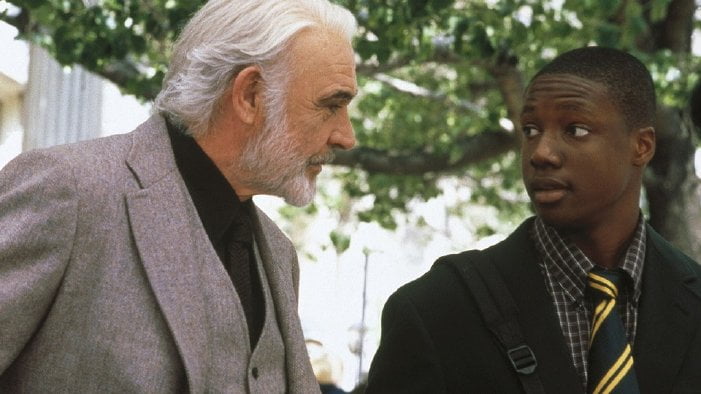 Jamal Wallace (newcomer Rob Brown) loves to read and write in his journals, but hides this fact from his family and buddies in the Bronx. In public, he spends his time playing basketball at a local court watched over by a mysterious stranger from a window in an old building. On a dare, Jamal enters the stranger's apartment, but is frightened by the old man who lives there and runs, leaving his backpack. This fortuitous event will be the beginning of an unusual mentorship and great friendship in "Finding Forrester."

"Finding Forrester" skates in upon a slate of comparisons to director Gus van Sant's own "Good Will Hunting." While there are similarities, the new film has quite a different feel than the Boston blue collar drama.

Jamal sees his backpack hanging in that mysterious window - is it a taunt? an invitation? He resists, and wins, when the pack suddenly lands at his feet in the street one day. Reunited with his beloved journals, Jamal is first shocked, then intrigued to find that his writings have been marked up like school assignments by an obviously intelligent and interested reader.

A few false starts later, and Jamal meets the stranger, a gruff, Scotch swilling Scotsman (Sean Connery) who gradually opens up, pleased to share a love of the written word. Then Jamal's secret is blown with his mother and brother Terrell (Busta Rhymes, "Shaft") when test scores reveal his intelligence and result in a scholarship to Mailer Callow, a Manhattan prep school that needs a winning basketball team.

At Mailer Callow, Jamal, a black teen from the Bronx, must navigate the world of the white and wealthy. Claire (Anna Paquin, "X-Men") steps in to lead the way, beginning another odd relationship for Jamal. When his story's conflict arrives it's twofold. Jamal discovers that his Scottish friend is William Forrester, a J. D. Salinger-like reclusive legend, who obviously wishes Jamal to keep his identity secret. Professor Crawford (F. Murray Abraham), a failed author and Forrester devotee, doesn't believe a boy from the Bronx is capable of writing Jamal's words and sets out to discredit him.

While Mike Rich's screenplay doesn't offer any real surprises, sometimes dipping into cliche, rebounding with good dialogue, the amazing chemistry between veteran actor Connery and the untrained Brown is palpable. Brown, who answered a casting call in hopes of getting wages as an extra to pay off a cell phone bill, is one of the year 2000's great acting discoveries. Brown gives Jamal grace, confidence and smarts, holding his own against the Scottish Oscar winner. Rob Brown is the main reason to see this film. Connery also gives a fine performance, but isn't given as much to work with. Support is OK, but only Busta Rhymes as Jamal's brother and the (uncreditted?) actress who plays his mom really distinguish themselves. Abraham is a bit too patently villainish.

Van Sant's tech crew does a fine job, with fluid camerwork by Harris Savides ("The Yards") and nuanced art direction by Jane Musky ("At First Sight"). Unfortunately, he allows his film to play for over two hours and the material doesn't warrant it. A cutesy cameo at film's end may have seemed a good idea at the time, but calls too much attention to itself, working against the cinematic experience. Still, "Finding Forrester" is a solid entry into the 'teacher/student' genre and the first film of a potential new star.

William Forrester (Sean Connery), four decades ago, received the Pulitzer Prize for his first and only novel, Avalon Landing, then seemed to drop from the face of the earth. That is, until he crosses paths with 16-year old Jamal Wallace (Rob Brown), an intelligent and talented neighborhood kid who has the same passion for writing as the old recluse in Gus Van Sant's "Finding Forrester."

Forrester is known in his Bronx neighborhood only as "The Window." The kids playing basketball across the street see his shadowy figure looking out the window of his run down brownstone, but no one knows anything about the man. On a dare, Jamal agrees to sneak into the hermit's apartment and take something as proof of his visit. The deep voiced, white haired man startles the boy and, instead of procuring a trophy, he leaves his backpack containing all his writing in the man's cluttered apartment. Jamal figures that that's the last of it until the mystery man returns the pack - with all of Jamal's notebooks annotated and graded. This begins a teacher/student relationship that ends up going both ways, with each learning life-changing lessons from the other.

I was struck, while watching "Finding Forrester," that I had been there before, but I couldn't quite put my finger where and when, exactly. It really isn't a mentor/apprentice flick like "The Karate Kid" where the "kid" learns all manner of things from his guru that change his young life. "Forrester" is a two-way road as the student/teacher relationship blurs between Forrester and his protigi. As the story progresses, Jamal is not the only one who gets to grow and mature both emotionally and intellectually. By the end of the film, no surprise, the older man, too, becomes a different, better person. Then, it dawned on me - "Man Without a Face" and "Renaissance Man" both draw on the same premise. Unfortunately, the two-way street story didn't work too well in either of those movies and works only a little better in "Finding Forrester."

The reason that "Forrester" works better than other films of the same ilk rests squarely on the shoulders of young Rob Brown. The newcomer, a non-actor until now, literally dominates the screen with a fresh, self-assured presence that allows Brown to play opposite the veteran Connery like a true equal. Brown exhibits no tentativeness in his character and delivers his soliloquies and intellectual bon mots with a certain hand. When Jamal is derided by a snobbish yuppie as being ignorant about his precious car, a BMW, the young man lets the guy have it with a complete history of the marque that leaves the snob speechless. Brown pulls this and other speeches off with a natural cadence that rings true. Plus, his deftness at playing basketball (an important point of the story) only adds to his character. It is an impressive debut performance that raises the whole film up a notch.

Sean Connery is a seasoned thespian who has achieved worldwide icon status, so there are certain expectations whenever he stars in a movie. He has transitioned from the cool, suave James Bond persona into a senior statesman of the acting profession. Now, he is usually positioned as the wise sage who dispenses his knowledge to his various neophytes (see "Name of the Rose," "The Untouchables," "Rising Sun" and "Entrapment," among others). He does that in "Forrester," but with a more vulnerable spin on the character. The vet thesp does not try to upstage his costar, either, allowing the younger actor to effectively play off of Connery's character.

Supporting cast is left to fill out the background without intruding on the action too much. F. Murray Abraham plays high school teacher Robert Crawford, a less talented contemporary of William Forrester who questions Jamal's education abilities when the boy gets a scholarship to Crawford's prestigious private school. He's too obviously a device to allow the arrogant teacher to get his comeuppance from Jamal and William by the end of the flick. Anna Paquin is a fellow student of Jamal's at his new school. The pretty young actress comes on strong, but her character becomes ambiguous as a hint of romance with Jamal is introduced but goes nowhere, as if the makers didn't have the guts to play out an inter-racial relationship. Busta Rhymes, in the small part as Jamal's parking lot supervisor brother Terrell, is a funny character, providing much of the comic relief for the film. Other supporting parts are generic, including Michael Nouri as Paquin's father.

The main attraction of novice screenwriter Mike Rich's script is the dialog afforded to Connery and Brown, especially Brown. A film about the art and craft of writing should have some discussion of the nuts and bolts of that craft. Rich provides a good deal of such discussion, effectively, between the two characters, often times to intellectually funny ends. Otherwise, the story follows routine lines as Jamal faces the scandal and accusation of plagiarism and Forrester overcomes his own fears to come out of his reclusion and help his young friend.

Helmer Gus Van Sant, known for his edgy, independent filmmaking, like "Drugstore Cowboy" and "My Own Private Idaho," has gone mainstream in recent years. His "Good Will Hunting" brought him to "Hollywood." His remake of Alfred Hitchcock's "Psycho" smacked of acceptance of Van Sant (if not his lovingly crafted remake) by the big guys on the West Coast. "Finding Forrester" lacks any of the helmer's earlier distinctive directing style. It is straightforward, routine storytelling that lacks Van Sant's mark, but helps make him a directing attraction for conventional movies.

Tech credits are solid, although the editor (Valdis Oskarsdottir) could have used some judicious direction in cutting the film down from its near 140 minute run time to something that would have kept the movie tighter and more viewable. As it is, you expect what is going to happen early on and I got impatient waiting for the final resolution of the tale to get under way.

"Finding Forrester" should get a decent draw, initially, because of its megastar Connery, but the real reason to see it is for the remarkable debut of Rob Brown. Now, here is a kid who is worth the price of admission.