Final Fantasy: the Spirits Within 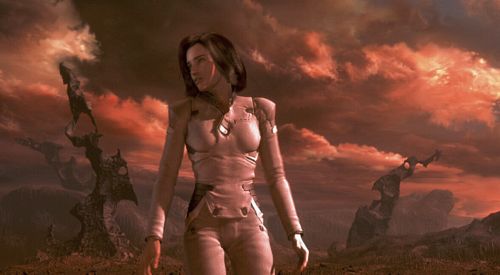 Aliens beings have taken over the Earth. The great cities are deserted and precious few humans remain to repel the invaders and reclaim the world for mankind. Aki Ross (voice of Ming-Na) and her mentor Dr. Sid (voice of Donald Sutherland) must develop their "wave theory," the only antidote to counter the alien phantoms in this latest video game to become a feature length movie in "Final Fantasy: The Spirits Within."

It was inevitable. Ever since Pixar Animation brought "The Tin Toy" to life in 1988 as the first all-computer generated (and Oscar-winning) short, the animation industry has been striving to create a realistic world using CGI ever since. A few years later "Toy Story" wowed us and, most recently, "Shrek" bowled the world over. Now, video game master Hironobu Sakaguchi takes his own, popular game series, Final Fantasy, and brings his animated video world to the big screen.

Live action films from video games have been around for a while. Super Mario Brothers, Teenaged Mutant Ninja Turtles and Might Morphin Power Rangers were all fodder for the video-game-turned-movie market. The latest of the live makeovers, "Lara Croft: Tomb Raider," is currently having a successful run at theaters everywhere. But the video game to video film niche has not, until "Final Fantasy," been tapped. Vid king Sakaguchi is the first to make the leap from creating his own popular gaming software to crafting a big-screen CGI version of his brainchild.

The brief description at the beginning of this review lays out the basic story. Aliens, in this case amorphous monsters that live just on the edge of human vision, are able to tear the spirit out of their victims, leaving their bodies an empty shell. The military, led by General Hein (James Woods), is gung ho against the invaders and, because they killed his family, the general will stop at nothing to stop the alien invaders. Of course, the misguided military mogul does not see the danger of this stop-at-nothing-to-win ideology and it is up to the scientists, in the "persona" of Aki and Dr. Sid (with the help of heroic Captain Gray Edwards (Alec Baldwin) and his loyal Deep Eyes SWAT team) to save the world.

"Final Fantasy" is a traditional action/adventure flick with the exceptional difference that there is, technically, little of tradition in the filmmaking. Much like "Atlantis: The Lost Empire," we get a rousing adventure that is made up with a series of high-tech battles that pit man against monster. The CGI used here is outstanding, with the action realistic and human movements and expressions genuine. The looks of the younger characters still has a smooth artificiality to it that keeps it just a step away from being "real" (though I think this is a move by the filmmakers to keep from spooking the audience by being too realistic).

There are a couple of problems with this technical tour de force, though. The main one I have is the same one that I have with many films. It is too darn long to sustain the story line. The makers, here, are so taken with the state-of-the-art technology that they feel they must sacrifice good pacing with extra F/X - action scenes are carried too long and the story meanders through its last 30 minutes with multiple logical endings, preventing the film from being tight and to the point. 15 minutes of judicious editing would have made this a terrific sci-fi adventure instead of just a good one.

The other problem is the melding of CGI with the look and feel of reality. We have entered the realm where the vid techies can create a realistic-looking human being by manipulating the bits and bytes. Giving voice to these new beings is going to create problems. It's one thing to have Charlton Heston doing the voice of a dog. It's another thing entirely giving that voice to a human, albeit a CGI one, that does not look like the actor. I found it distracting to hear Donald Sutherland's voice coming out of balding, bearded Dr. Sid. My mind kept visualizing the actor, instead. Non-stars and unknown vocal talents would be less distracting when giving voice to the characters in this reality-based animation world.

The real draw for "Final Fantasy: The Spirits Within" is to the many fans of the video game series (over 33 million copies sold world-wide) and those who are curious to see the first hyper-realistic, computer-generated action feature. It is a formidable effort, despite the problems