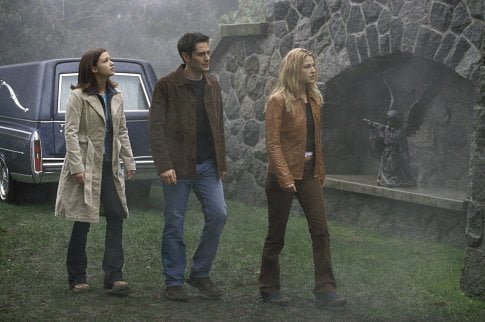 In "Final Destination," a high school teenager had a premonition that caused him to panic and disembark a plane full of fellow students with a few he managed to spook. Flight 180 exploded shortly after takeoff, but a vengeful, cheated death called upon all but one survivor. One year later to the day, Kimberly Corman (A.J. Cook, "The Virgin Suicides") has a vision of a horrific pileup while driving to Daytona with three friends in "Final Destination 2."

"Final Destination" was a cut above the standard teen horror flick, leading the pack of current films which examine luck and fate's relationships with death ("Unbreakable," "Intacto"), its premise obscuring its slasher film agenda of innovative death scenes. "Final Destination 2" follows the horror film sequel standard of going the tongue in cheek route and does so with aplomb - this film is a hoot.

Director David R. Ellis ("Homeward Bound II") quickly fills in his audience on the first film by opening with his heroine watching a talk show noting the anniversary of Flight 180 and its weird aftermath. Then he cuts to the chase. Kim's dad is anxious about his daughter's trip and he notes a foreboding red puddle in the driveway as she pulls away. Ellis builds tension piling one bad sign on top of another, all noted by Kim, until the inevitable occurs setting off a disastrous chain reaction on a busy highway. But wait! This was a premonition! Kim blocks traffic on an entrance ramp and the angry drivers behind her form the sequel's surviving meat.

The filmmaking team behind this surprisingly entertaining sequel fire on all cylinders until losing steam for the movie's drab finale. While humor is abundant, it doesn't detract from the genuine sense of foreboding that intros every set piece. The Rube Goldbergesque death scenes are inventive, each beginning with a magician's sleight of hand that draws our attention to an obvious danger before delivering another that's been there all along. Kudos to cinematographer Gary Capo and editor Eric A. Sears ("On the Line") for their contributions.

The screenplay uses the stodgy device of consulting a survivor from the original who is now ensconced in the looney bin (see "The Rage: Carrie 2," etc.) with winking self awareness. Clear Rivers (Ali Larter, "American Outlaws") is in a self-admitted padded cell to protect herself from harm, but is shamed into helping the highway hysterics by Kim. After some mumbo-jumbo about death working backwords, the 'ripple effect,' and a totally gratuitous visit to mortician William 'Bill' Bludworth (Tony Todd, "Final Destination") the group concludes that the birth of a survivor's baby will stop the reaper's reign.

"Final Destination 2" may not be best of genre, but in one five-minute dentist visit it offers more outrageous thrills than the Tooth Fairy did in all of "Darkness Falls." Where else have you seen a death scene that involved a leaking aquarium, a crane, pigeons, a mobile, a sheet of glass and nitrous oxide?

In 2000, a group of teenagers cheated the Grim Reaper when, after one of them has a premonition of doom, they debark from Flight 180 just before it explodes on takeoff. But, you can't bilk Death forever and, one by one, scores are settled until only one is left, Clear Rivers (Ali Larter). Now, voluntarily committed in a mental institute to protect herself from Death's hand, she is approached by Kimberly Corman (A.J. Cook), a young woman who also had a premonition of deadly proportions, to save a new group of survivors from the Reaper in "Final Destination 2."

On the anniversary of the Flight 180 explosion, Kimberly and her friends head off for a fun weekend down Route 32 when a logging truck dumps its load and causes a deadly pileup with a mounting body count, including Kimberly. Then, she finds herself stopped on the entrance ramp to the road, blocking the way for those behind her, the very people she just saw destroyed in the fiery crash. When one of the onramp survivors later meets with a bizarre demise, it becomes obvious that Death wants his due and it is a race against the clock as Kimberly, Clear and the rest try to stay their imminent execution.

I had the chance to watch the premier "Final Destination" again after seeing "FD2," for comparison. The 2000 hit is imaginative, often creepy and takes its horror movie genre very seriously, with some dark humor interspersed. The same production team reunites for the next installment under the direction of veteran second-unit helmer David R. Ellis and put aside the usual more-of-the-same sequelitis. Sure, "FD2" uses the same setup with the premonition of disaster, the rescue of a few from the clutches of Death and the Reaper's return to harvest those that he missed. But, this time the makers bring the black humor to the front and combine it with some outstanding production values that make the second "FD" a better, more entertaining extension of the first film.

The showcases for "Final Destination 2" are the numerous, cleverly thought out scenes where the onramp survivors are decimated one by one, like the Ten Little Indians. The opening accident sequence is a smorgasbord of explosions and mayhem as we are suckered in by the sheer audacity of crashes, bodies flying and metal rending in nonstop action that makes your jaw drop. Things happen fast and furious in the visual bombardment and the makers keep up the good work as Death goes a-huntin'.

When the first of the survivors, Evan Lewis (David Paetkau), meets the Reaper it is a comedy of errors that begin with the recent lottery winner carrying a new Mac computer up the stairs, across the hazards of a toy strewn hallway and into his single guy mess of an apartment. He tosses a container of Chinese leftovers into the microwave and a pile o' stuff, including cooking oil, into a frying pan (flame on high, of course) as he tries on his new gold watch and ring. The ring slips from his fingers and into the garbage disposal, which Evan obligingly tries to retrieve, as the microwave begins to spurt and the frying pan catches fire. At this point I'm having flashbacks of William Devane in "Rolling Thunder" as I am sure, when Evan's hand gets stuck in the disposal because of the watch, that he is going down the drain. Then, helmer Ellis and his talented and intelligently inventive crew hit you with a series of Death inspired mishaps that just keep on coming. The team of "FD2" keeps the energy and imagination flowing as Death takes out the other survivors one at a time in vivid, energetic detail.

The story, by J. Mackye Gruber, Eric Bress and Jeffrey Reddick (with the screenplay by Gruber and Bress), uses the first film as an outline and take the idea to wonderfully intricate levels. The build up after the explosive opening is handled with aplomb as the survivors become victims of Death, one by one. Each scene of mayhem is elaborately and elegantly set up with great attention to the details. The writers lead you down one path only to leap to another and back again as the Reaper calls in his markers. The sheer outrageousness of the scenes actually made me giggle with pleasure from beginning to end.

The production credits befit the intelligence of the writers' hugely entertaining story. Lenser Gary Capo captures the action crisply and vividly as Death takes his toll. The carefully orchestrated production design by Michael Bolton is exemplary as each set piece is executed. Eric Sears's fast cutting editing makes each of the action sequences work perfectly in building the tensions to a peak every time. Even the obviously campy and nonsensical ending is done with tongue-in-cheek vigor.

The acting befits the nature of the "Final Destination 2" and compliments the story's relentless dark comedy/horror flick. A.J. Cook, as Kimberly, is strident as the catalyst that sparks events with her premonitions of disaster and her fervent desire to cheat the Reaper. Ali Larter, as the cynical Clear who is determined to keep Death at a distance as long as possible, gives the smart-ass edge her character needs. The rest of the cast give their all to put life and dimension into their all too brief screen time.

"Final Destination 2" is, in a word, a hoot. At a time of year when the studios dump their, at best, mediocre works on the public, it is a pleasure to see something that amuses and entertains with its intelligent black comedy and high production values.