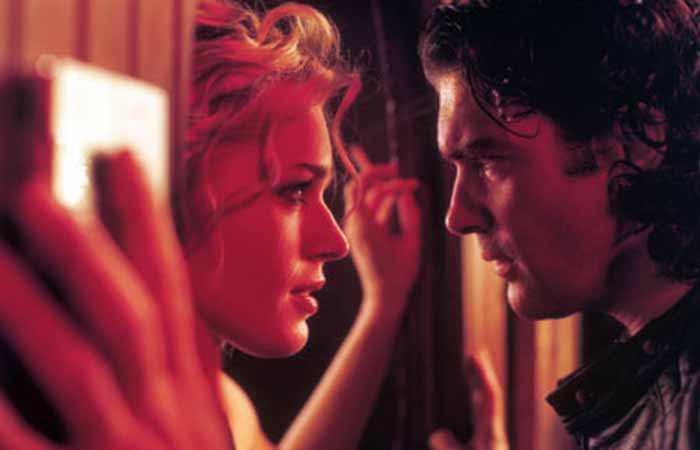 The Cannes International Film Festival is the backdrop for an ornate caper to steal a $10 million piece of diamond studded body jewelry being worn by a high priced fashion model attending the fest. Laure Ash (Rebecca Romijn-Stamos) seduces the scantily clad, bejeweled lady and, with her partners Black Tie (Eriq Ebouaney) and Racine (Edouard Montoute), they almost pull off the heist - until things go drastically wrong. Laure makes off with the loot and escapes to America with a new identity. Seven years later, Laure, now Lily, reluctantly returns to Paris, the wife of the US ambassador. When an ex-paparazzo, Nicolas Bardo (Antonio Banderas), secretly takes her picture, he unleashes a deadly pursuit by her vengeance-driven and thoroughly pissed off former partners in "Femme Fatale."

A sexy thief (Rebecca Romijn-Stamos, "X-Men") pulls off a diamond heist at the Cannes Film Festival, double-crossing her colleagues. Reappearing in France years later as the wife of a diplomat (Peter Coyote), Laure is photographed by down-on-his-luck paparazzo Nicolas (Antonio Banderas). Racked by guilt over the problems his picture's publication has caused the beauty, Nicolas tries to come to her aid, but instead he finds himself caught in the web of a conniving "Femme Fatale."

Writer/director Brian DePalma ("Mission to Mars") presents a trashy parody of his own films of the late 70's/early 80's ("Sisters," "Dressed to Kill," "Body Double") with an over the top homage to Hitchcock and himself that's entertaining in spite of a stilted performance from its lead. "Femme Fatale" is an exercise in cinematic excess whose faults almost add to its charms.

>From Romijm-Stamos' reflection on a television screen showing "Double Indemnity" to a Rashomon-like restaging of the film's climax, DePalma's "Femme Fatale" is drenched in filmic duality. After a cheesy but flashily edited opening sequence, involving a diamond encrusted breastplate and a lesbian encounter in a ladies' room, DePalma immediately begins to stretch coincidence beyond credulity by presenting Laure's double in the form of a suicidal woman whose parents have mistaken Laure for their daughter. Laure watches Lily, who's attired like Dorothy in the Wizard of Oz, blow her brains out, then steals her passport and airline ticket to step into a new life. She returns to France evoking Hitchcock heroines from Kim Novak to Grace Kelly and Tippi Hendren, all chiffon scarfed and frosted blonde fragility.

Forced by financial strain, Nicolas sells his stolen snap, then finds himself spying on Lily/Laure through a camera lens a la Jimmy Steward in "Rear Window." (Adding to the hilarity, De Palma frames Banderas with neon Sex Shop signs placed on either side of head.) Nicolas blusters his way into Lily's hotel room, posing as its former gay occupant, and finds a gun. Alarmed, he offers support to prevent her demise. 'If a man walks in, there doesn't have to be a bang,' he offers. In turn, Lily strips to her lacy white lingerie before first setting Nicolas up as her kidnapper as Lily, then her captive as Laure.

"Femme Fatale" suffers from overplotting in its midsection, but just when one's patience is beginning to be tested, De Palma delights with a finale that is as ridiculous as it is fulfilling. After fumbling around with recent misfires like "Mission to Mars" and "The Bonfire of the Vanities," De Palma's taken his titular 1972 advice - "Get to Know Your Rabbit."

Writer/director Brian De Palma has a great deal of tongue in cheek fun in his latest film of duality and wickedness as cold and calculating Laure rips off her partners and makes plans to get out of the country. As fortune has it, just as she is about to go on the lam, she is mistaken for another, a suicidal woman named Lily who recently suffered the loss of her beloved husband and daughter. Not one to let lay fallow any opportunity, Laura becomes Lily and takes off for the sanctuary of the good ole USA. On the plane, by chance, she meets wealthy Bruce Hewitt Watt, a self-made multi-millionaire who has gone into government service. They get married and all looks rosy for Laure/Lily.

Seven years later, Watt is made ambassador to France and they wing their way back to Paris where the secretive Laure/Lily must guard her true identity from her former colleagues. A wrench is thrown into the works when out of work celeb photographer Nicolas, to make a few bucks, snaps her picture. The reclusive wife of the high-level diplomat finds her face plastered around the city and Black Tie and Racine are quickly on her trail. Not a woman to be underestimated, Laure cooks up a plan to drag Nicolas into a kidnapping scheme to rip off her own husband for $10 million.

In typical De Palma fashion there are circles within circles and schemes within schemes as Laure uses anyone who will help her plans. She is cold, calculating and, self-admittedly, "rotten to the heart" as she manipulates Nicolas and Watt, but she can't escape her past life. Rebecca Romijn-Stamos, a former model turned actress, is perfect looking for the role an does a decent job as the cool, calculating and cruel Laure. It's a caricature of a character and De Palma's casting of the sultry looking Ramijn-Stamos is inspired. She may not be Meryl Streep but the seductive and sexy lesbian heist scene, with super model Rie Rasmussen, is near worth the price of admission - for guys, at least.

Antonio Banderas doesn't get to give much of a stretch as ex-paparazzo Nicolas Bardo but he seems to be having fun camping it up with his sexy costar. He may be billed first but he definitely plays it as second banana to Romijn-Stamos and this shows in his relaxed, often funny performance. Peter Coyote has the right looks and gives the proper poise to his character of Lily's naïve ambassador husband. Eriq Ebouaney, who made an interesting international debut as "Lumumba" is cast as the really ticked off boss man crook that wants Laure's hide nailed to a wall. Greg Henry is suitably cold as Watt's chief of security, Mr Shiff.

Techs are of a high level with such maestros as lenser Thierry Arbogast providing the film noir qualities of shadow and light while giving the film the energetic, fluidly moving camera that reps the modern look it also takes on. Slick production design by Anne Pritchard utilizes the Paris locales well. Japan's answer to John Williams, Ryuichi Sakamoto does a passable job of emulating Hitchcock's musical mainstay Bernard Herrmann with an edgy "Psycho" like score and a confused rendition of a piece, over the opening caper, that has the sexual overtones of Ravel's "Bolero."

I can imagine some of the advert blurbs proclaiming "Femme Fatale" as the best of De Palma. It's not but it is a hoot of a film by a craftsman with a sense of humor and an eye for naked, pretty young women, something that I don't mind at all.