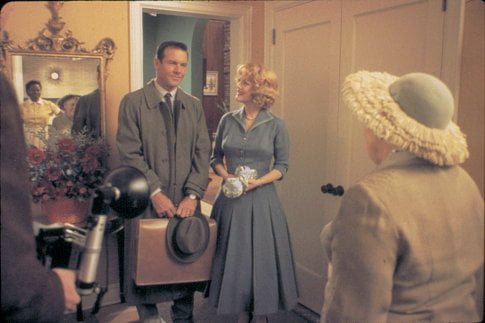 When happy housewife Cathy (Moore) discovers her ad exec husband (Dennis Quaid in a 180 from his "The Rookie" role) in a clinch with another man, she tries to save their sexless marriage via counselling, but finds herself drifting into a relationship with her black gardener (Dennis Haysbert). Suddenly Hartford's perfect hostess is the subject of a scandal that even her best friend (Patricia Clarkson) recoils from in writer/director Todd Haynes' ode to Douglas Sirk and actress Julianne Moore, "Far From Heaven."

Haynes ("Safe," "Velvet Goldmine") walks a fine line in his exploration of 1950's American sexual and racial discrimination and repression, reviving the melodrama to the very edge of camp, yet attaining a real emotional wallop. Haynes has achieved perfection in every aspect of filmmaking here, displaying a confident maturity far beyond his earlier works. His homage to such films as "All That Heaven Allows" and "Imitation of Life" transcends them. Simply put, "Far From Heaven" is a masterpiece.

Cathy's first warning that her world is not what it seems comes when Frank fails to appear in time for a dinner engagement. Called to the phone by their maid Sybil (Viola Davis, "Traffic"), Cathy is shocked, but rises to the task of having to bail her husband out of jail. She believes his explanations and the very next morning is presenting her household to Mrs. Leacock (Bette Henritze), Hartford's society columnist. Distracted by a stranger in her yard, Cathy meets Raymond (Dennis Haysbert, "Love and Basketball"), the son of her former gardener, with a warmth that's noted in Leacock's article, much to the amusement of Cathy's circle. Cathy, it appears, is viewed as a bit of a liberal. 'I'm not prejudiced, we support the NAACP,' says she.

Indulgent affection begins to sour at a local art show when Cathy greets Raymond and his young daughter like old friends. Yet Cathy's annual party, prepared with the help of best friend Eleanor (Patricia Clarkson, "The Pledge"), is still a success, albeit one where marital cracks begin to show publicly when a drunken Frank embarrasses his wife.

Raymond discovers Cathy distraught at her home shortly afterwards and he talks her into a refreshing outing, but they're seen entering a restaurant by town gossip Mona Lauder (Celia Weston, "In the Bedroom"). Frank's relieved to be on the offensive for once and Cathy tries to resuscitate the marriage with a New Year's trip to Miami, but once there a young man breaks Frank's resolve and wins his heart. Cathy's confides her feelings about Raymond to Eleanor and is shocked to find herself rebuffed.

Haynes complex script encompasses the strata of an entire society in a specific time and place. Housewives twitter over the unseemliness of a husband who wants sex more than once a week. Doctors discussing the 'disease' of homosexuality list shock treatment as an option. Children are admonished to watch their language after uttering 'Jeez.' Perfectly made up women outfitted in heels and pearls deliver elaborate silver serving pieces for their friends' soirees. A little girl is pummeled with stones by a group of little boys simply because she's black.

This is a world where what is unsaid is often louder than the spoken word. Haynes realizes this most powerfully when Cathy goes to Raymond's house and Raymond 'consummates' the unrequited love affair by running his thumb throughout the center of a pink rose.

Moore is perfection as the idealistic woman whose perfect world crumbles. The transformation of her smiling kind face into a mask of disillusionment by film's end is heartbreaking. Haysbert is the essence of gentility. His quiet, educated manner and decency make him the ideal match for Moore's Cathy, although he's played this part before with Michelle Pfeiffer in "Love Field." Quaid captures the 1950's businessman, showing his chinks by slipping in subtle effeminate touches. He remains sympathetic with displays of sincere confusion and anguish. Clarkson is once again top notch, here as an elegant country club gal. Davis provides a stabilizing influence on the Whitakers' turbulent household. Henritze is a real find as Leacock.

Mark Friedberg's ("Pollock") autumnal production design and Sandy Powell's ("The End of the Affair") color-coded costuming are magnificently lush and evoke not only the period, but the filmmaking of the period. Cinematographer Ed Lachman's stylistic framing also recalls Sirk's era, mostly amusingly when rear projection is used for vehicle exteriors. Composer Elmer Bernstein's ("The Age of Innocence") score is another vintage touch.

"Far From Heaven" is cinematic paradise.

During the 50's director Douglas Sirk made his name as the master of melodrama with such classics as "Written on the Wind" and "Imitation of Life," as he examined romantic relations and intrigues that showcased leading man Rock Hudson. In what can only be called heartfelt homage, writer/director Todd Haynes captures the interpersonal angst of Sirk and updates it to the new millennium in "Far From Heaven."

Sirk propelled Rock Hudson to movie icon status as a regular player in many of the director's popular flicks using, I think, the actor's secret sexual preference to create characters that had a certain ambiguity about them. With "Far From Heaven" writer/helmer Todd Haynes seems to be doing the same for Julianne Moore. This is the second film that Haynes and Moore have worked together, the first being "Safe," and in this latest collaboration we see a professional relationship that may not be so far from heaven.

Moore plays Cathy Whitaker, an upper middle class housewife who tends to her beautiful home in Hartford, Connecticut for her hard-working TV sales exec husband, Frank (Dennis Quaid), and her two young kids. Life is idyllic with Cathy able to demonstrate her liberal attitudes and voice her mind on the time's civil rights issues. She is startled one day, though, when she sees a stranger, a black man, looking around her yard. She soon learns that he is the son of her gardener who has recently died and the son, Raymond Deagan (Dennis Haysbert), the owner of a gardening business, has taken over for his late dad. A friendship soon blooms between the two.

Cathy takes for granted that husband Frank is, as usual, working overtime when he's late for a dinner party or drunkenly abuses her verbally in front of friends. But his increasingly surly behavior isn't because he is working long hours. It's because Frank has doubts about his sexual orientation. When Cathy decides to drop off dinner at the office one evening when Frank is working late she catches him in the arms of a man! Suddenly, the solid foundation of her marriage and life starts showing some pretty significant cracks. Frank breaks down and promises to go into therapy then takes her on a vacation, just themselves and no kids, to Miami. Of course, we the audience see that Frank isn't cured of his homosexual sickness. Not by a long shot. Cathy's life, as she has known it, is quickly falling apart.

Controversial filmmaker Haynes, considered by some as a leader in queer cinema, has never drawn back from producing provocative films such as "Superstar: The Karen Carpenter Story," his three-part AIDS allegory "Poison" and his first Julianne Moore vehicle, "Safe." Throughout his career his gay-themed works have always garnered interest, debate and a solid following. But these films have been a learning experience for the writer/director leading up to his latest, most fully drawn effort in "Far From Heaven." Haynes has transcended his previous works in what can be considered a masterpiece of modern cinema that reps the maturing of an artist into world-class filmmaker.

Haynes shows an incredibly detailed understanding of the films by Douglas Sirk, taking the ambiguity that the social mores of the 50's required of such filmmakers and opening it up in an honest, sometimes painful way through his central character, Cathy. Instead of leaving such controversies as racial prejudice and homosexuality in the closet, so to speak, writer Haynes lays them bare for our examination. "Far From Heaven" starts out light and perky as Cathy leads her perfect, liberal life with her perfect husband and kids. She sees nothing wrong as her friendship with Raymond blossoms but there are storm clouds gathering on the horizon as personal and public events unfold.

Cathy's heartfelt feelings for good and kind Raymond, as innocent and chaste as they are, represent a threat to her white bread society. When they are seen together visiting a black-owned restaurant and bar by Hartford's foremost gossip, Cathy's secure life begins to fall apart. Her shocked discovery of husband Frank's alternative lifestyle furthers the breakdown in her life and we watch the always pleasant Cathy begin to lose the security that she had taken for granted.

Julianne Moore gives her best performance to date as she gives dimension and feeling to Cathy. You understand and respect her liberal feelings, but the society of the day decidedly does not. This realization shatters her images of what her life really is. There is no turning back for Cathy as the die has been cast and the ugliness of prejudice, rumor mongering and malicious gossip shape her future. Moore performs brilliantly.

Her costars also give full-fledged measure to their individual roles. Dennis Haysbert (a superb though underutilized acting talent) makes Raymond a believable, likable and very human character. He sees the warmth and love that emanate from Cathy's heart and soul and offers her the friendship and respect she deserves. Haysbert establishes Raymond as a gentle and kindred spirit who struggles against the stigma that white society has placed upon him and his people - keep in mind that the period of the film precedes the upheaval of the civil rights movement that the country would soon face.

Dennis Quaid, who has made a career as a handsome ladies' man, departs from his usual persona and delves into the desire and guilt that make up Frank Whitaker's life. He is honestly ashamed of what he is doing to his marriage and tries to make things right for his wife and partner, Cathy, but his unrequited desires take hold and he, quite literally for the time, seeks love in all the wrong places. It's a tough, unsympathetic role but Quaid gives his all.

The rest of the supporting cast also help give depth to the characters of "Far From Heaven" with Patricia Clarkson noteworthy as Cathy's best friend Eleanor Fine. Eleanor fervently declares that she is Cathy's "dearest and closest friend," but shows her true colors as the story, and Cathy's plight, unfolds. Viola Davis, as the Whitaker family maid, comes across as both a loyal friend to Cathy and a member of the family. Bette Henritze, as Hartford gossip columnist Mrs. Leacock, is dead on as the ever-present eyes and ears of the town's white community.

Acting, alone, does not always make a film great (though it does not hurt) and first class production values also contribute to a film's overall quality. The behind the camera crew that Haynes gathers provides exemplary craftsmanship to "Far From Heaven." Lenser Edward Lachman provides high quality camera work that equals the onscreen talent. Production design and art direction, by Mark Friedberg and Peter Rogness respectively, help create the mood and tone that are the film's period hallmark. Costume design, by Sandy Powell, is brilliant, especially in clothing the star, Moore, in a series of fashionable dresses that smack of the 50's. Think of June Cleaver in color and with a big budget.

"Far From Heaven" is as near perfect a film that has graced the big screen this year and richly deserves all the attention it should garner come year's end. Rarely does there come along a movie of such quality on so many levels.