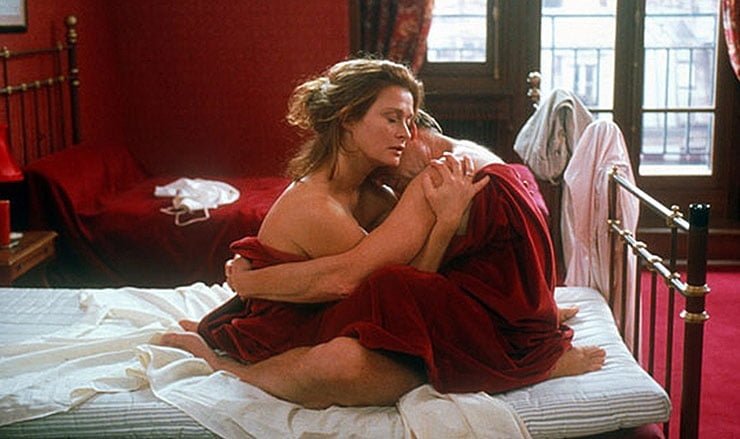 When Marianne (Lena Endre, "Kristin Lavransdotter") takes her and her husband's best friend David (Krister Henriksson) as a lover, she never anticipates the tragic events which will follow in writer Ingmar Bergman and director Liv Ullmann's "Faithless."

On a remote island, a writer named Bergman (Erland Josephson, "Scenes From a Marriage") sifts through the contents of a desk drawer, trying to draw inspiration from memories. (Bergman purportedly wrote this script based on an incident from earlier in his life that's continued to haunt him, although he gave Ullmann complete control over the film.) Marianne comes to him and begins to recount her painful story under his gentle prodding.

Marianne is a successful actress with a happy marriage to a world-reknowned composer/conducter Markus (Thomas Hanzon, "Private Confessions"). They have a 9 year old daughter Isabelle (Michelle Gylemo). Their friend, David, a film director with a messy life, frequently joins them for dinner and acts as an uncle to their daughter. When Marianne encounters David drunk and distraught one day, she brings him home. He suggests they sleep together. She laughs it off, proclaiming their relationship like that of brother and sister, but the idea takes root. Marianne, who's won a scholarship to study in Paris while Markus is away on a U.S. tour, talks David into a 'happenstance' meeting on the continent.

Trouble rears its head almost immediately, when Marianne discovers David's childish behavior coupled with intense jealousy. When an initial incident is smoothed over, their emotional bond becomes stronger - what Marianne had convinced herself she was doing for 'fun' has become hurtful. When she leaves their Parisian hotel room, David pulls a red bedspread over his head and Ullman cuts to Isabelle with a white and red bedspread over her head. This connects David to the child as well as pointing out Isabelle as the next victim of Marianne's hurt.

Marianne can't keep herself from David when they return. As his actors in 'A Dream Play' rebel, a distraught David asks Marianne to 'come look at your idiot,' appealing to her vanity. Markus discovers the lovers and promises Marianne he will make her hurt, demanding custody of Isabelle. That's just the beginning of the hellish descent Marianne continues to agonize over with Bergman, accusing him of laziness while allowing her, an actress, to shape his drama out of her real memories.

This bleak and talky Swedish drama is like watching a train wreck. Lena Endre's expressive face (beautifully lit by cinematographer Jorgen Persson, "Smilla's Sense of Snow") keeps our attention whether she's telling her story or admidst the action of flashback. Ullmann's deliberate pacing allows a sickening, gut-wrenching sense of dread to build. Her staging of Bergman and Marianne suggest a mentor/student relationship which flows in both directions. Again she uses duality as she shows Marianne and her reflection in a mirror, suddenly separated by the ghostly appearance of Isabelle. Ullmann's direction is strong although Bergman's presence is always evident. Lena Endre's performance is devastating.

"Faithless" is an open wound of a film, yet its humanity brings a heartfelt message. When Marianne tells Bergman that talking about love is painful, one can't help but think that this film will make it far more difficult to ever take love for granted.

Legendary filmmaker Ingmar Bergman gets introspective with his autobiographical story of marriage, infidelity and betrayal, "Faithless," directed by his protigi, actress-turned-director Liv Ullmann and starring Lena Endre as the fickle Marianne.

The story begins with an old man, Bergman (Erland Josephson), struggling with his script about marriage and fidelity. He has trouble breathing life into his personal tale and calls upon an actress, Marianne (Endre), to help him with the task. The beautiful actress may be real or she may be just a figment of the elderly Bergman's imagination as she helps the writer and tells him her story.

Marianne is married to Marcus (Thomas Hanzon), a much sought after orchestra director who spends much of the time away on tour. David (Krister Henriksson), a family friend and filmmaker (Bergman's alter ego), decides to fill the void and spends his time with Marianne. An affair soon begins. David's hair trigger temper and lack of regard for those around him are the catalyst that will lead to a broken marriage and, especially, grief for Marianne and Marcus's young daughter Isabelle (Michelle Gylemo)

Ingmar Bergman is known for his moody, reflective work as both director and writer and "Faithless" is no exception. His story of infidelity and jealous starts off innocently enough with Marianne reacting to an offhanded proposition by drunken David with a declaration that they are like brother and sister, rebuffing the advance. Thinking it all a bit of platonic flirting, she begins to plan an affair that lands her in Paris with David while Marcus is, again, on tour. As the passion builds so does her realization that David is selfish, demanding and doesn't really care about anyone but himself. Things come to a head when Marcus catches his wife and best friend in bed. The cuckolded husband vows to get a divorce and take the one thing away from Marianne that means anything to her - Isabelle.

This long, talky Swedish language film benefits from several levels of influence. Bergman's biographic tale takes on the proportions of an accident happening before your eyes - you know, as you watch, that there is a whole bunch off hurt coming up, but it's too fascinating to turn away from. You know that Marianne's decision is going to cause pain for her, Marcus and, especially, Isabelle, but she can't stop it from happening any more than you can stop her. Your fears, you realize, are going to be met by the little family and disaster is apparent.

The fascinating drama of jealousy and betrayal is coupled with some exemplary acting, especially by Lena Endre. The Bergman-favored actress gives an enigmatic air to Marianne as she moves from innocent playfulness to a full-blown affair and damn the consequences. Marianne is beautiful enough to believe that she can control the flirting between her and David. When they go to Paris, leaving Isabelle with her grandma and Marcus touring the wilds of America, it is still under the misguided belief that there is nothing wrong in what they are doing. When David ingenuously asks about her past affairs, she doesn't see the horns of jealousy sprout. When their affair ends in anger and confrontation with Marcus, she also doesn't see that she is going to lose Isabelle, too. Endre gives a powerful, subtle performance as a woman who makes an irreversible decision and must suffer the consequences.

The men in her life are more mundane than Marianne. Each is well regarded in their respective fields - Marcus and music, David and film - but they are emotionally stilted. They understand that they both love Marianne, but neither knows the woman or her needs. In the end, everyone loses, with little Isabelle being the most profoundly affected victim of the adult decisions. Endre anchors the rest of the small cast.

Liv Ullmann lends an assured hand to her direction, showing the inspiration acquired from her mentor, Bergman. She is influenced, strongly, by the elder director, but has developed her own intimate filmmaking stance. "Faithless," actually feels more French than Swedish, the interlude in Paris notwithstanding. The close, almost stagy production plays it close to the chest as the intimacy approaches claustrophobic as Marianne's once happy life goes down the tubes.

"Faithless" is the kind of film that the buffs love, but is far too dialogue intensive to attract the more casual filmgoer.