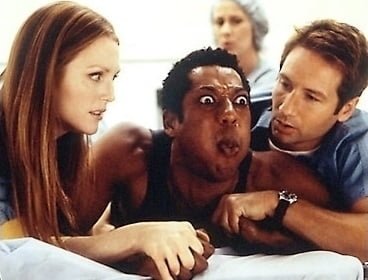 What if life on Earth did NOT come out of the primordial ooze hundreds of millions of years ago? What if the building blocks of life came from deep outer space instead? And, what if the first struggling cells needed only days to evolve into full-blown monsters? This is the premise for Ivan Reitman's latest goofball comedy starring David Duchovny, Orlando Jones and two-time Oscar nominee Julianne Moore in "Evolution."

Glen Canyon Community College's biology students are thrilled to be getting A's from their disillusioned professor, Dr. Ira Kane (David Duchovny). (Unbeknownst to all, Kane's a former Army scientist, fired and disgraced over an experimental anthrax vaccine he administered to troops with dire results.) When Kane's friend and colleague, geology professor and women's volleyball coach Harry Block (Orlando Jones, "The Replacements") gets called to investigate a meteor crash site, Kane goes along for the ride. Kane begins to smell a nobel when he finds ooze coming from the meteor. Twenty-four hours later, though, what they have on their hands is a serious case of extraterrestrial "Evolution."

Three writers (David Diamond & David Weissman and Don Jakoby) are creditted with coming up with this unfunny, totally unoriginal piece of screen fodder which creates a danger that pits the military against our inept heroes in their efforts to overcome it. The special effects team, led by Phil Tippett ("Jurassic Park," "Starship Troopers"), provide a bunch of creatures ripped right out of director Reitman's overrated "Ghostbusters."

"Evolution" is made almost tolerable by the easy chemistry between stars Duchovny and Jones, a terrific pairing of funny guys with very different styles in search of a funny script. Julianne Moore, however, should be ashamed of herself for playing a character who's supposed to be funny because she falls down and walks into doors a lot. Seann William Scott ("Road Trip") is a third wheel aspiring fireman dumbell who exists to be made fun of. Ethan Suplee, so fine in the recent "Blow," does stupid fat schtick as one of Kane's students.

Director Reitman, creditted by star Jones as "one of the great comedy directors of all time" in the press notes, has made exactly one good movie ("Dave") and a few semi-amusing ones ("Stripes," "Meatballs," "Ghostbusters") largely due to the talents of the likes of Kevin Kline and Bill Murray. "Evolution" bottom feeds with his "Legal Eagles," "Twins" and "Junior" oeuvre.

The film's insulting climax features our mismatched team of misfits underneath what looks like a painted dropcloth (it's supposed to be the underbelly of an alien) to insert a product placement enema via firehose. Enough said.

Just watching the first promotional bits, over the past couple of months, for "Evolution," I was taken by the obvious parallels to Reitman's 1984 smash hit, "Ghostbusters." What saved that mostly silly movie was a performance by Bill Murray that capitalized on the actor's comedic talent and sarcastic wit. Unfortunately, "Evolution" does not have Bill Murray, nor anyone approaching his one-man-show talent, to bear the burden of a mediocre comedy that has its requisite special F/X, but little humor in its routine sci-fi tale.

A mysterious object crashes into the Earth. A team of scientists investigates. The object not only turns out to carry living organisms, they're hostile to humans and growing in number - fast. It's up to the intrepid team of buffoons to stop the alien invasion before the Earth is lost. This formula has worked well for decades, since "The Thing" (1951) and "War of the Worlds" (1954), and screenwriters David Diamond, David Weissman and Don Jakoby, dust it off one more time for "Evolution." This time, though, the alien invasion is played for laughs. Well, some laughs, anyway.

The problem with "Evolution" stems from trying to force the comedy into the original sci-fi drama developed by Don Jakoby. Unlike "Ghostbusters," which came from years of comic ghost stories like "The Ghost Breakers" (1940) and "Ghost Catchers" (1944), "Evolution" spawned from more serious fare. This is a problem as the film tries to force humor into scenes that borrow from flicks like "Alien" and "Tremors." The cast does its best to inject comedy into the scenes, but it is hard work and forced.

David Duchovny and Orlando Jones do yeomen's work as a pair of junior college professors who see the discovery of the alien object - a meteor that seeps slime - as their ticket to the big times. When Ira Kane (Duchovny) and Harry Block (Jones) take the sample of ooze back to their lab, Ira discovers it contains single-celled organisms from outer space! Even more exciting is the fact that they reproduce at a fantastic rate!

When they take some students on a field trip to the site - an underground cavern the rock crashed into - they discover that, in few hours, the single-celled creatures had evolved into mushrooms and mitosis-reproducing flatworms. Visions of Nobel prizes dance in the scientist's heads. That is, until the military, led by Ira's old boss, General Woodman (Ted Levine), takes over the operation. Little do they all know that the alien invader is developing at a rate where millions of years of evolution takes only hours.

The flatworms eventually become dinosaur-like creatures and, soon, the first primates evolve. As the flora and fauna from another world adapt to Earth's atmosphere it becomes apparent that, at their rate of evolution, they will completely take over the world in a matter of months. Of course, the military blunders big when the general decides to burn the creatures to hell - the exact wrong thing to do. It's up to Ira and Harry, with a little help from CDC investigator Allison Reed (Julianne Moore) and firefighter wannabee Wayne (Seann William Scott), to stop the spread of alien varmints and save the world - with Head & Shoulders shampoo, no less.

As I think about it, this really is a serious sci-fi story (except for the shampoo bit). It doesn't lend itself to comedy, which is why, I guess, there are so few laughs. Most of the humor is geared to the slapstick, with lots of set scenes of human confronting alien - much like "Ghostbusters." Duchovny plays it all tongue-in-cheek, with the required poke at his "The X-Files" past. Orlando Jones gets some mileage out of his oppressed (but not, really) black man. Julianne Moore - what was she thinking when she took this role - does numerous pratfalls and klutzy stuff, most of which is not funny and almost embarrassing for the twice-nominated Oscar contender. Seann William Scott ("Road Trip," "Dude, Where's My Car?") is locked into playing the doofus, yet again, adding nothing to the proceeds. Ted Levine plays the inept, overbearing general in a cookie cutter perf.

F/X are adequate but not outstanding. The film seemed murky and audio was poor at times, but this may have been the product of the theater projector and not the film.

"Evolution," I'm afraid, is the kind of comedy flick that exemplifies our summer movie entertainment. It's a popcorn flick that uses toilet humor, anus jokes and lots of slime that will entertain the younger audiences. It leaves me craving more intelligent fare - like "Shrek."