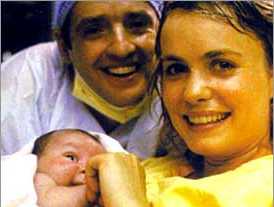 Expecting mothers are like members of a tribe, living in their own world and gaining strength from each other during their physically challenging pregnancies. When Angie (Radha Mitchell) and Russ (Justin Louis) have their baby all their friends gather around to support them during this joyous time. Then, tragedy strikes and baby Gabriel becomes the victim of Sudden Infant Death Syndrome (SIDS). At a time when Angie needs the support of her friends the most, she finds herself alone and abandoned by them in "Everything Put Together."

Angie (Radha Mitchell, "High Art") and Russ (Justin Louis) enjoy a middle class life surrounded by friends all in various stages of starting families. When they lose their firstborn, Gabriel, to SIDS (Sudden Infant Death Syndrome) suddenly Angie's friends don't know how to relate to her and she faces isolated grief in "Everything Put Together."

Written by Adam Forgash, Catherine Lloyd Burns and director Marc Forster, "Everything Put Together" is a compelling study of not just one young mother, but the society which surrounds her. Artistically the film is well done, but the 1/2 million dollar budget is apparent in amateur technical work.

The film begins with a group of expectant mothers in a locker room after swim class. Barbie (Megan Mullally, TV's "Will & Grace") talks about her son's upcoming birthday party. Judith (Catherine Lloyd Burns, TV's "Malcolm in the Middle") notes the strangeness that those born of their mothers evolve to become mothers. When Judith's water breaks, Angie's the only one still within earshot and she saves the day. When the group reconvenes at that birthday party, a grateful Judith asks Angie to be her child's godmother. This group seems more supportive of Angie than her own mother (Judy Geeson), revealed as a most unmaternal career woman through a series of odd phone calls.

On the way home Angie has a strange premonition (in a shot which should have been repeated later in the film), but she crushes it. She interrogates Dr. Reiner (a humorous Matt Malloy, "The Anniversary Party"), but he assures her everything is normal, yet it's Dr. Reiner who comes and pulls Russ from the post-birth celebration in Angie's hospital room to deliver unbearable news. Judith and Barbie make noises about giving Angie time, but it's clear they're covering their own discomfort. Accidental meetings are awkward. When Angie enters Judith's house unannounced and cuddles her godchild, Judith discovers her and freaks out. Distance and discomfort are transformed into a tribal shunning.

This intriguing original screenplay explores Angie's jagged mental state, exacerbated by an isolation which recalls Todd Hayne's "Safe" and a communal disintegration which suggests "The Stepford Wives." Roberto Schaeffer's digital video camera is artfully placed, but the images are tainted by auto focus corrections, subpar lighting and the shadows of crew members.

Performances are good across the board with Radha Mitchell ably carrying the bulk of the film. Burns and Mullally are queasily shallow. Justin Louis is solid as the loyal husband disgusted by the actions of friends yet powerless to save his wife. Mark Boone Junior ("Memento"), as Judith's toady husband Bill, has a good scene cutting off Russ with a load of transparent rationalization.

"Everything Put Together" does put everything back together in the end, and manages to horrify us in the process.

Angie's world should have been one of learning the wonders of being a mommy. But, instead of feeding schedules, changing diapers and nap times, she gets the rug pulled from beneath her when the unexpected happens and her baby boy dies. Husband Russ does his best to aid and abet his stricken wife in this time of heartbreak but he is a stranger in a strange land and cannot help alleviate her grief. Her friends, in various stages of family themselves, tell each other that it is best to give Angie some space and time to cope with her loss. But, their motivation is purely selfish and they just don't want to disrupt their own happy lives trying to help the grieving woman.

Radha Mitchell provides a riveting character study as the deeply troubled Angie. She puts an arc on her performance as Angie, first, enjoys the pleasure (and even the pain) of bearing her baby. In one sequence, just after the birth of her son, she reaches up to touch the face of her doctor in a warm and heartfelt manner that looks and feels natural. Her bubble is burst only a day later when the doctor draws Russ aside to break the news of the baby's death. As Angie watches (and we watch her) realization dawns and the horror and loss is overwhelming.

The bulk of the drama follows Angie as she unsuccessfully attempts to cope with her loss. All she really needs is a sympathetic, understanding shoulder to cry on but her friends abandon her at her most vulnerable time. Her mother, who should be a source of solace, is a busy, busy, busy business lady who has no time for her daughter and Angie can't bring herself to break the bad news to her own mom. The fast, steady decline that plagues Angie is on a course for real disaster until an accident brings her back to reality and life once again. The story says a great deal about loyalty, the value of true friendship and the understanding for a friend in need.

"Everything Put Together" reps an odd mixture of good acting, especially by Mitchell who anchors the film, an interesting story by helmer Marc Forster, Adam Forgash and Catherine Lloyd Burns and some very amateur-looking techs. Shot on video, there are problems with automated camera adjustments, bad audio and obvious shadows made by the crew moving around the set. The intelligence of the story (if a bit black and white) and the talented actors help to overcome these tech faults. The tragedy of SIDS is described in a way that is informative (and shocking ? more infants die of the syndrome than by cancer, heart disease, pneumonia, child abuse, AIDS, cystic fibrosis and muscular dystrophy combined) without being preachy.

Surrounding Mitchell is a crew of talented actors who fill out their symbolic characters well. Megan Mullally and Catherine Lloyd Burns are solid as sister preggers who turn their backs on the desperate Angie. The guys in the film are mainly just background fodder, although Matt Malloy gives a believable, touching performance as Dr. Reiner who pulls her through the miracle of birth only to be the one who has to break the bad news to her and Russ.

The good artistic qualities of "Everything Put Together" far outweigh the poor technical aspects of the film. High marks to Forster and Mitchell (who also co-produced) for creating an interesting and gripping drama.