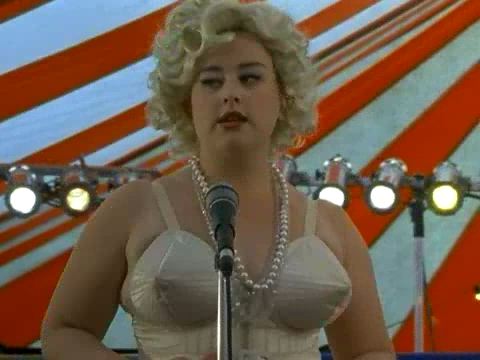 Jean Vereechen (Josse De Pauw) is a blue collar man who spends his weekends cheering on his daughter Marva (Eva Van Der Gucht) in talent competitions which she never comes close to winning.  Blind to her lack of talent, Jean pathetically tries to create the hit song that will make her a star.  When Jean runs into real star singer, Debbie (Thekla Reuten), he concocts a wild kidnapping scheme which will change their lives in Dominique Deruddere's Belgian Foreign Language Oscar nominee, "Everybody's Famous!"

"Everybody's Famous!" is a good-hearted crowd-pleaser along the lines of films like "The Full Monty." While it won't be mistaken for art, it's an assured piece of entertainment that goes down easy.

Josse De Pauw's Jean has a cinematic twin in Michael Caton's Darryl Kerrigan of the 1997 Australian film, "The Castle." Similar in appearance, they're both devoted family men who remain optimistic in the face of relentless obstacles and possess either the courage (or madness) to buck
the system.

Jean's daughter Marva does have a singing voice - she's just trapped in an overweight body (which may be the result of those Belgian waffle with whipped cream breakfasts dad lovingly prepares). Marva knows people judge by appearances, so she puts up an emotional wall which in turn makes her singing delivery flat and atonal. We know Jean's faith in her isn't completely misguided when we're privy to a children's puppet show - hidden from an audience which accepts her anyway, Marva's voice rings out clear as a bell. Yet, Marva's a teenager and her dad's cheerleading annoys
her. She sulks while long suffering mom Chantal (Gert Portael) rolls her eyes.

Jean gets his encouragement from his buddy and coworker Willy (Werner de Smedt), a young naive guy who admires Jean's songwriting (Jean la-la-las into a tape recorder, then verbally describes the trumpet flourishes and guitar strums which will embellish his latest masterpiece). The two are laid off from their factory jobs and Jean desperately tries to keep up a charade for his family. When the popular singer known simply as Debbie (Thekla Reuten) crosses paths with Jean, he impulsively knocks her out and persuades Willy to join him in a kidnapping scheme.

Jean arranges to meet with Debbie's manager Michael (Victor Low, a Terry Gilliam lookalike), hilariously outfitted in a Michael Jackson mask.  Michael manages to keep a straight face as Jean asks him to produce his 'song' and interview the perfect singer to make it a number one hit.
Michael, who's elated at Debbie's skyrocketting record sales since the kidnapping, has his own agenda. Meanwhile, Debbie, who hasn't had sex in two years, is finding Willy to be a pretty nice guy.

Deruddere juggles his plot threads dexterously, keeping his film moving along at a jaunty pace that's punctuated with various celebrity impersonator performances (Marva's seen having a go at Madonna while an Otis Redding imitator (Hein Sienkiewicz) is truly impressive). The bright production and costume design are fun while also being realistic (Jean's series of pink and teal shirts are particularly amusing). Jean's song for Marva, "Lucky Manuelo," is a plausible quick production while also sounding like a potentially radio-friendly piece of Euro-pop and van der Gucht's performance of it at the film's climax is a delight.

While Deruddere's professed intent to make a statement regarding current society's overwhelming aspirations to fame and fortune is only superficially hinted at (most notably in the film's closing joke as end credits roll), "Everybody's Famous!" succeeds as a sunny and sentimental family comedy.