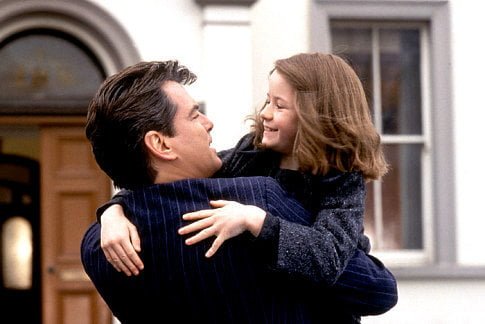 Desmond Doyle (Pierce Brosnan) is an out-of-work carpenter and craftsman struggling to raise his kids in 1953 Ireland. One day, his wife suddenly packs her bags and abandons Des and their three young children and the unemployed father finds himself the object of scrutiny by the state. With no regular income and his wife gone, Doyle is subjected to the tenets of the Children's Act of 1941 and his kids are taken away to an orphanage. But, Desmond won't give up his beloved children and he fights to change the law of the land in the based-on-true-events story, "Evelyn."

On St. Stephens' Day 1953, out of work Dubliner Desmond Doyle (Pierce Brosnan, "Die Another Day") is devastated to learn that his wife has left him and their three young children. Although Doyle manages to eke out a living working two jobs, the Irish authorities nonetheless force the man to place his children in Catholic orphanages. Determined to get his children back, Doyle procures a lawyer through the lovely bartender who's caught his fancy, Bernadette (Julianna Margulies, "Ghost Ship"), but when he gives up hope Doyle finds himself indebted to his rival, Nick (Aidan Quinn, "Michael Collins"), who's willing to take the case to the Supreme Court in Bruce Beresford's "Evelyn."

"Evelyn" is one of those 'based on a true story' uplifting underdog tales that threatens to drown the audience in treacle, but screenwriter Paul Pender and director Beresford offset the kiddies' plight with enough matey jockeying jocularity among the male cast to retain an even keel. Young Sophie Vavasseur ("Reign of Fire") is also a tremendous plus as Evelyn, the nine year old who represents the children's point of view.

As Desmond drowns his troubles in the local pub, he notices a Yank voice and sees Nick with his lawyer Michael (Stephen Rea, "Michael Collins"). Nick appears to be wooing Bernadette, Michael's sister. When Michael runs out of ideas after Desmond loses his case, Nick takes it on and brings them to meet Thomas Connolly (Alan Bates, "The Mothman Prophecies"), a retired familial law specialist and famous rugby player. Connolly agrees to help and comes up with the idea of challenging the law as being unconstitutional.

Pender balances the trials of Catholic orphanage life by using three nuns to represent the blacks and whites. Sister Brigid (Andrea Irvine) is the frustrated Bride of Christ who secretly beats the children and forces them to sleep like corpses, as 'lying on your stomach tempts the devil.' Sister Felicity (Karen Ardiff, "This Is My Father") is kindness and goodness personified and Sister Theresa (Marian Quinn) is the fair but stern authoritarian. Familial ties are shown through three generations, as Desmond is given unflagging support from his dad, who also teaches granddaughter Evelyn that shafts of sunlight are angel rays sent to protect. Both Frigid Brigid and those angel rays make important appearances in the courtroom when Evelyn is called upon to testify. The shadow of Desmond's wife is felt by the presence of her mother, who creates obstacles for Desmond while sparring with his dad.

The film is at its best, though, when it keeps male company. Connolly's character is mischievous and his past as a sports star is woven into the media coverage of the trial. Desmond and Nick maintain friendship while vying for the same woman. Doyle and his lawyers are used as an early example of utilizing the media to court public sympathy. Bernadette's constant harping at Desmond to give up the drink paints her as a bit of a wet blanket amidst this macho merriment.

It's refreshing to see Brosnan shed Bond and deliver a regular Irish bloke with a 5 o'clock shadow and a bit of beer on his breath. He's utterly convincing as a charmer with a fierce love for his children and who knew he had such a decent singing voice! Bates is a blast as colorful Connolly but Quinn and Rea serve as two dimensional characters, one hale and good tempered, the other hangdog and pessimistic. Margulies remains appealing even though she spends a good part of the film nagging. Vavasseur has a little adult quality, handling the childish belief in grandad's angels rays with a seriousness that keeps the notion from becoming cloying.

While there's much to admire about Pender's script, it comes across as episodic and Beresford doesn't transition his scenes well enough to cover the shortcoming. The actors work well as an ensemble, though, and the production design (John Stoddart) is faithful to the era and location.

"Evelyn" doesn't aspire to a grand scale and accomplishes on a small one. Its heart is real.

Inspirational, David versus Goliath films that pit one man against the church and state to get back what is rightly his are usually serious, often dour fables that wear their hearts on their sleeves. "Evelyn" deals with some serious issues, too, but the story, by Paul Pender, also infuses charm and humor into Desmond's battle to get back his kids.

When Charlotte Doyle (Mairead Devlin), obviously unhappy with her marriage and the burden of raising her kids, Evelyn (Sophie Vavasseur), Dermot (Niall Beagan) and Maurice (Hugh MacDonagh), ups and leaves her family with another man, unemployed Desmond is left to care for the three youngsters by himself. His mother-in-law reports the abandonment and Desmond's out-of-work status to the authorities and a member of the Society for the Prevention of Cruelty to Children pays a visit to Doyle home. The law, Des is told, prohibits the single, unemployed parent from raising his kids alone. The Catch-22 statute states that only the petition by both parents for custody of the kids would allow Doyle to keep the children, unless one of the parents is dead. The logic that Desmond cannot locate his wayward wife for her signature falls on the deaf ears of the bureaucracy and the children are spirited away to live in state and Catholic Church-run orphanages.

Doyle has little in the way of job prospects available and sinks deeper and deeper into despair. A kind barmaid at his favorite pub, Bernadette Beattie (Julianna Margulies), takes pity on the bereaved father and guides him to her solicitor brother Michael (Stephen Rea) for help. Entreaties to the court system fail and Desmond fears that he will never get his children back. But, things aren't completely without hope when returning emigrant Nick Barron (Aidan Quinn), a barrister who is qualified to plead Desmond's case, throws his hat into the ring to help, but they lose the case and are not granted the right to appeal. A local bookmaker, who made a killing on the betting over the case, gives all of his winnings to Desmond to help him and his legal team with their expenses. The plucky little gang then enlists Tom Connelly (Alan Bates), a former rugby star and an expert in Irish family law.

Since the court had already denied Desmond the right to appeal his original case, Connelly advises him and his legal counsel to bring their cause to the Irish Supreme Court and attack the unfair law instead. They still have an uphill battle, though, when they learn that the judge who had heard, and denied, their case earlier had been recently appointed to the highest Irish court and would be a member of the tribunal deciding on their new petition. Unfazed, the plucky team cites the country's Minister of Education (Mark Lambert) as the defendant and brings the contest before the high court. You can guess what happens in this true-life story of the little guy versus the system, but how we get there is the real pleasure of "Evelyn."

Pierce Brosnan puts aside his glamorous James Bond persona to play the down-on-his-luck Desmond. The actor gives dimension to his character as he goes from the besotted, forlorn father lamenting the loss of his children in drink to a man who will not give up until he can get back the kids he loves so much. Brosnan is the star name on the film but the rest of the veteran, capable cast provide solid ensemble support. Julianna Margulies, Stephen Rea, Aidan Quinn and Alan Bates all give good performances to their characters and succeed in creating the allies needed for Doyle's cause. Little Sophie Vavasseur is quite charming and believable as the title character and holds her own with the adult cast. Some of the smaller roles, like granddad Henry Doyle (Frank Kelly), are fully realized, too.

Director Bruce Beresford, as you would expect, marshals his cast and crew with a capable, talented hand. Even though the subject is serious the screenplay keeps things on the light side and puts a bright, cheery edge to the proceedings. Unlike some films, of late, that take shots at the Catholic Church (see Peter Mullan's "The Magdellan Sisters" for a scathing indictment against the Church), "Evelyn" shows both good and bad with fairly equal measure. Sister Brigid (Andrea Irvine) is the wicked nun who is Evelyn's nemesis in the orphanage, but the good heart of Sister Felicity (Karen Ardiff), who honestly loves the children in her care, is a balanced counterpoint to the mean doings of "Frigid" Brigid (as the kids in the orphanage call her). Little touches in the script, like Granddad Doyle's assuring explanation of guardian "angel rays" that protect little Evelyn and her brothers represent some of the charm of the film.

"Evelyn" is a little movie and probably won't wow them at the box office, but it is a fit film for the holidays with its uplifting tale of one man who fights back against the injustice of the system and wins the custody of his children.