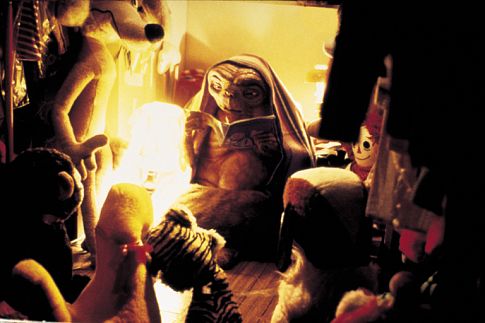 Twenty years ago a film legend was born with the story of a little alien left stranded, alone, on Earth. His friendship with a young boy and an overwhelming need to "phone home" touched the hearts of millions around the world. Now, it's time to dust off the legend, spruce it up a bit and capture the hearts of millions more in the anniversary release of Steven Spielberg's "E.T. The Extra-Terrestrial."

Twenty years ago, a movie about a young boy who befriends a stranded alien opened with little pre-release fanfare and went on to become one of the most beloved (and top grossing) films of all time. Director Steven Spielberg has added 5 minutes of footage and taken advantage of technological advances to enhance the effects of his quintessential film, "E.T. - The Extra-Terrestrial."

After two decades, one might expect a revisiting of E.T. to produce embarrassment at having succumbed to Spielberg's manipulative sentimentality, but "E.T.," when seen on the big screen as it should be, works its magic once again. At its heart a boy-and-his-dog story, "E.T." soars on the basis of the on screen believability of Carlo Rambaldi's titular creation and its director's innate ability to capture the world through a child's eyes.

Speaking of eyes, Spielberg recognized the maternal compulsion to react to the large, wide set eyes of a newborn and emphasized that feature throughout his film, whether balancing a shot of E.T. with an eyelit Elliott (Henry Thomas, "All the Pretty Horses") or offering a closeup of a jar-jailed frog. It's no surprise that this film's harried single mom (Dee Wallace Stone, "The Frighteners") would overlook E.T. hiding in plain site amidst a pyramid of teddy bears and other huggable toys.

When government investigators get too close to an alien spaceship, it departs, leaving behind one of its own. The little alien makes its way to a suburban backyard storage shed, where he's discovered by Elliott. E.T. makes a telepathic connection to Elliott and is soon hidden in his room and introduced to older brother Michael (Robert MacNaughton, "I Am the cheese") and younger sister Gertie (Drew Barrymore, "Riding in Cars with boys"). It's up to this trio to enable E.T. to make his way home as Earth's atmosphere is having a degenerative effect on the little guy.

Spielberg gets some of the best child performances ever captured on film from the empathetic Thomas and side-splitting natural Barrymore with MacNaughton ably bridging the child-adult gap. His staging of Elliott's biology class rebellion, where reacting to E.T.'s beer consumption back home he sets free all the frogs, is classic filmmaking. (The recipient of Elliott's "The Quiet Man" kiss is future Playboy Playmate Erika Eleniak).

"E.T." is not without flaws, though, particularly in the heavy handed home invasion which begins the film's final segment. The menacing, faceless figures which enter the house's orifices are a manipulative effect with no story basis. The villainous overtones are softened by Peter Coyote's caring character, Keys, and Spielberg's wise decision to replace the guns formerly yielded by the agents who chase the children with walkie talkies. This tampering may strike some purists as overtly PC, yet it actually makes more sense in the serving of the story. Alas, his overdubbing of mom's exhortation to Michael that he looks like a terrorist with hippie instead doesn't. While Elliott's initial flight past a full moon has been digitally enhanced (his cape now flutters in the wind), the later group flight is saddled with obvious blue screen work and hammy reaction shots from Michael's buddies.

Yet for all that goes before, "E.T." is still one of those magical collaborations where a director's vision is assisted by people working at their peak including Melissa Mathison (screenplay), Allen Daviau (director of photography), John Williams (score), James D. Bissell (production design) and Carol Littleton (editor). Only the most hardened heart should be able to resist the glow from the one that anchors this classic.

I attended an advance screening of the 20th anniversary reissue of "E.T." and was struck by several things. One is that Steven Spielberg established himself as the master of manipulation with this opus as he plucked our heartstrings with the sentimentality of a friendship between a little boy and a diminutive alien. The helmer also has a knack of putting a sinister tone to the story, even when there is no actual menace - the faceless men swarming around the darkened woods, flashlights poking beams in all directions, hunting down the frightened, stranded E.T.; or, the invasion into Elliott's home by more faceless government guys dressed in space suits. These are disturbing elements that place a dark edge on the otherwise light and charming adventure tale, even if, in the end, the actions turn benign.

Seeing this flick again, so many years later, also shows that the things that captured our hearts two decades ago still apply today. While I may scorn the rank manipulation of sentimentality endemic in many Spielberg films, I believe, again, in E.T. Not once did it come to mind that the little guy is anything other than real. His reintroduction to a whole new audience of kids will revive this marketing concern - a good thing, too, since Laura's stuffed E.T. toy gave up the ghost years ago - and, I'm sure, the box office takes around the world are going to be huge.

The other thing about "E.T." that I had forgotten about is the caliber of the acting of the kids starring in the film. Henry Thomas, as young Elliott, is outstanding as he, initially, is the only one who believes in the little creature. When his eyes fill with tears over the fate of his friend from another planet, I got all choked up, too, over what is happening to little E.T. Six-year old (at the time) Drew Barrymore is wonderful as Elliott's little sister Gertie. Her innocent denials of Elliott's escapades with his alien buddy or her dealings with the little critter himself are the comic relief through much of the film. Robert MacNaughton, as Elliott and Gertie's elder sibling Mike, is dead on as the older brother who, initially, puts up with his little brother's fantasy imaginings about aliens but becomes a firm ally when the truth is told. The adults in this fantasy adventure - mainly limited to Dee Wallace Stone as the kids' mom and Peter Coyote as the initially sinister government guy who, really, has a heart - don't fare as well as their younger costars.

The reissue of "E.T. - The Extra-Terrestrial," as one expects, has additional footage and changes/updates to the existing film and, overall, it works. E.T.'s first encounter with the "sinister" men in the woods is given a bit more realism to the little guy's escape as he hops, rather than glides (as in the original), to safety. In a politically correct move, Spielberg and the crew at Industrial Light and Magic replace the guns of the swarming Feds, in the climactic chase, with walkie-talkies. This PC move may piss off the purists but in my mind works far better than guys toting guns to take some little kids into custody. One addition I do question is the insert of a scene as mom tries to find Elliott during Halloween. The added scene provides some amusing notes, particularly by Drew Barrymore, but looks like a cross between "Wild In the Streets," "The Crow" and footage of the siege at Attica State Prison. Overall, though, the changes and additions help smooth out some problems with the original rather than seem simply tacked on.

Bringing back "E.T." to the big screen, decades after its first release, and "fixing" the problems that bothered the director turns out to be a big plus. A whole new generation of kids will have the chance to see the magic of the lovable title character and, despite the fact that film technology has grown in leaps and bounds, the "old-fashioned" puppeteering still works and you do believe in the little guy.

This review was published for the 20th anniversary reissue of "E.T."