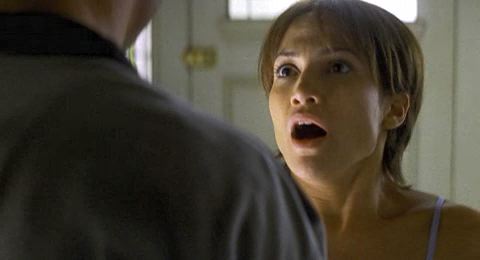 Diner waitress Slim (Jennifer Lopez) is swept off her feet by a chivalrous customer who promises to keep her safe, but by the time their daughter is five, Slim discovers her life is a lie. Stunned to discover her husband Mitch (Billy Campbell, TV's "Once and Again") is having an affair, she's even more shocked when he lays down his law and smacks her around for good measure. Even though the odds of getting away with her daughter are hugely stacked against her, Slim decides she's had "Enough."

British director and documentarian Michael Apted ("Coal Miner's Daughter," the "7 Up" series) and screenwriter Nicholas Kazan ("Reversal of Fortune") go slumming with this glossy, pseudo-feminist "Sleeping with the Enemy" clone. The women win here because they're given roles, while the men exist only to terrorize or protect.

With almost laughable economy, Slim's courtship and fairy tale life are established. We're tipped off that Mitch is no good because a) Slim's best buddy Ginny (Juliette Lewis, "The Way of the Gun") encouraged her to go after him, right after encouraging her to go after the sleazy guy Mitch saves her from and b) Mitch smilingly threatens a senior citizen to buy her her dream home. We know trouble's a'brewin because Mitch distractedly frowns at the horizon during a family beach outing. When Slim confronts Mitch with his infidelity it's like a switch has been flipped - the man becomes insta-psycho, essentially putting his wife into a lock down.

Barely escaping with daughter Gracie (Tessa Allen, TV's "Providence"), Slim keeps moving and changing identities with the help of her diner boss and father stand-in Phil (Christopher Maher) and ex-boyfriend Joe (Dan Futterman, "Urbania"). Mitch has better resources than the F.B.I., and continually sends his thugs, including hysterically determined nut job Hero (Noah Wyle, TV's "ER"), to track her down (and endanger his own daughter). When Slim's exhausted every legal avenue, she confronts her birth father Jupiter (Fred Ward, "The Right Stuff"), a misogynistic millionaire, to fund her transformation into a Mission Impossible-style ninja warrior.

While Lopez is believable as Slim, her situation rarely is. She acquits herself well, though, as a mother and trained athlete. Juliette Lewis gives the most enjoyable performance as the well-meaning friend with a generous heart. The diner is also well represented by Maher, who makes Phil the type of boss anyone would love to have. Futterman is fine as the sensitive Joe, but the script leaves him largely ineffectual. Campbell and Wyle must have been directed to perform as the Terminator teamed with Cruella de Vil. Young Tessa Allen starts off slow, but grows into a complex and likeable five-year old. Fred Ward's character is a complete head-scratcher.

All the technical credits of this watchable, if completely unnecessary, thriller are first rate.

This Jennifer Lopez vehicle is a fender bender from which she emerges with some scrapes and bruises, but we didn't need to witness her receiving them.

"You're safe with me, Slim," Mitch (Bill Campbell) promises his loving wife (Jennifer Lopez) until, one day, she finds out that he isn't the perfect man she thinks he is. A shocking discovery turns the man she loves into a monster and Slim must save herself and protect her young daughter in "Enough."

When a talented team of filmmakers decides to put to celluloid a routine, clichéd script they can turn mediocrity into a slick crowd pleaser that has you rooting for the underdog. At least, that seemed to be the way the audience I saw it with reacted to "Enough." Michael Apted ("Nell") heads his cast and crew and tells the story of Slim, a pretty young waitress working in a diner run by her friend and surrogate father Phil (Christopher Maher). One day, a handsome stranger sits at her booth with a single red rose. The guy comes on to her big time and she is flattered and about to agree to go out with him when another customer intercedes. The stranger, he tells her, made a bet with a buddy that he could get her into bed in a day. Suddenly, the thoughtful customer, Mitch (Bill Campbell), is her knight in shining armor. Before you know it, they are married, have a baby, buy the home of her dreams and have an idyllic life in anyone's book.

In the blink of an eye, things change. While Mitch readies himself to go back to "work" late one night, his pager goes off and Slim, curious, calls the number on his phone. To her shock, a woman answers and speaks intimately, thinking it is Mitch on the line. Slim's life goes from heaven to hell and when she angrily confronts her husband's he punches her out. Stunned, Slim threatens to take their 4-year old daughter, Gracie (Tessa Allen), and leave him. Abuse, Mitch coldly explains, is "the price you pay for having a good life." If she leaves, he'll kill her and keep Gracie all to himself. Slim must escape, but this proves far more difficult than she could possibly imagine as Mitch demonstrates his omnipotence in his control over every aspect of her life. The rest of the story is about Slim reclaiming that life.

Shooting from an original screenplay by Nicolas Kazan (who should actually give credit to the screenplay for an early Julia Roberts vehicle, "Sleeping With the Enemy"), Apted takes the cliché of one woman fighting back against abuse and pushes every button along the way. The first years of the couple's marriage are handled very briefly with nearly nothing, except one minor incident, to set you up for the abrupt violence when Mitch slugs Slim. Once the blows are struck, the true monster comes out as Mitch proves to be all-powerful and capable of total, violent dominance. He is so well connected that he can even take little Gracie from her in a moment.

"Enough" does it by the numbers, albeit with style and high caliber techs, and has the requisite chase scenes, escapes and near-escapes and a, quite literally, kick ass finale. You have to take a lot for granted, like when Slim loses track of Gracie at a marina while talking to her friend Joe (Dan Futterman). She should be hyper aware of the child's whereabouts with what has previously happened but the mandatory plot device requires that she be oblivious until the upcoming tense moment. The no-one-can-help premise is cut and dried and doesn't even try to bring in the complexity of abuse and "the system." The audience loved it all, including Mitch's much-anticipated comeuppance, and that's really all that counts at the box office.

Jennifer Lopez ain't Katherine Hepburn, but she puts 100% into the role and does a sympathetic job as Slim (though that has to be one of the lamest movie names I have ever heard). She also handles the physicality quite well. The guys populating the screen are good looking, all, but pretty uniform, too. Bill Campbell doesn't really have what it takes to be the handsome monster and comes across as forced. Normally good guy Noah Wyle plays out of character as Mitch's henchman (monster bad guys should always have at least one henchman) and does a decent sneering, snide job. Dan Futterman character, as Slim's good-hearted friend Joe, is two-dimensional and here to add some complexity to the Mitch's threats. Only Juliette Lewis, as the heroine's best friend Ginny, comes across well as the good and trustworthy pal. Little Tessa Allen is a likable youngster and fits the bill as Gracie. Fred Ward has a good time as Slim's denying real father who helps out eventually (and expectedly). Christopher Maher is touching and protective as the man that Slim always treated like a father.

Rogier Stoffers ("Quills") does a fine job lensing the proceeds and gives Lopez a glow. Locations are, unrealistically, all over the place from Minnesota to Seattle to San Francisco to LA. Stunt coordinator Simon Crane did a fine job training Lopez to look real in the Israeli martial art of Krav Maga.

The audience cheered as the credits came up and that is what a crowd pleaser is supposed to do. "Enough" isn't a great film. It is entertaining, if a bit too long. At least one person did not like it though - a woman stomped out, a short while into the screening, loudly demanding that all women should leave the theater at once instead of watching what she obviously considered an affront to the feminine sex. Me?