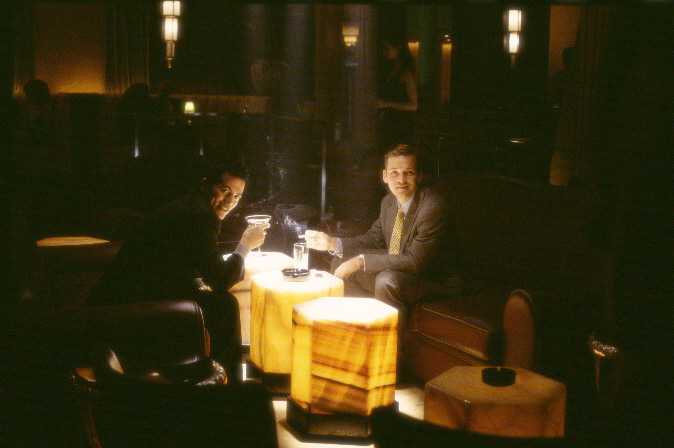 Victor Rosa (John Leguizamo) sees himself as a self-made entrepreneur a la Rockefeller or Gates, except that his business centers on "street pharmaceuticals." For Vic this is but a stepping-stone to legitimacy when he hooks up with a savvy stockbroker, Jack (Peter Sarsgaard), and starts pulling in some straight bucks. But, getting out of the drug business proves to be a lot harder than he figured and Victor may lose everything in "Empire."

Early in "Empire," Victor's told by one of his crew that his favorite saying, 'Keep your friends close but your enemies closer' is from "The Godfather." Actually, it was said in "The Godfather, Part II," but "Empire" is really a retread of "Part III's" 'Just when I thought that I was out they pull me back in.' Choreographer Franc. Reyes' directorial debut has good things to offer, but ultimately it's undone by a sloppy script.

The film begins as Victor describes the layout of his land and the bordering lords who also get their wares from La Columbiana (Isabella Rossellini, "Roger Dodger"). Victor's crew is made up of best friend Jimmy (Vincent Laresca, "K-PAX"), Chedda (Treach, "Jason's Lyric") and Jay, the simple one who ironically will point out Victor's stupidity when his world unravels. Victor explains while Tito (Fat Joe) cuts his brand, Severe, he gets more loyal customers keeping his Empire pure. When one of Tito's crew muscles into Victor's territory it begins a war that tragically takes the life of an innocent bystander - Tito's young son. As Carmen is pregnant, Victor is doubly traumatized, and embraces the lifestyle Jack Wimmer offers, handing the Empire over to Jimmy. But greed sends Victor back to La Columbiana and the deal she strikes puts Victor back into the old life.

Franc. Reyes displays some real style in "Empire." You can see his choreography experience displayed in the balletic camera moves and scenes that dissolve into the next like dancers switching partners. An early montage accompanying Victor's discourse on spending money is humorous and indebted to similar scenes in Scorcese's "Goodfellas" and "Casino." Ruben Blades' original music adds a nice ethnic beat.

John Leguizamo, in his first leading role, is dynamic, commanding his turf wearing a gold medallion the size of a saucer. Isabella Rossellini drops into the most outrageous roles and pulls them off and her La Columbiana is no exception. Also good is Nestor Serrano ("City by the Sea") as her henchman brother. Sarsgaard underplays Jimmy, a good choice.

Reyes isn't as lucky with the rest of his cast, with some performances amateurish. His more serious problem, though, is with his script. While he covers no new ground here, he at least begins his story somewhat inventively, but his con is confusing - dollar amounts don't always seem to add up - and he cheats the audience while covering his tracks. Victor has been presented as very smart, yet doesn't question why an investment banker keeps Manhattan real estate empty. Reyes can't overcome the cliche of a gunfight where the largest and only stationary target in the room - Tito - is the last one to be hit, nor can he find a compelling reason for Jimmy's character to suddenly display a rashness that's never been led up to.

"Empire's" got the style, but it's ultimately insubstantial.

The title refers to the custom heroine mixture that is Victor's trademark in the illicit drug world, a business that has proved very lucrative for him and his crew, Jimmy (Vincent Laresca), Chedda (Treach) and Jay (Rafael Baez). Vic's fiancée, Carmen (Delilah Cotto), makes friends with a college classmate, Trish (Denise Richards), who, in turn, introduces Victor to her Wall Street boyfriend, Jack, at a posh penthouse party. The two men hit it off immediately and Jack offers to bring Rosa in on a stock deal. When, later, Jack presents him with a bank check for $2 million, Victor sees this as his chance to break out of the drug underworld and go legit. His decision to go straight is reinforced when he finds out that Carmen is pregnant with his child.

When Jack presents Victor with another stock market business opportunity, one that could earn the ambitious Vic many more millions, he decides to go for broke. But, he doesn't have quite enough cash to make up his $6 million end of the investment deal and seeks the help of his boss, the powerful lady crime chief, La Columbiana (Isabella Rossellini). She fronts him the money that he needs but, by taking it, he is really selling his soul to the devil. The story continues with Victor's rise in his fortune and his fall when things go totally awry.

Writer/director Franc. Reyes debut film is the first entry from Universal Picture's new Latino label, Arenas, launched to produce and distribute films tailored to Hispanic audiences. "Empire" is a low rent version of the Al Pacino flick "Scarface," without the ruthless, ultra violent brutality of the latter film. The story presents Victor's underworld life in a much different light than that of the infamous Tony Montana in the 1983 Brian De Palma film. Vic Roma has a heart. He loves and adores Carmen; he is dedicated to his loyal crew; and, he has the respect of his masters. He is an extremely intelligent young man whom, if he wasn't born to the streets of the South Bronx, would, as Jack say, "be the head of a Fortune 500 company". Victor has no problem with doing whatever needs to be done to protect him and his, but violence, even deadly force, are not something he does with any kind of liking. (He will, however, put a cap in your head in the line of his "duty.")

There are story problems that negatively impact the whole of "Empire." Amounts of money (hundreds of millions of dollars are mentioned more than once) are bandied about with no seeming rhyme or reason. Relationship are developed between the principal characters only to be suddenly switched so they take on an entirely different tack. The risks that Victor takes to borrow a paltry $1.5 million from La Columbiana don't make sense in view of just what that amount of money is really worth today. At one point, Jack gives Victor and Carmen the use of a luxurious, uptown penthouse suite because his firm didn't happen to be using it at the time. And, just what the heck is Jack up to in all this, anyway?

Leguizamo, in his first dramatic lead, does a decent job in giving humanity to Victor. He projects his love for Carmen and his caring for his crew convincingly. If anything, Victor is a little too much of the nice guy for the business he is running, though his relationship with his guys is one of affection and trust that he would feel for his closest friends. Peter Sarsgaard is, oddly, two dimensional in his portrayal of Jack. I never got focus of the character but this is likely the product of the screenplay and not the actor's fault. Denise Richards is, well, Denise Richards as Trish. Isabella Rossellini, with her huge hair, could have comical as drug lord lady La Columbiana, but the actress is able to overcome ridiculous makeup and costume to show the ruthlessness that she is quite comfortable in exercising. Laresca, Treach and Baez, as Victor's crew, do a good job in putting some personality into their roles.

Photography, by Kramer Morgenthau, is sometimes fuzzy and unfocused. Other techs are competent but nothing outstanding.

What "Empire" lacks in depth it makes up for with its heart. Reyes, Leguizamo and the rest have made an honest shot at showing a different world but the film lacks any real resonance.