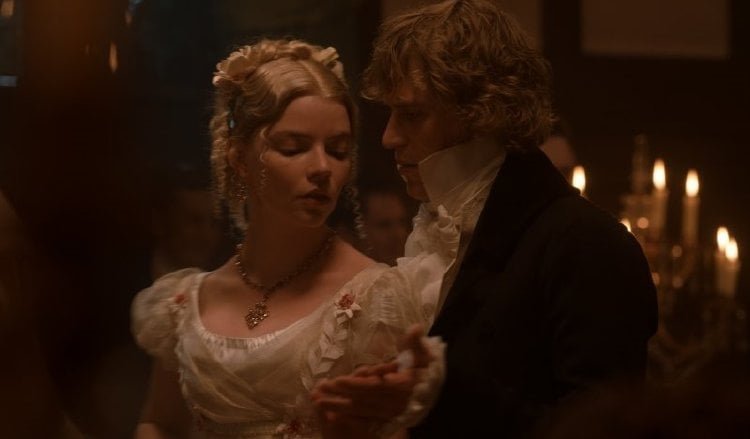 After a misty-eyed exchange between a young woman and her governess (Gemma Whelan, HBO's 'Gentleman Jack'), we learn it is that it is the older woman’s wedding day to Mr. Weston (Rupert Graves), a match made by her meddling younger charge. But the young woman’s favorite pastime will wreck havoc not only on her next target’s love life, but that of her own, something George Knightley (Johnny Flynn, "Beast") forewarns “Emma.”

After Greta Gerwig’s triumphant adaptation of “Little Women” sixteen years after Gillian Armstrong’s strong effort, along comes a music video director, Autumn de Wilde, making her feature debut with another first timer’s (Eleanor Catton) adaptation of the Jane Austen classic fifteen years after Doug McGrath’s Gwyneth Paltrow starrer. This “Emma with period” version may not have as starry a cast as McGrath’s punctuation-less take, but de Wilde and her exceptional ensemble have made the better film, a fresher, more modern retelling less indebted to period tropes.

Take, for example, the character of Miss Bates, a foolish, giggling ‘type’ in the last rendition, here rendered by “Spy’s” Miranda Hart as a more pitiable woman desperate to achieve societal relevance with her incessant gossip about her accomplished niece Jane Fairfax (Amber Anderson). That show-stopping moment when Emma (Anya Taylor-Joy, "The Witch"), thinking she’s employing superior wit, insults the woman at an outdoor picnic, carries far more weight here, Taylor-Joy immediately realizing her shameful misstep as a fault of her own character whereas Paltrow’s confused reaction expressed dismay at the disapproval directed her way. De Wilde’s characters are more organic, their human foibles naturally funny rather than playing for broader comedy.

Knightley’s introduction is altogether astonishing, the young man disheveled from a hard gallop stripped down completely before being redressed by his valet to walk to the Woodhouses’, a scene usually reserved for women and with far less nudity. He is alarmed listening to Emma’s latest plot to divert Harriet Smith (Mia Goth, "A Cure for Wellness"), a young woman of mysterious birth, from a great match to besotted farmer Robert Martin, towards Highbury’s parson Mr. Elton (Josh O'Connor, "God's Own Country"), a man Knightley recognizes is playing the field. Meanwhile Emma herself is enthralled with the very idea of Frank Churchhill (Callum Turner, "Green Room"), a man who neglects to attend his father’s own wedding in lieu of currying favor with the aunt from whom he’s poised to inherit a vast fortune.

“Emma” is one of Austen’s most delightfully playful novels, its heroine flawed but still easy to root for with her general good nature. As Knightley recognizes, her vanity is not tied to her great beauty but in her belief in knowing what is best for others, and the filmmakers expertly set up her failures as a series of inconvenient twists. Taylor-Joy is delightful as the scheming matchmaker who declares herself utterly devoted to her hypochondriac father (Bill Nighy, hilarious without stealing scenes) but clearly put out when Jane Fairfax’s charms catch Churchill’s eye. She and Flynn have the affectionately combative relationship of sister and brother until that sizzling climatic dance scene which throws them both for a loop. Flynn, who has a bit of Tom Hardy’s brutish appeal, is sure to see his stock rise after this more modern, beautifully modulated performance. Mia Goth is touching as Harriet, idolizing her friend yet confused by the choices she makes for her (her character is given the loveliest tribute by Flynn’s Knightley during his come to Jesus moment with Emma). Josh O’Connor gives us an entirely new Mr. Elton, outwardly obsequious with his ever present wide smile yet more psychologically subtle (Tanya Reynolds is supported by an overly elaborate updo as his eventual, overbearing, obnoxious wife). Also giving the film a modern edge is Oliver Chris, who plays Emma’s put upon brother-in-law John Knightley.

Cinematographer Christopher Blauvelt (“mid90s”) switches things up, coming at characters from unusual angles, equating them to marble statues or shooting them from behind in a quiet alcove as a ball swirls by. Production designer Kave Quinn ("Judy") features the grand estates of the English countryside with a cleaner, less fussy eye, daytime vistas wide and bright inside and out. Alexandra Byrne's ("Mary Queen of Scots") costume design features unusual period details, like the eye-catching natural coral earrings Emma frequently wears, while hair and makeup accentuate social differences with hairstyles veering from homespun plain to maid-intensive elaborate. Music by David Schweitzer and Isobel Waller-Bridge is playfully upbeat, if bordering on insistent. Flynn does double duty, not only starring, but writing and singing the film’s original song, ‘My Queen Bee,’ over the closing credits.