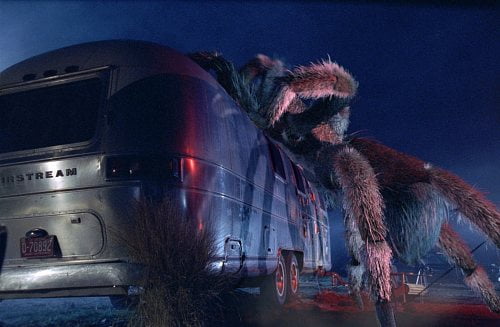 The sleepy driver of a truck hauling hazardous waste swerves to avoid hitting a bunny rabbit and a barrel of the toxic stuff falls off and lands in a pond. A reclusive spider farm owner, Josh (Tom Noonan), collects bugs from the site to feed his precious arachnids not knowing that the spider food is contaminated. When the multi-legged beasts grow to enormous size and escape, the residents of nearby Prosperity, Arizona face annihilation from the "Eight Legged Freaks."

An exotic spider farm with an eccentric owner (Tom Noonan, "The Pledge") is the favorite after school destination of Cochise County Sheriff Samantha Parker's (Kari Wuhrer, "Anaconda") young son Mike (Scott Terra), although he's forbidden to go there. Pleasant Valley's corrupt mayor (Leon Rippy, "The Patriot") is secretly storing toxic waste in the faltering McCormick mines nearby. It is inevitable that these two combustible ingredients will meet and become the serious threat that are "Eight Legged Freaks."

Meanwhile mining engineer Chris McCormick (David Arquette, "Scream") returns home after having punched out the Sheriff's (now ex) husband ten years earlier. Aunt Gladys (Eileen Ryan, "The Pledge,") advises him to go tell the Sheriff how he feels right away. Bumbling Chris makes the first of many attempts, but, in a cute running gag, will be interrupted for the rest of the movie.

As paranoid conspiracy/alien invader prophet DJ Harlan Griffith (Doug E. Doug, "Cool Runnings") broadcasts to the town from an old silver trailer, pets begin to disappear, followed by ostrich from the mayor's farm, then Aunt Gladys. 'No one ever believes the kid' observes Mike, wielding a two foot spider leg he's found at Joshua's web-coated farm. A muffled scream from older sister Ashley's (Scarlett Johansson, "Ghost World") bedroom brings the adults to witness an oversized male orb weaver in action for themselves. Sheriff Parker enlists Deputy Pete (Rick Overton, the poor man's Jeffrey Tambor) to bring all police weaponry (including Lee Harvey Oswald's rifle) before rallying the town to gather at Prosperity Mall for a final showdown (shades of "Dawn of the Dead").

"Eight Legged Freaks" does a lot of things right. It features a strong central female character being ably assisted by a love interest (Wuhrer and Arquette work well together). The Deputy who's initially played for a dummy (a tip o' the hat to Arquette's "Scream" character perchance?) is heroic when it counts. The jokey film references are often subtle (watch for the townsperson amidst the armed mall mob who wears a hockey mask). The spider effects are fun, particularly the jumpers chasing dirt bikes through the desert and those trap door sneaks leaving a flurry of feathers where an ostrich used to be.

Even though this is a self-aware parody, the body build up began to bother me. Multitudes of people are attacked by spiders, but unless the person is one of the central characters, NO ONE EVER ATTEMPTS TO HELP THEM. Yes, it's fun for a while, but it runs out of steam completely around the hour mark.

"Eight Legged Freaks" would be great programming for the summer drive-in if there were any of those venues left.

The makers of such films as "Independence Day" and "Godzilla," Roland Emmerich and Dean Devlin, put on their producer caps to bring us a tale of nature gone mad at the hand of man. It's about giant-sized tarantulas, humungous trap door spiders and one really mean female arachnid that lay waste to the tiny Arizona town. But, there's a hero in the village, young Mike (Scott Terra), the son of the pretty local sheriff Sam Parker (Kari Wuhrer). Mike had, clandestinely and against his mother's wishes, spent many a secret day hanging around Josh's place and learned a great deal about the farmer's eight legged favorites. His knowledge about spiders proves to be the saving grace when the arac attack hits the town.

"Eight Legged Freaks" is the ideal kind of film to escape the heat on a hot summer's night when you don't want to give a great deal of your mind to the screen. You can leave your brain outside the theater with this one as you can pretty much predict just what is going to happen. It's a cross between the previous spiders against man flick, "Arachnophobia," and the space monsters that swarm the humans in "Starship Troopers." This one is amiable, predictable and visually seamless as the huge, bloated spiders invade Prosperity and pick off anything that moves. It starts with a parrot, then a cat, then a dog and soon escalates into the human world as the clueless population gets picked off one by one to become a late night stack for the gargantuan mother spider. Thank the heavens that young Mike knows the spiders' habits.

David Arquette is ostensibly the star of "Eight Legged Freaks" with his billing over the title, but this is really an ensemble film with lots of small roles and goofy dialogue. "What are those things!?" exclaims the town mayor. "They're spiders, man!' he is told by Deputy Pete. With lines like that you know that it is the special F/X that is the real star of the movie. The team that brings these big, mean, hungry arachnids to life take some liberty with the numbers involved, reported by Mike to be 100 or 200 spiders in number. As the spiders raid Prosperity and the town folk strike back, it looks like the eight-legged invaders number in the thousands, not hundreds. While this makes for exciting battles, once the mayhem gets underway it is just more of the same.

Helmer Ellory Elkayem and Jesse Alexander's screenplay (from the story by Elkayem and Randy Kornfield) do inject some left field humor and inside jokes throughout the film. The score, by John Ottman, blends the refrain from the children's song "Itsy Bitsy Spider" into the mix. There is sight and sound homage to the classic sc-fi thriller, "Them," sprinkled about and even a nod to David Bowie when one of the protags claims that "spiders from Mars" are invading them This helps to keep things a bit more interesting as monster threatens man and man rises to the threat.

"Eight Legged Freaks" won't join the pantheon of great monster/science fiction flicks that we have come to love, but it will provide 99 minutes of summer fun for those of us that want to vacate at the movies. Be warned, if you are squeamish about bugs and spiders this may not be the flick for you.