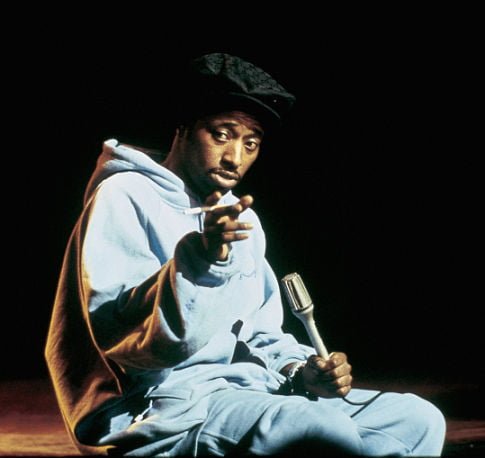 Writer/producer Eddie Griffin ("Undercover Brother," "Double Take") teamed with director George Gallo ("Double Take") to make more than just another standup comedy film. In addition to material from two sold-out shows in Chicago, Griffin travelled to a reunion in his home town of Kansas City, Missouri to introduce his audience to his comic inspiration, his "Dysfunktional Family."

Griffin wastes no time tipping his hat to his idol Richard Pryor during his opening concert salvos with a bit on the way white people walk. He also follows what seems to be the current de rigueur rule for concert standup to include some pretty raunchy sex talk that's one of the weaker elements of his act, but fortunately his routine isn't all second hand material. Bits on Bin Laden and box cutters and famous people who missed their calling (Sammy Davis Jr. working at McD's, Bill Cosby as a pimp) are clever and a terribly un-PC riff on a father's reaction to his son's homosexuality is hilarious. Griffin derives his real meat and potatoes, though, from recalling the family events which shaped him.

Doing Margaret Cho one better, Griffin relates stories of a strict mom who once chased him through the neighborhood in her car while also showing the loving bond that still exists between the two today. Cinematographer Theo van de Sande switches from predictable concert shooting mode to follow Griffin about 'KC-Mo' catching the comic with family and friends on high definition digital video. We meet Uncle Bucky, the crack addicted pimp who often looked after the young Eddie when he wasn't incarcerated, and Uncle Curtis, a man happy to ruminate on and display his extensive collection of porno movies. Griffin works in tales of home town race relations with hilarious and affectionate memories of his white grandfather, Uncle Bill, a man whose gruffness distracted from his decency. A visit to his old school gives Griffin a chance to show off both his song and dance talents as well as his natural ability to work with kids. (An accompanying hip hop soundtrack featuring Jay-Z, Lisa 'Left Eye' Lopes, Ashanti and Griffin himself performing with Danny Boy was produced by Suge Knight.)

"Dysfunktional Family" is an uneven balance of concert and documentary. The characters we see in the home town reunion footage aren't painted as colorfully as Griffin's hilarious stage recollections and sometimes the Kansas City segments seem like filler. As a comic, though, Griffin is warmer, funnier and more entertaining than the more famous Martin Lawrence.