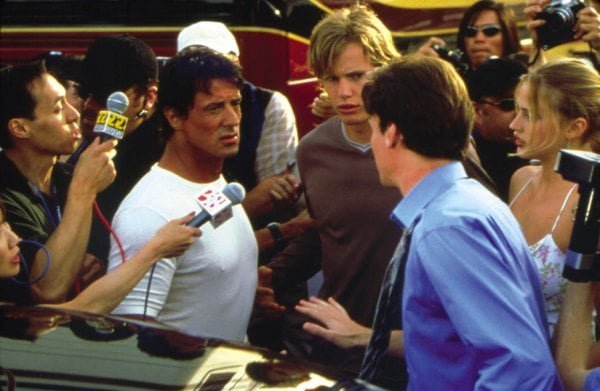 At speeds in excess of 240 miles per hour and only inches apart from each other, CART (Championship Auto Racing Team) race car drivers are members of the world's most deadly professional sport. When up-and-coming rookie Jimmy Bly (Kip Pardue) starts to have doubts about his driving ability, team owner Carl Henry (Burt Reynolds) brings back veteran driver Joe Tanto (Sylvester Stallone) to mentor the lad and win the champion's laurel in Renny Harlin's "Driven."

"Driven" reunites the writer/star (Stallone) and director (Renny Harlin) of Stallone's last hit "Cliffhanger," but the pairing is less successful this time around the track.

Stallone once again casts himself as a sensitive, damaged pro although we're never really clued into the trauma of Tanto's past (something about almost getting killed in a race). He's brought in to mentor Blye, but has his access to the young racer blocked by Blye's ambitious brother/manager DeMille (a one-dimensional Robert Sean Leonard).

Brandenburg, needing to refocus after losing one too many races to a rookie, dumps his fiance Sophia (Estella Warren). Still part of Beau's crew, Sophia starts up a friendship with Jimmy which Jimmy hopes will turn to romance. When Beau approaches and rewins Sophia at a racing event, Jimmy sets off in a pique, taking a racing car into the streets of Chicago. Tanto follows and cools the hotheaded Blye off so everyone can get down to driving cars.

Stallone, who was nominated for an Oscar for writing "Rocky" back in 1976, serves up some real dreck with "Driven." This is the kind of flick that finds two racers seriously endangering the city streets only to have a Yoda/Luke moment and walk away without so much as a police warning. There's too much stupid speechifying ('Faith is like a good disease - it's contagious.'), too little character development, and too many reality-defying moments. Director Harlin appears to be trying to cop Oliver Stone's "Any Given Sunday" style, but instead achieves empty flash. CGI effects are so overused that you'll feel like you're inside a video game.

Even so, Stallone works in a couple of good bits, such as Tanto's talent for picking up quarters on the racetrack and the hilariously witchy exchange between Tanto's ex-wife (Gina Gershon, "Showgirls") and new love interest (Stacy Edwards, "The Next Best Thing"). Harlin also does put his audience inside a race car travelling at speeds of 240 mph, hurtles crashed car parts at us with glee and turns his sound levels up to 11. Newcomer Cristian de la Fuente is a find as good-natured driver Memo Moreno, Joe's old buddy who just happens to have married his ex-wife. Also promising is model/synchronized swimmer Warren.

Overall, "Driven's" a pretty silly movie, but it does offer some emtpy-headed thrills.

As someone who faithfully followed international car racing many years ago, I have always had a fondness for racing movies. Unfortunately, for me, only two of the many such flicks made, Steve McQueen's "Le Mans" and the 1950 Clark Gable starrer "To Please a Lady," impressed me. I've watched all the rest, from the painfully rendered "Bobby Deerfield" to the lavish melodrama "Grand Prix" to the overblown "Days of Thunder," and generally find them lacking. There is usually too much talking/romancing and not enough racing.

"Driven" has ample quantities of moralizing, bickering, romancing and racing, but none of it gets below the surface level. There are multiple melodramatic stories in the Stallone-scripted flick. The latest leader on the racing circuit, Beau Brandenberg (Til Sweiger), is being challenged by young Turk, Jimmy Bly, and dumps his longtime girlfriend Sophia (Estella Warner) so he can concentrate on his job. Jimmy, pushed into professional racing by his ambitious brother DeMille (Robert Sean Leonard), is having doubts about his ability to take the pressures of his chosen career. And, he wants Sophia. Ambitious and ruthless race team owner Carl Henry dumps his second driver, Memo Moreno, and brings on Joe Tanto to whip Jimmy into shape. Memo is married to Joe's ex-wife, Cathy (Gina Gershon), who's none too happy about Joe's arrival. Joe is conflicted about his return to auto racing after a near fatal accident years before. Joe is also having a flirtatious professional relationship with beautiful journalist Luc Jones (Stacy Edwards). And there's racing, too, in this high tech, high-speed soap opera.

The glue that holds these many stories together is the racing. There is a great deal of noise accompanying the fast-paced, music vid-style visuals of the racing as the story covers the Indy-style racing circuit. The races look good, but the focus rests solely on the principals as the two leaders battle for first place in one race after another. The rest of the field, which includes a bevy of pro drivers, are left to the background, as if there is no other race going on but for those in the lead. If you've ever followed car racing, you know that lots of the excitement in the sport takes place back in the pack. Not so in "Driven." Also, heavy use of computer generated F/X of the many crashes and close calls bring attention to what are obvious animated bits. The CGI effects are nowhere near as seamless as in, say, "Enemy at the Gates," but are integrated into the multi-camera POVs well enough.

The large ensemble cast goes through the motions but, as seems to be typical in a Renny Harlin film, there is no genuine passion in the any of the characters. Virtually everyone is a two dimensional symbol ranging from ambitious and driven (no pun) to sorrowful and contemplative. Stallone, in particular, takes on a guilt-ridden persona as he looks, sadly with his puppy-dog eyes, on his past choices and present conflicts. Newcomer Pardue ("The Replacements") doesn't deliver the chutzpah that a young buck new to pro racing should and would have. Gina Gershon is both sexy and venomous as Memo's ambitious wife, but because of limited time on-screen, is merely unlikable. Burt Reynolds is the only one to come across as a person, albeit a ruthless, forceful businessman who only cares about winning at whatever the cost in men and materials.

"Driven" falls in the middle of the pack of racing flicks that have come out over the years. There is a lot of auto racing, though with a sameness to each race that conveys nothing original - except for some truly eye-wincing crashes. There is also lots of melodrama, but nothing delves into the psyche of the sport. If you really want to see a great racing flick, try to find a copy of "Le Mans." Now that's racing!