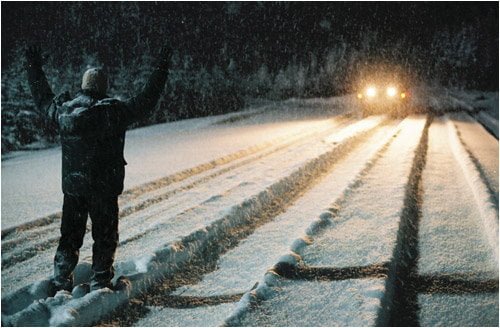 When Jonesy, Henry, Pete and Beaver were kids growing up in a small town in Maine, they saved the life of a strange little boy named Duddits, who became their friend and bestowed them all with psychic powers. Twenty years later each of the four has gone his own way but they still get together for their annual hunting trip. This year, though, things are different - a lost hunter carrying a contagion appears, a huge blizzard on his heels. There is an evil in the storm, somehow related to Duddits, and the quartet must summon their underutilized powers to confront the horror in "Dreamcatcher."

Jonesy (Damian Lewis, HBO's "Band of Brothers"), Henry (Thomas Jane, "The Sweetest Thing"), Pete (Timothy Olyphant, "The Safety of Objects") and Beaver (Jason Lee, "Big Trouble") were already tight friends before they banded together to save a frightened, mentally retarded young boy, Duddits (Donnie Wahlberg, "The Sixth Sense"), from older bullies. In return the mysterious Duddits bestowed the gift of telepathy on the four, who, as adults, meet yearly for a hunting trip in the Maine woods. Duddits's gift also is cause for nightmares, which they ward off with the Indian amulet Duddits taught them to make, the "Dreamcatcher."

As Stephen King recovered from a near-fatal car accident, he wrote "Dreamcatcher," bestowing his own fate on his central character Jonesy. I never read "Dreamcatcher," as it sounded like an unappealing hodgepodge of previous King themes. Judging by director Lawrence Kasdan ("Mumford") and cowriter William Goldman's ("Misery") adaptation, "Dreamcatcher" is kitchen-sink King with a broken garbage disposal. Four male friends since childhood ("Stand By Me," "It") who share telepathy, dreams ("It," "The Shining") and a heroic retarded friend ("The Stand's" Tom Cullen) deal with contagion and military containment ("The Stand" again) caused by aliens seeking human hosts ("Tommyknockers"). Rock lyrics and Red Sox references (several Kings), a character's ability to hide part of his mind ("The Dark Half") and a blizzard ("The Shining") contribute to the rehashed feel, as do the film's aliens which King acknowledges ripping off by calling them Ripleys. An obsession with excrement and effluvium throughout the film is "Dreamcatcher's" inadvertent self-critique - it stinks.

The cast has a couple who try to rise above the muck. Jason Lee is droll, but taken out of the picture early. Lewis is fine as the possessed member of the group, toggling an internal switch that makes him the mild-mannered Jonesy or the arch, English-accented alien. Morgan Freeman, though, just lets his stock continue to sink. As if it weren't bad enough that he appears in too many lame Ashley Judd thrillers, Freeman adds nothing as an over-zealous Colonel. Donnie Wahlberg dumbs down his "Sixth Sense" character and has the added humiliation of being prominently featured in the film's totally ludicrous climax.

Cinematographer John Seale ("The Talented Mr. Ripley"), in collaboration with production, makeup and effects artists, gives the film a look that far surpasses its content. Perhaps credit is most due to the person or persons who put together the film's trailer. They've extracted the 139 minute film's 2 minutes worth of effective moments to make a sow's ear look like a silk purse. "Dreamcatcher" is so inept that its titular spirit-warder never comes into play.

Warner Brothers has craftily used "Dreamcatcher" as a vehicle for the first of the "Animatrix" series of shorts, "Final Flight of the Osiris," created by the Wachowski brothers and "Final Fantasy" animators as preludes to the "Matrix" sequels. It is far more entertaining than the vehicle it is attached to.

I stopped reading Stephen King stories since the appalling "It" and have not gone back but once (with Hearts in Atlantis). King has always had a knack with roping the reader in with his strange, horrific premises, but has, with most of his later books, left me cold with their oft-regenerated conclusions. As such, I did not read Dreamcatcher but, still, the coming attractions of the film adaptation had intrigued me. This is especially the case considering the director (Lawrence Kasdan), the scripters (Kasdan and William Goldsmith) and the film's top billed star (Morgan Freeman) being involved. Man, was I disappointed.

Things start off well enough as we meet the four principals - Henry (Thomas Jane), Jonesy (Damian Lewis), Beaver (Jason Lee) and Pete (Timothy Olyphant) - in their work environs. Each displays certain psychic abilities that we learn were bestowed upon them many years ago. Flashback 20 years and we see the young versions of the four as they put a stop to some older bullies abusing a young retarded boy named Duddits (Andrew Robb). The boy rewards his new friends by giving then psychic powers. Back to modern days and Jonesy nearly dies when hit by a car, allegedly after being summoned across a busy main street by young Duddits.

The stage is thus set as now, six months after the accident, the quartet head to a cabin in the isolated woods of Maine for their annual hunting trip. A lost hunter, Rick McCarthy (Eric Keenleyside), shows up and there is obviously something seriously wrong with the man. Then, Jonesy and Beaver see the migration of all of the forest creatures away from "something." "Even the bears look scared!" says the bewildered Jonesy. Their not-too-well visitor ups and dies, but not before a giant worm-like creature exits his body a la "Alien" (from a body orifice, rather than bursting from his stomach).

We know something big is coming up when a military helicopter flies over the cabin and announces over the loudspeaker "the area is under quarantine. Stay where you are!" This is when things shift into typical Stephen King mode as the members of the little club fall victim to the alien invaders. This is interesting enough and could have been the makings of a good story, but the Army comes into the picture, under the leadership of veteran alien hunter Col. Abe Curtis (Freeman). He is at war with the invaders and will brook no questioning of his authority. It's a race against the clock as the remaining members of the four must stop the aliens while mad Col. Curtis tries to stop them.

Once the premise of aliens attempting to take over the world is established, the film takes a downturn in its routine, often silly, telling. The spooky aspects that are set up early in the film give way to the high-tech, special F/X laden action that make up the bulk of the second half. Maybe if "Dreamcatcher" ran 90 minutes and kept things moving, it might be different, even better. But, with a near 140-minute runtime, it is a bloated, meandering film that does lots to gross you out but little to intrigue.

The actors help things along, though they are given woefully little to do - with the exception on Damian Lewis who gets the dual roles of Jonesy and the English-accented alien that possesses him. Techs are terrifically rendered and deserve to be a part of a better movie. I knew there was a reason I stopped reading Stephen King stories and "Dreamcatcher" exemplifies why.

Warner Brothers is using "Dreamcatcher" as the launching pad to present its "Animatrix" series of nine short films that will be leading off WB's feature film products as a hook for its upcoming and highly anticipated "The Matrix" sequels.