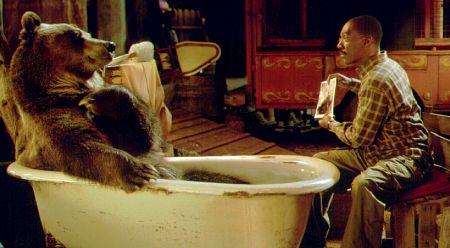 Eddie Murphy's back as the San Franciscan doctor who can talk to the animals. Just as he's coming to terms with daughter Charisse's (Raven-Symone, "Dr. Dolittle") sixteenth birthday and dating, Dr. D's given a message from a possum (voice of Isaac Hayes) that he must meet with a beaver in the forest. When the possum's ignored, a rather mobster-like raccoon (voice of Michael Rapaport) appears with smooth birthday wishes and a more forceful request. Dr. D meets the beaver (Richard C. Sarafian) and learns they need his assistance to keep developers from destroying their forest. Dr. D's at a loss, until he discovers that a lone, endangered Pacific Western bear lives there - if he can find a mate and establish the forest as breeding grounds, the government will step in to protect their habitat. Dr. D finds Archie (voice of Steve Zahn), a circus bear who likes the plush life, and attempts to turn him into a macho suitor in "Dr. Dolittle 2."

"Dr. Dolittle 2" features a new director (Steve Carr) and the film's original screenwriter (Larry Levin). This is a sequel with the same strengths and the same (albeit fewer) flaws as the original.

Once again, the story sags when focus is on the human characters, although some spirit is injected by Lil' Zane as Charisse's new boyfriend. (It's fun to watch Murphy rif on the protective dad thing.) The bad-guy developers (Jeffrey Jones and Kevin Pollack) aren't as obtrusive as the evil medical practice partners of the original, either. However, once again Mrs. Dolittle (Kyla Pratt) is painted as a shrew when painfully obvious miscommunications have her ordering her husband out of the bedroom and onto to the couch.

When the filmmakers and special effects maestros turn to the animals, however, "Dr. Dolittle 2" mostly works. Eva, the forest's wild female bear (charmingly voiced by Lisa Kudrow) immediately declares Archie weird, but his funny antics and persistence begin to make inroads. We do learn more than we need to about Archie's wild and domesticated bathroom habits, and there's Lucky's territory marking competition with a wolf, but the toilet humor comes with the film's demographics. The mob societal structure of the forest denizens is a nice anthropomorphic touch. New character, Pepito, a chameleon who can't change color, doesn't have much to do with the story, but gets a healthy share of the funny lines.

As with the original, the technical budget has gone towards making the animals interact over making the forest locations seem real.

Eddie Murphy delivers, as do the effects crew, but "Dr. Dolittle 2" is clearly for the kiddies.

The summer movie season and the success of the 1998 remake of Hugh Lofting's long successful children's stories have made a sequel to "Dr. Dolittle" inevitable. And, you get what you expect, though without the little surprises the first story had, with the good doctor honing his "talent" to converse with critters. This time around, we know Dr. D, his family and some of the animal crew (Lucky the Dog (voiced by Norm MacDonald), the rats and the drunken monkey (Phil Proctor) appear again) and are introduced to a whole new gaggle of talking creatures.

Now, Dr. John Dolittle is secure in his God-given gift and opened his clinic doors to humans and animals alike. With his professional life in good working order, John turns his attention to his family, only to find that his daughter, Charisse (Raven-Symone), has become withdrawn and petulant. As he tries to cope with the emotional state of his teenager, he is solicited by a tough-talking raccoon that insists that the doctor come to the nearby forest to have a sit down with his boss, known as The Beaver. The doc agrees to makes the journey and, to his horror, discovers that a lumber company is clear-cutting the forest for profit and the forest creatures' homes are in peril.

Dr. John looks into the situation and finds there is no way to stop the devastation - except if it will save an endangered species. One such candidate is a lone female Pacific Western bear that lives in the woods, but without a mate to propagate the species, the government refuses to save her or the forest. The only male bear of the same species anywhere nearby is the member of a circus troupe and he, Archie (Steve Zahn), refuses to give up his creature comforts - until he catches sight of the attractive femme bear, Eva (Lisa Kudrow). In a Rocky-esque series of events, Dr. Dolittle vows to help change Archie's behavior and introduce the bruin to the forest (and Eva) to make little bears. It's a battle against the clock as John struggles to make Archie a true bear of the world while they try to save the habitat of all the other animals.

"Dr. Dolittle 2" is just what you expect, no less and not more. Half of the film consists of a whole bunch of animal animatronics and computer graphics that give the desired anthropomorphism that we came to enjoy so much the first time around. This is where almost every laugh comes from as the various creatures strut their stuff and sass the good doctor. Man, for some reason, loves to give a human persona to his animals and "Dr. D 2" strikes the right note. When the godfather-like Beaver explains, "I'm just a fisherman blessed with many friends," a la Don Corleone, or his hench-raccoon, Joey, (Michael Rapaport) uses a cell phone, it is funny. The rest of the critters get to put their funny two cents in, too.

The human half of the story fares less well, mainly because it's just too human. There is an evil plot by the state government, greedy businessmen (Jeffrey Jones) and, of course, their lawyers (Kevin Pollack) to destroy the land and make all the animals homeless. The forest critters, led by the understanding Dr. Dolittle, must do battle to stop the megalith and they do so in a way that would make Gandhi proud. But, the man story is the least of the two halves.

The human characters, except for Murphy as the doctor, are superfluous. When John has tender moments with his family or faces off against the corporate baddies, you just want him to go back to the animals. I think, for the next sequel (and I guarantee there will be another), they should forget the people and stick with the animals.

With Lucky marking his territory over and over and Archie having intestinal problems at one point, we are talking lowest common denominator, humor-wise. The target for the toilet humor is the younger audience (which is why more animals/less plot would be better, at least from a kid's POV). The "story" of saving the environment is simply a frame to lay the gags upon and provide the attending parents with an "adult" story when they take their kids to see the doctor and his friends. But, "Dr. Dolittle 2" is for kids and for the kid in us.