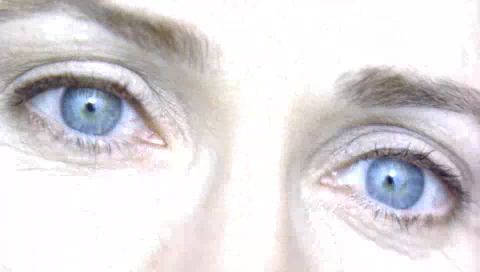 After Dr. Emily Darrow (Susanna Thompson, "Random Hearts") is lost in a freak bus accident on a Venezuelan Red Cross mission, her bereft husband Joe (Kevin Costner) throws himself into sleep deprived hospital shifts until the administrator Hugh Campbell (Joe Morton, "Ali") orders him to take time off.  But instead, Joe remembers a promise to visit Emily's young oncology patients, where he discovers that Emily's trying to send him a message through near death experiences and coma dreams in "Dragonfly."

A dragonfly shaped birthmark on Emily's shoulder had become her symbol, so Joe begins to see them everywhere.  A dragonfly paperweight inexplicably rolls across the floor in the middle of the night.  Neighbor Miriam (Kathy Bates, "American Outlaws") reluctantly brings a package addressed to Emily over and Joe discovers it contains a dragonfly mobile (Emily had been six months pregnant with their first child when she left for Venezuela).  When Joe tells Miriam that their parrot, Big Bird, only ever spoke to Emily, announcing her arrival home, we know we'll hear from it soon.

Meanwhile, Emily's patient Jeffrey (Robert Bailey, Jr.) 'calls out' to Joe one night after his heart stops.  The next day brings one in a series of his near death tales, but this one featured Emily 'in a rainbow' with a message for Joe to go there.  Both Jeffrey and Ben, recently woken from a coma, have taken to drawing odd symbols that Joe describes as 'a crucifix made of jello.' (Of course, they also resemble dragonflies, which only the audience seems to notice, but it's a bait and switch trick - the real explanation makes little sense as to why Emily would have chosen it.)  Joe's visit to a nun (Linda Hunt), who had been studying the near death experiences on Emily's ward, goes nowhere.

The climatic 'miracle' ending, which finds Joe travelling to Venezuela, is staged like "Close Encounters of the Third Kind" crossed with "The Ten Commandments" featuring a native Venezuelan Indian tribe who like their privacy. The 'surprise' twist has been foreshadowed at the beginning of the film in order to lend it credence when it comes.

High profile support like Joe Morton, Ron Rifkin and Linda Hunt are wasted while Bates' stock as an Oscar winner is plummeting..  Costner does little to arouse us from our stupor.  Young Bailey Jr. gives the film's best performance.

"Dragonfly" is a complete misfire.

Dr. Emily Darrow was on a medical mercy mission when she was killed in a tragic bus accident on a remote mountain road in Venezuela. Her husband, Joe (Kevin Costner), had begged her not to take the trip and now, six months later, he has not recovered from the shock of her death. But, inexplicable events take place and Joe is convinced that Emily is trying to contact him from beyond the grave in "Dragonfly."

It seems that, these days, Hollywood sees fit to use South America as a Mecca for its protagonists to trek to find someone - a kidnapped husband ("Proof of Life"), a family's murderer ("Collateral Damage") and, now, the spirit of a lost wife. The heroes of these stories are ready, willing and able, no matter what, to jump on a plane and head to that continent's most treacherous nether regions, face daunting odds and overcome them with guns, fists, knives or, in Kevin Costner's case in "Dragonfly," an earnest hangdog look that speaks volumes to the hostile natives.

The contrived, overly sentimental screenplay by David Seltzer, Brandon Camp and Mike Thompson (from a story by Camp and Thompson) takes flights of fancy as we learn that the Darrows, both medicos, are dealing with separation. She, Emily, is about six months pregnant and on her way to Venezuela, as a humanitarian doctor, to treat the poor of that country. Of course, Emily's high moral standards dictate that prenatal care (and common sense) takes a back seat to curing the sick and infirm in the Third World. Joe, too, is a second-class citizen to Venezuela's destitute as Emily blithely heads south despite the dangers to her, her unborn baby and, possibly, her marriage.

Joe, ever the understanding husband, relents to Emily's altruism and lets her head off to the wilds south of the border. Her precarious situation (which seemed pretty precarious before she left, especially being pregnant) prompts him to head to Venezuela and find his wife. The phone service in the jungle is, apparently, better than in the States and Joe is able to have a chat with Emily just as the rebel shooting starts (there are always rebels roaming around in South America) and she must flee aboard a school bus. Disaster strikes and wham, bam the bus is pushed into a raging river gorge by a sudden rockslide. Joe arrives at the crash site but when none of the bodies are recovered by the Venezuelan authorities, he heads back home, despondent, to resume his life as an ER doctor.

Months pass and Joe fights his grief by working 24 by 7, making his colleagues crazy in the process. "You're not losing your edge," says his boss, Hugh Campbell (Joe Morton), "you're getting too sharp [with your coworkers]." The administrator orders Joe to take immediate leave, but the troubled doc hangs around the hospital with the excuse that he promised his wife that he'd look in on her oncology patients while she was away. (Of course, it has been over six months since his promise and most of the patients are discharged or deceased.) One little boy, Jeffrey Reardon (Robert Bailey, Jr.), has a heart condition that makes him the near-death experience champ of Chicago Memorial Hospital and he tells Joe that he saw Emily "on the other side" and she has a message for him. This, and other strange, supernatural occurrences, makes Joe believe that Emily is trying to contact him and he haunts the oncology ward for an answer. What he finds sends him packing to Venezuela once again.

Helmer Tom Shadyac made his mark with goofy comedies such as "Ace Ventura: Pet Detective" and "The Nutty Professor," so I was curious with what he could do if he went the drama route (he also directed "Patch Adams," but that flick was saccharine junk, not drama). I expected an either/or situation: either he would prove eclectic enough pull off an effective drama, or he would create a dud. "Dragonfly" is a dud. The direction, acting and bad screenplay bring no life to the contrived story. Shadyac has no sense of dramatic moment and does a poor, by-the-number job in his attempt to grab the heart of the viewer. For me, it isn't the heart he grabs, but something lower on my anatomy.

Kevin Costner has never been what I consider an emotional actor. As a matter of fact, with the exception of, maybe, "Bull Durham," the actor has never given more than two-dimensions to any character he plays. "Dragonfly" is no exception for the actor who uses a pained expression to show emotional loss and grief. I felt no empathy for Joe and can understand why Emily seemed so eager to get away from him, even to the jungles of Venezuela.

Of the supporting cast members only two are of note. Young Robert Bailey, Jr., is a standout as the little boy that first tells "Emily's Joe" that she has a message for him. Susannah Thompson, as Emily, does come across as a beautiful, smart and compassionate lady and does her best to give depth to what could have been just an object of affection. The rest of the cast is there, as far as I can tell, to collect a paycheck, with the likes of Joe Morton, Ron Rifkin, Linda Hunt and Kathy Bates there to attempt to give the background characters some distinction. Bates and Hunt, both Oscar winners, are especially wasted with the former as a lesbian neighbor that cares for Emily's parrot, Big Bird, whenever Joe skips out of the country. Hunt, as a nun with an interest of near-death experiences, is particularly wasted.

Techs are merely OK, though at times the film, itself, looks like it is taken from a work in progress print.

Shoot the director, the writers and the star for this turkey. I did not have great expectations for "Dragonfly" but I am shocked that it is this bad.