Dracula: Pages from a Virgin’s Diary 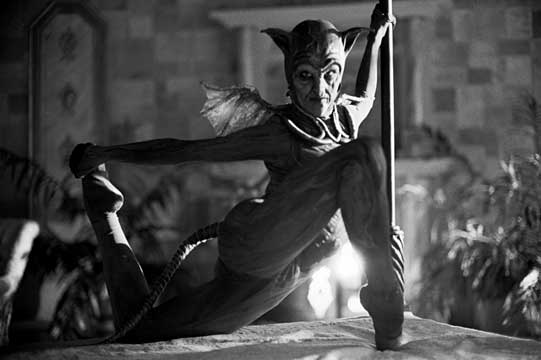 Canadian independent filmmaker Guy Maddin ("Archangel," "The Heart of the World") brings his silent film sensibilities to his first adaptation - Choreographer Mark Godden's interpretation of "Dracula" for the Royal Winnipeg Ballet in "Dracula: Pages From a Virgin's Diary."

It's a wonder that unique auteur Maddin took so long to delve into the horror realm that was a showcase for the German Expressionism of the silent era. "Dracula, Pages From a Virgin's Diary" is no ersatz Murnau film, however, but an experimental combination of dance, theater and film.

Bram Stoker's tale is given a refreshing new arrangement, beginning with Lucy Westenra's (Tara Birtwhistle) flirtatious flutterings among three suitors (cinematographer Paul Suderman's camera from Lucy's point of view perched on a swing shoots forward and draws back from the three men as she makes her choice). Lucy's lusty nature (Birtwhistle recalls Sadie Frost's spin on the character) is made evident by her disappointment at not being allowed three lovers and captures the attention of Dracula (Zhang Wei-Qiang) who is soon at work to make Lucy his bride. Maddin brings out the eroticism of the tale by focusing on Lucy's writhing hands, tied to the bedpost by the scarf which shrouds her neck, as she lets the vampyr feed.

Doctor Van Helsing (Olivier lookalike David Moroni) is skeptical of Lucy's illness and takes the titular diary over her maid's protestations. Confirming his suspicions, the Doctor takes action against the vampire, including a total transfusion of blood for Lucy from her suitors. (Lucy's fiance earnestly declares 'No man knows until he's done it what it feels like to have his blood drawn away into the woman he loves.' Indeed.) A title that sounds like a modern advertisement shouts 'Death! It is only the beginning' after gargoyles dance about Lucy's sleeping form like succubi and she's laid to an unpeaceful rest.

The film's most luminous sequence features a dance between Birtwhistle and Wei-Qiang amidst snowflakes and ground fog in a cemetery. The painterly lighting of this scene separates the set into three distinct depths and makes poetic shadows play across the dancers' faces. After Lucy is dispatched by Van Helsing and her former lovers, the action switches to Jonathan Harker's (Johnny Wright) story, traditionally the beginning of the Dracula tale. This is told in economic flashback before the film focuses on Mina (CindyMarie Small), Jonathan's doe-eyed fiancee who's voracious sexual appetites repel Jonathan but attract the vampyr. The film's final act, where Dracula is hunted down, fails to engage on the same visual level as the rest of the film, but Maddin leaves us with the striking image of the vampyr staked in mid air, recalling the myth's genesis in Vlad the Impaler.

Maddin covers the action from within using multiple techniques while covering the same action. Hand iris shots, vaseline-edged lenses, double and triple exposures, animation (an arrow traces the route of 'immigrants' from the East, blood flows across the filmed image), tinting and title overlays ('Fleshpots!' announces the entrance of Drac's brides) pull us into flickering silents even as footsteps, trains and shovel blades chopping off heads are heard. The ballet is given its due, but this never feels like a recording of a dance piece. The film and dance are scored with Gustav Mahler's Symphony #1 and 2.

Guy Maddin's "Dracula: Pages From a Virgin's Diary" is a nightmare concocted of dreamy imagery.

Experimental filmmaker and cult auteur Guy Maddin has joined with the Royal Winnipeg Ballet in bringing that company's version of the classic Bram Stoker story, Dracula, to the screen in a cinematic interpretation, with dance and the expressionistic music of Gustav Mahler, in "Dracula: Pages from a Virgin's Diary."

Helmer Maddin, known for his out-on-the-edge work, is given the opportunity to bring to film the unique, nicely rendered ballet that melds the supernatural tale of the most famous vampire of them all with a superbly performed ballet giving the work artistic life in movement.

"Dracula" was shot in black-and-white but frequently tinted with bits of vivid red and green. The reds are used, of course, to depict the infamous bloodsucker and the blood of his victims while the green is used to tint money and signal greed. The B&W images are done in a flat manner to give the film a retro, silent look and feel. Little sound is used, except for the score and the occasional footsteps or door closing, and helps to carry forth Maddin's silent film style.

The ballet/play/interpretation of Bram Stoker's much-produced work is concise, at about 70 minutes, and pretty much faithfully tells the story of Dracula that we are so familiar with. The Royal Winnipeg Ballet and Maddin have combined their creativity in a package that will entertain those who love movement and those who can't get enough of the Stoker legend.