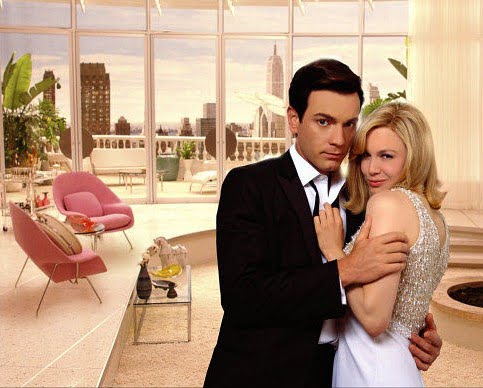 Barbara Novak (Renée Zellweger) arrives in 1963 New York City unprepared for the cultural phenomenon her first book is about to become under the direction of her editor Vikki Hiller (Sarah Paulson, "What Women Want"). Her anti-romance, pro-sex screed is lapped up by women all over the globe, but media-darling Novak is stood up one time too many by 'ladies' man, man's man, man-about-town' investigative columnist Catcher Block (Ewan McGregor, "Moulin Rouge!"). Barbara gets revenge by naming him the ultimate example of why she is "Down With Love."

Director Peyton Reed ("Bring It On"), screenwriters Eve Ahlert and Dennis Drake (both of TV's "The Nanny") and the production team behind "Phone Booth" attempt to pay homage to the Rock Hudson/Doris Day battle-of-the-sexes comedies of the early 1960's, but they never get the tone right and the resulting movie is a melange of hits and misses that owes more to Cosmopolitan's Helen Gurley Brown than to "Pillow Talk." Zellweger, although she often nails Day's facial expressions and vocal inflections, and McGregor, British playboy by way of Dean Martin, give performances that are entirely too self-aware while production design (Andrew Laws, "Phone Booth") takes Austin Power's spoof approach over "Far From Heaven's" faithful recreation of a filmmaking era.

When Novak realizes that Block's missed breakfast, lunch and dinner dates in order to woo a trio of stewardesses, she declares war, but Block's investigative nature gives him an idea - he'll go undercover as a naive Texas astronaut and get the feminist to fall in love. His plan goes swimmingly and the faux romance is mirrored by the real one of Vikki and Catcher's editor Peter MacMannus (David Hyde Pierce, TV's "Frasier") who also provides the perfect square apartment to Block's hip one. The switcheroos and false identities build to the inevitable unmasking, when the audience has the rug pulled out from under them by a silly screenwriting trick that's supposed to be a joke but merely feels out of place. The film's natural end point is upset and it continues on until it satisfies its own misplaced agenda. "Down With Love" offers its most successful bit over its end credits, when Zellweger and McGregor join in a song and dance routine.

As was the case with "The Shape of Things," the supporting couple give the more natural performances. The little known Paulson is delightful as the chain-smoking fashion plate, although the trace of a lisp is distracting. Hyde Pierce is fabulous at this gender-bending physical comedy and delivers the film's funniest line as identities quickly change outside elevator doors. McGregor's transformation into Zip Martin on the spot outside a dry cleaner's is a comic delight, but Zellweger is artificial throughout.

The film's sexual innuendos begin with its retro title animation, but some split screen pseudo-couplings are stolen from Myer's spy spoofs, as is a graphics laden jaunt down Broadway. Costuming (Daniel Orlandi, "Phone Booth") looks more like the parody of extreme Parisian fashions that appeared in the films of the era than anything actually worn at the time.

"Down With Love" is like a strawberry shortcake made with frozen fruit and artificial sweetener - it doesn't look quite right and has a plastic aftertaste, but it's better than no dessert at all.

Barbara Novak (Renee Zellweger) is a Down East girl from Maine who has come to the big city (circa 1962 NYC) to try to sell her new book, a diatribe against love and romance - but not against sex. To her surprise the book is not just a hit, it is a worldwide phenomenon! The success of her tome comes under the scrutiny of chauvinistic men's magazine, Know (read: Playboy clone), writer Catcher Block (Ewan McGregor) who has a scheme to turn Barbara around and get his expose in "Down with Love."

Last year Todd Haynes paid homage to 50's director Douglas Sirk, auteur of such melodramas as "Written on the Wind" and "All That Heaven Allows," with his marvelous film "Far From Heaven." In it, Haynes captures the mood and tone of Sirk's best works as he creates an original film that stands on its own, but still honors Sirk. Helmer Peyton Reed comes up with something that is more of a parody and sendoff and less homage to the Doris Day/Rock Hudson romantic farces of the 50's and 60's, in particular "Pillow Talk."

Confident, sophisticated Barbara comes to New York with her first book, Down with Love, and she takes the city, the country and the world by storm. Her oeuvre is an indictment against male domination and she advises women everywhere to forget about romance - eat chocolate and have uninvolved sex she tells her readers. The book, and its incredible impact on the macho world, comes under the inspection of Know magazine publisher Peter MacMannus (David Hyde Pierce), who puts his top reporter, Catcher, on the job.

The suave, debonair lady-killer resists taking the story and having meets with Barbara, thinking her just a country bumpkin. He misses one appointment after another, always while "entertaining" a succession of sexy stewardesses, until he has a chance encounter with the author at the dry cleaners. Seeing his error in judging the lady without seeing her and a way to get a hook on his assignment, Catcher puts on a southern accent and introduces himself as Zip Martin, a NASA astronaut who has been on a mission for two weeks and unaware who Barbara Novak is. His plan is to make her fall in love with Zip and expose her hypocrisy to the world in a Know exclusive (and restore male dominance to the world once again).

The romance begins and Zip's aw shucks, nice guy demeanor, without a shred of attempt to go get Barbara in bed, begins to hold sway over Novak's resolve to be down on love. This is a virtual remake of "Pillow Talk," with the split screen phone conversations, with all the double entendres (along with naughty action between screens to imply hot sex), and the Rock Hudson recreation, by McGregor, of the playboy wooing a recalcitrant lady and putting on a fake accent. Zellweger does the Doris Day impersonation well - she did her homework, it's obvious - and McGregor carries himself with the necessary elegance his caricature character requires.

Principle support cast is ably led, in a two-dimensional way, by Hyde Pierce as the awestruck boss and sidekick to Catcher and Sarah Paulson helps as Barbara's chain smoking publisher and new best friend Vikki Hiller. Tony Randall, who played the sidekick in the Oscar winning 1959 film, has a fun cameo as the Theodore Banner, the owner of the company publishing Barbara's book.

If the romantic farces of the 50's and 60's, like "Pillow Talk," were artificial renderings of life in the big city back then, then "Down with Love" is a quantum leap in artificiality. The costumes, by Daniel Orlandi, are also a caricature of the earlier film's Jean Louis stylish creations. Sets, by production designer Andrew Laws, are all glitter and flash, just like in the old films, but are, again, parody rather than loving recreation.

Stay through the credits for the song and dance number by McGregor and Zellweger. It is the best thing in the film and makes me wonder why someone hasn't signed up the former for a record contract, his pipes are that good. (Maybe he's waiting for his shot at "American Idol.") I recommend renting "Pillow Talk."