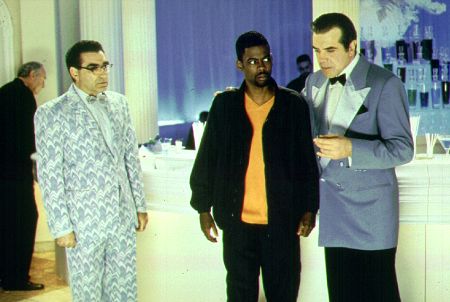 Lance Barton (Chris Rock) is a bicycle messenger and standup comedy wannabe. His hopes for fame abruptly end when he is hit and killed by a truck. Upon his arrival in Heaven, Lance learns that his death was an error and demands his body back. It's too late for that, but he gets the next best thing - the body of an aging, balding, pudgy, white billionaire - in 'Down to Earth."

A remake of the 1978 Warren Beatty vehicle "Heaven Can Wait" (which in turn was a remake of "Here Comes Mr. Jordan"), "Down to Earth" tells the tale of Lance Barton (Chris Rock, "Lethal Weapon IV"), a young Black standup comic trying to win over the audience at Harlem's Apollo Theater. When he's taken to heaven prematurely by bumbling angel Keyes (Eugene Levy, "Best in Show"), his only recourse is to return in another body. He chooses that of Charles Wellington, the tenth richest man in the United States. Of course, Wellington is not only rich, but white and 53 years old, which makes Lance's bid for closing night at the Apollo, as well as his desire to woo Suntee (Regina Taylor, "Jerry Maguire"), a tad tricky.

The original Elaine May/Warren Beatty script has been reworked by Chris Rock, Lance Crouther, Ali LeRoi, and Louis C.K. to turn Beatty's vehicle as a football player into Rock's vehicle as a comic and add some racial humor. As directed by Chris Weitz and Paul Weitz (codirectors of "American Pie" and costars of "Chuck & Buck"), the whole affair comes off as amateur hour.

Initial scenes play like filmed line reading rehearsals. Production values are shoddy. Most serious of all is the use of Rock when his Wellington counterpart would have been more appropriate. This problem is clearly attributable to the fact that the old white guy is never lip or action synched when he IS on screen.

Rock does get the chance to do some fun schtick, such as his turnaround on Wellington's plans for a poor neighborhood hospital ('Bullet in the head? You got a bed!'), but he's uneven when interacting with the rest of the cast. Regina Taylor fares well amidst the mediocrity as the young activist who confusedly ends up falling for the man she believed to be her nemesis. Also good is Frankie Faizon ("Hannibal") as Whitney, Lance's compassionate manager - the only human who's made privy to Lance's body switch. Chaz Palminteri and Levy are pretty much wasted as heaven's ambassadors. Another "Best in Show" alumnus, Jennifer Coolidge, is poorly used as Wellington's cheating wife (AND shown several days apart wearing the SAME outfit?!) and Greg Germann (TV's "Ally McBeal," "Sweet November") continues display his sitcom roots as her lover and husband's lawyer. Mark Addy ("The Full Monty") is sorely underutilized as Cisco, Wellington's fake English butler. Stealing the show in every scene she's in is Wanda Sykes ("The Chris Rock Show") as Wellington's disgruntled maid.

"Down to Earth" is for Chris Rock fans only. All others should go rent "Heaven Can Wait" or truly be brought down to earth.

Chris & Paul Weitz are hoping that their sophomore feature will have the overwhelming success of their debut flick, "American Pie." That film took the low road with bawdy humor and lots of T&A which appealed to its teens and 20's male demographic. This time around, they're going a more classical route with a remake of the 1978 Warren Beatty film, "Heaven Can Wait." (Which, in turn, was a remake of the 1941 classic "Heaven Knows Mr. Jordan," starring Robert Montgomery.) The Weitz boys should have stuck with the bawdy humor and T&A - go with what you know.

"Down to Earth" feels like the copy of a copy it is. The '41 original (which was based on the play by Harry Segall) is a charming, multi-Oscar nom'd original that is laden with mood, mirth and stellar performances. The more shallowly rendered Beatty film added the star's power to the remake, but makes me want to see the original, instead. The Weitz brothers rendition of the story makes the '78 film positively appealing.

Chris Rock has made a name for himself in supporting roles in such flicks as "Lethal Weapon 4" and, more recently, "Nurse Betty." In those, and other, movies he comes across as fast-talking, loud, funny and nasty. As the star of "Down to Earth" he tempers these traits and develops a more amiable character with Lance Barton. The comedian gets a chance to do a goodly amount of standup over the course of the film and he is comfortable with this. But, when he has to "act" he is out of his element and becomes wooden in what feels like dialogue delivery, not thesping. He's likable, though, and will improve with practice.

The rest of the cast goes through the motions without inspiration. Regina King, as Sontee Jenkins, we are required to believe, falls for the above-described old, chubby billionaire because she can "see" something in his eyes. Of course, you almost never see her portly amour, Charles Wellington, except briefly when he does stupid white boy things, like singing rude rap songs amidst a bunch of tough homeboys. Everyone else gives cardboard versions of the characters from the previous works. I don't think the actors - Eugene Levy, Chazz Palminteri, Mark Addy, Frankie Faizon, and others - are to blame, though. The screenplay, by Rock, Lance Crouther, Ali LeRoi and Louis CK, fails to deliver the goods to the cast. Only comedienne Wanda Sykes gets any mileage out of her feisty maid character, Wanda.

The worlds of each of the stories spawned by the Segall play vary. In "Jordan," Montgomery is a sax-playing boxing champ destined for the heavy weight title before his untimely death. "Heaven" has Beatty as a big time quarterback. "Down to Earth" uses comedy as its backdrop with the closing night of the famous Apollo Theater as the forum for Lance's hard work. He uses his vast wealth, in Charles's body, to prep his comedy for the big event, bringing critical attention to the magnate that will mean his own demise. If you want to know more details of the story (they are all much the same), get hold of "Here Comes Mr. Jordan." It's the real treat.

Remakes are tough to pull off and "Down to Earth" has extremely big shoes to fill. If the '41 original is a size 11 (which fits me nicely), this latest is a size 6 - not nearly big enough.