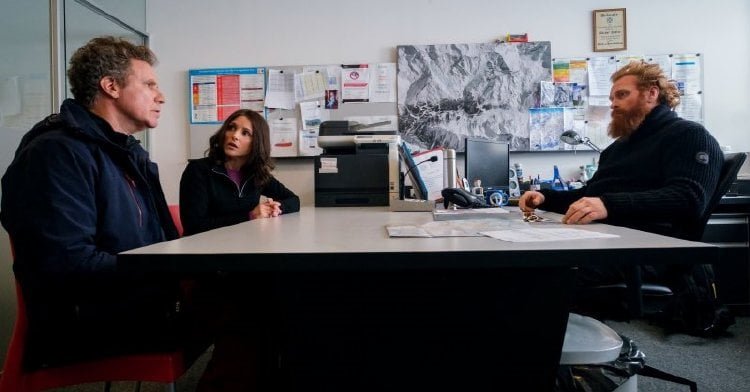 The Stanton family takes a much needed break in the Austrian Alpine ski resort town of Ischgl to reconnect with busy dad Pete (Will Ferrell) who is also still mourning the death of his father 8 months earlier. But when a controlled avalanche appears about to consume the restaurant patio where Pete and Billie (Julia Louis-Dreyfus) are lunching with their two sons, Pete grabs his phone and runs, abandoning his family to apparent certain death and the Stanton family vacation quickly goes “Downhill.”

Cowriter (with 'Succession's' Jesse Armstrong)/directors Nat Faxon and Jim Rash, whose "The Way Way Back" also dealt with a family vacation in paternal crisis, ‘riff’ on Ruben Östlund's Swedish submission for the 2014 Foreign Language Oscar, "Force Majeure" for American audiences and leave us wondering why they bothered. I find their use of the word ‘riff’ rather than remake interesting, as their film follows Östlund's story pretty much beat for beat, yet has none of the filmmaking flair that made the original film so unsettling. Ferrell and Louis-Dreyfus are not to be faulted, both convincingly shaken by the perspective shifting event, but the movie is flat, more “Cross Country” than “Downhill.”

After an awkwardly grouped family photo, Pete and Billie meet a presumptive hotel check-in greeter. Charlotte (Miranda Otto) is aggressively friendly and overtly sexual, insisting that Billie and Pete shed swim suits for a trip to the sauna. But the family’s barely hit the slopes when the critical event happens. Billie and fourteen year-old twins Finn (Julian Grey) and Emerson (Ammon Jacob Ford) react with shocked, accusatory silence while Pete tries to act like nothing’s happened at all (Ferrell’s eyes tell a different story). The kids retreat to video screens. Eventually, Billie gets out the dreaded ‘we need to talk.’ Pete responds by once again checking the European adventures of coworker Zach (Zach Woods, HBO's 'Silicon Valley') and his hashtag happy girlfriend Rosie (Zoe Chao, "Where'd You Go, Bernadette"), inviting them for dinner to avoid the inevitable. Instead he further enrages his wife who goes ahead with her plan in front of his friends.

This is one of the few scenes which kind of works, but the film really goes downhill after this point as Billie takes an ‘alone’ day, packing Pete off to entertain the kids while she’s thrown together with sexy ski instructor Guglielmo (Giulio Berruti) by the meddlesome Charlotte. What was left ambiguous and threatening in the original here is flatly stated or weakly joked upon, like this film’s literal dumping of its ending. Nor do Faxon and Rash do anything notable with their sound design, a distinct element of the Swedish version’s especially given the sonic warnings which precede those controlled avalanches. “Downhill” doesn’t even take advantage of the comedic chops of its two stars, a switch up that may have made an Americanized remake worthwhile. Just call this one a whiteout.