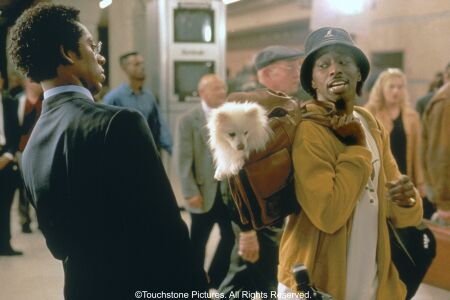 When successful New York City investment banker Daryl Chase (Orlando Jones) is framed for laundering Mexican drug money, he is forced to go on the lam to find the one man who can clear his name. When he switches identities with a petty thief, Freddy Tiffany (Eddie Griffin), he figures he's home free, until he learns that his new alias is in even bigger trouble in "Double Take."

In the tradition of "Silver Streak," "The In-Laws" and "Trading Places," "Double Take" is a likable entry in the buddy, road-trip, beat-the-bad-guy, save-the-girl action flick with two equally likable perfs by the leads. The flick doesn't cover any new territory, but tries to be imaginative in the telling Daryl's tale and his adventures, but is mainly a launch pad for it's stars.

Orlando Jones, you'll remember, was the player who broke out in song in last year's good-natured footballer, "The Replacements." It was a one-note performance, but one that made you notice him. As Daryl Chase, Jones starts out as the straight straightman for a big-time banking firm headed by Charles Allsworth (Edward Herrmann). Their key client, a Mexican "businessman" named Minty Gutierrez (Shawn Elliott), has just deposited a whopping $106 million in their bank and Daryl smells a rat. He is pondering what to do as he is leaving the office when he is mugged, only to be saved by a fast-talking, street-smart rogue named Freddy Tiffany.

Intrigue builds around Daryl when he and his girlfriend Chloe (Garcelle Beauvais) are attacked in their apartment and rescued by Agent McCready (Gary Grubbs) and his men from the CIA. The spook tells Daryl that he must get to Mexico to clear his name and help stop the drug cartel operating there. As the scared banker heads south, he repeatedly crosses paths with the tenacious Freddy, who helps him along his way. The story drives along until its inevitable big shootout finale, which is predicated by the Freddy's declaration, "It's payback time."

"Double Take" is mostly a cliche of the other films mentioned, but it is a good showcase for Griffin and Jones. Eddie Griffin is best known as a comedian and he provides a good deal of stand-up schtick along the way. The good news is that, though his performance consists of a series of skits, dances and fast-talking jive, it is funny! The diminutive Griffin has a screen presence that is going to generate a lot of work for the actor.

Jones gets the opportunity to put variety into his perf as he goes from a staid, conservative banker to a street-smart, hip-hopper who fast-talks his way out of trouble. There are times when the actor mimics his costar to perfection, showing his range and ability. Like Griffin, Jones should stay employed for some time to come.

The supporting cast, though large in number, is definitely left in the background. With the spotlight on the stars, no one else has the chance to thesp, especially with the fast pace of the under 90 minute flick. Edward Herrmann is there to lend his name to the credits and collect a check, only.

The original screenplay, by director George Gallo, combines bits and pieces from other movies of the same ilk. There are definite bad guys, like the drug lord, but there is also a plethora of ambiguous loyalties as the story uses movie sleight of hand to keep you guessing who are the bad guys and who are the good guys. In this case, the CIA, once again, is used as an evil scapegoat as corruption personified. The constant switching of whom is good and bad gets a bit tedious as the film draws to its conclusion. The film ends with the obligatory sitting-around-the-pool-on-a-Caribbean-island scene, but it is used to tie up the last of the story threads.

Production is straightforward with good photography, varied settings and, for Jones and Griffin, some funky costuming.

"Double Take" is a popcorn comedy/actioner that actually supplies both elements. The lead characters are fun and funny and there is ample gunplay for the shoot-em-up fans