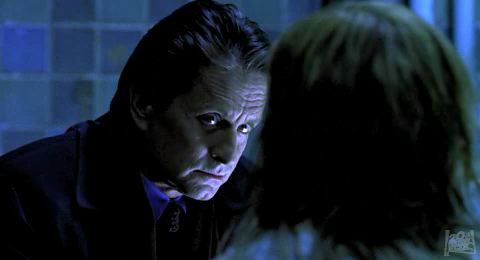 New York psychiatrist Dr. Nathan Conrad (Michael Douglas) is just trying to get home to his laid-up wife Aggie (Famke Janssen, "Made") and eight year old daughter Jessie (Skye McCole Bartusiak, "The Cider House Rules") on Thanksgiving Eve when his friend Jerry Sachs (Oliver Platt, "Lake Placid") sidelines him with the complex case of catatonic, but newly violent Elisabeth Burrows (Brittany Murphy, "Girl, Interrupted").  At home the next morning, Nathan finds his daughter kidnapped and himself in a race against time to unlock a number from Elisabeth's head in "Don't Say a Word."

Nathan's presumed psychiatric expertise with teenagers is established by his telling a panty-stealing preppie that 'we all did that.'  After five minutes with Elisabeth, an eighteen year-old no one's been able to properly diagnose in her last ten years of institutionalized life, Nathan declares her a talented faker.  Elisabeth, creepily played by Murphy in a first scene which recalls Linda Blair in "The Exorcist," apparently accepts Nathan's analysis and begins to assist the doctor even though she fears giving him the information 'they all want.'  So much for this film's tension.

Screenwriter Patrick Smith Kelly ("A Perfect Murder") serves up a bunch of kidnappers who can set up security cameras and bugging devices anywhere they want, but don't have the sense to move their kidnap victim out of her mother's hearing range.  A scary looking kidnapper (Conrad Goode, "Tomcats") begins to soften towards Jessie in a bit of character development that's forgotten when it should count.  A police lieutenant (Jennifer Esposito, "Made") remains on the outskirts of the action until coming into play at the exact right moment during the film's never-ending climax. The head of a Bellevue-like NYC hospital is stupid enough to deny knowledge of a woman who was not only his girlfriend, but interned under him, to a police detective.

While Famke Janssen does her best with her "Sorry, Wrong Number" sideplot, Michael Douglas is left to act determined while racing against an arbitrary deadline.  The promising Brittany Murphy could have made something of her role if the screenplay hadn't abandoned its intriguing setup as soon as it introduced it.  Sean Bean ("Ronin") is a stock bad guy,  Oliver Platt is saddled with a plot-driven character and poor Jennifer Esposito might as well be in a different movie.  Young Skye McCole Bartusiak is believably precocious as Jessie.

Cinematography by Amir Mokri ("Coyote Ugly") and production design by Nelson Coates ("Kiss the Girls") are of higher caliber than the material warrants. Director Gary Fleder, whose film has been leaking air throughout its entire run time, lets the whole thing deflate as one climax leads to another which leads to yet another, each seeming more like stalling for time than anything else.

The old adage holds true - if you can't say something nice, "Don't Say a Word."