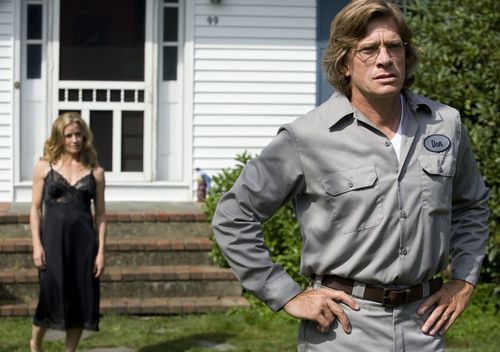 Don (Thomas Hayden Church) left his hometown 25 years ago after an unspoken tragedy. He has spent the last two and a half decades as a high school janitor, lamenting his past, when he receives a letter from an old flame, Sunny (Elisabeth Shue). She tells him that she is dying from an unnamed disease and asks that he come and comfort her during her final days. Things are definitely not what they seem when he returns to his hometown as “Don McKay.”

A fortysomething high school janitor gets a letter from his ex-girlfriend back in his home town saying that she is dying and wants to see him again. He travels to her side, but from the moment he is delivered to her door in Sammy's (M. Emmet Walsh, "Blood Simple") cab, things just don't compute for "Don McKay."

Inspired by the Coen Brothers' debut "Blood Simple," writer/director Jake Goldberger set out to write a neo-noir. This low budget oddity which features three Oscar nominees in its cast doesn't have the most tightly written script, but off kilter performances, particularly a hilariously determined Elisabeth Shue ("Leaving Las Vegas") as the femme fatale Sonny and the sinister schoolmarm whipped up by Melissa Leo ("Frozen River") as her nurse, keep things bubbling along as the plot rolls to a boil over.

Things are kind of weird at Sonny's suburban Colonial (located on Marian Drive in North Andover, MA). She lives with Marie (Leo), a buttoned up woman with a 1940's hair roll who reacts to Don like a spider protecting a rose. Pictures of Sonny within the house all cover up other, larger pictures in their frames. Sonny claims her parents died of carbon monoxide in the house while she was away. Her clothing of choice is a charmeuse slip and she looks awfully healthy for a dying woman, even if her legs do go out from under her. And then there's her doctor, Lance Pryce (James Rebhorn, "The Box"), who also has a very proprietary air about his patient and whom Don (Thomas Haden Church, "Sideways") soon finds himself locked in mortal combat with after mentioning he spent the night in Sonny's room.

"Don McKay" has a slow, sly build. We gradually learn that Don has a difficult connection to his home town, one that would make him want to lay low with police. When he begins catching Sonny in a web of lies, he leaves, but he's reeled back in. The final climatic showdown is a goofy series of creative oneupmanship. If only all the pieces fit together just a little bit better. Goldberger's weakest link is Otis Kent (Keith David, "All About Steve"), Don's best friend from childhood who goes way further out on a limb for Don that is reasonable for a friendship that's been on hold for twenty-five years. He also completely negates the final, twisty reveal as Otis would have been well aware of the truth.

But "Don McKay's" other characters work and the actors seem to be having fun playing them. Haden Church, who also exec produced, has a stoic, perplexed look throughout and a tangible loneliness that makes him someone to route for. Leo works some out there dialogue for all it's worth, then has an amusing image makeover for the film's home stretch.

The production uses minimal locations around Andover, MA, yet delivers a feeling of place. Sonny's home is weird in its utter country decor normality. Having paid attention to "Blood Simple," Goldberger's obtained a better than average score from Steven Bramson (TV's "Journeyman"), if not as memorably haunting as Carter Burwell's. Leave that to Otis's jukebox, which only plays one song and sometimes decides when to play it.

Expect the unexpected in this nifty little mystery thriller by feature film newcomer, writer/director Jake Goldberg. Don McKay, you can see from the start, is a man preoccupied with his past and unable to break the ties to it. When his high school sweetheart, Sunny, asks him to come to her, he sets off to be by her side. Cabby Samuel (M. Emmet Walsh) asks, as they drive away from the bus station, “How long are you in town for?” It is not the last time Don will hear the question and each subsequent query has increasingly suspicious and threatening undertones. Nothing is as it seems and the rollercoaster ride is a great deal of dark fun.

The cast is a pleasure to watch as each puts his and her spin on their quirky characters. Especially notable is Elisabeth Shue as Sunny. She has ups and downs, massive mood swings, outbreaks of violence and just as sudden pleads for forgiveness. It is a chew-the-scenery fun performance. Thomas Hayden Church anchors the film as the title character with his hangdog demeanor and sad face. Melissa Leo, as Sunny’s caretaker, Marie, is not what she seems and what she really is turns out to be a surprise and a hoot. James Reborn plays Sunny’s “doctor,” Dr. Lance Price, and begs the question, is he dead or not?

Greenberg’s tyro script is both dark comedy and slick whodunit and all the players do it justice. He handles his material and fine cast with a deft hand that belies his freshman status. This is a little film that, I hope, gets the notice it deserves.